Mike Pence Net Worth: How Much Is the Vice President Worth?

Home » Net Worth » Mike Pence Net Worth: How Much Is the Vice President Worth?

We all know that President Donald Trump and a few members of his administrative team are part of the billionaires club. Does that list include Vice President Mike Pence?

Currently, Pence has a net worth of $2.0 million. His net worth is made up of savings, investments, and government pension plans. One portion of Pence’s portfolio is reflected negatively, however, because of debt.

How much a governor and a vice president earn is public record. And since Pence is a public figure, he must disclose all financial manners in order to prevent any conflict of interest while serving the public. This is done through the United States Office of Government Ethics. (Source: “Executive Personnel Public Financial Disclosure Report (OGE Form 278e),” United States Office of Government Ethics, 2016.)

How Much Money Does Mike Pence Make?

Mike Pence’s previous role was Governor of Indiana, which paid an annual salary of approximately $173,900. This amount, at the time, was one of the highest salaries among all governors in the United States. With Pence having taken the role of vice president, he now handles and manages more daily duties. The position of vice president also gave him a salary boost, with Pence now earning $230,700.

Pence served the citizens of Indiana from 2013 to 2017 as governor, and he received a pension plan as part of that position. Presently, Pence has three different pension accounts, which amount to between $502,000 and $1.03 million.

The largest of those accounts is a defined benefit pension plan, and it is between the range of $500,000 and $1.0 million. When the time comes for Pence to retire, he will either receive a one-time lump-sum payment that is in this dollar range, or he will receive regular pension payments, in which the overall nominal amount would the same as if he had taken the lump sum.

The other two accounts are defined contribution plans. With these accounts, there are no fixed payments, and the payouts will be determined by how well the markets perform. These two funds are invested until 2025, at which point the money will be eligible to be taken out. The payment methods for these two accounts are similar to that of the defined benefit plan, in the sense that either a one-time payout or smaller annual payments will be made.

Currently, the two defined contribution accounts would be worth between $2,000 and $30,000. The total amount paid to Pence is able to change when it is time for him to retire. Let’s say that time comes, and the market hasn’t changed much from where it is today. The payment would remain between the $2,000–$30,000 range. However, if the markets see a boom, there could be a greater total payout than the range given above. On the other hand, if the market falls, it could result in a lower payout.

Even though Pence left his position as Governor of Indiana, he will still continue to participate in all three retirement plans. In the future, the number of his pension accounts could increase, since Pence is now serving as the vice president of the country.

Mike Pence’s Other Assets and Investments

Pence’s retirement accounts are not the only accounts in his name; he has investments that have contributed to his personal wealth.

For example, Pence has a college fund set up for his children. He and his wife Karen have three children (one son and two daughters), all of whom are in their twenties. Their eldest son, Michael, and their daughter, Charlotte, have graduated from school. Their youngest, Audrey, is currently a student at Northeastern University.

The value of the family’s education fund is $1,000 to $15,000. Since two of the children have already completed their studies, the fund has depleted to almost nothing. Once Audrey completes her studies, the value of the account could go down to zero, but that wouldn’t impact Mike Pence’s net worth at all.

Pence also has an independent investment account and a bank account, both of which are in the range of $1,000 and $15,000.

Since Mike Pence is in public office, his wife Karen must also disclose her assets and income to the government, to ensure no wrongdoing. Karen Pence owns two businesses, both of which are focused in the creative arts area. 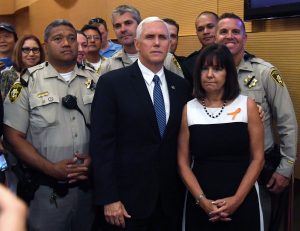 In terms of the big picture, Karen Pence’s income has no major impact on Mike Pence’s net worth.

All of Mike Pence’s outstanding debts are related to providing his children with educations. In total, Pence has seven different loans outstanding, which are in the $90,000 to $280,000 range. Even though there was an education fund set up for Pence’s children, it seems that it was not enough to pay for all of the children’s expenses.

In the coming years, it is highly likely that Pence’s net worth will increase because of the pension plan that he will receive as Vice President of the United States.

Once out of office, there are endless possibilities that could generate income for Pence, such as book deals, speaking engagements, and new business ventures. Those factors will likely positively impact Mike Pence’s net worth over the long term.