Thus, spoke Warren Buffett. The famous billionaire, the Oracle of Omaha, predicts that the market can only go up. The sky is the only limit. At a New York-based celebration of the 100th anniversary of Forbes magazine, Warren Buffett was extremely optimistic about the U.S. financial markets. It would seem he doesn’t expect economic collapse anytime soon.

The president of Berkshire Hathaway Inc. (NYSE:BRK.A) believes that the U.S. economy is in great shape. Moreover, he predicts that the Dow will hit a million points…in 100 years, that is. (Source: “Warren Buffett: Dow will hit 1 million in 100 years,” CNN, September 20, 2017.)

There’s no point in challenging Buffett. He may well be right. In fact, the Dow could even hit 1.5 million.

Who knows what the future might bring? I’m not one of those pessimists, who fears climate change—entirely natural, as many scientists believe. But I do think that even a proven master of the markets as Buffett has his limits.

Buffett Should Focus on Now, Not the Distant Future

But, even for Buffett, such speculation is pointless. Whatever high the markets will achieve, the numbers are not taking into account recession, corrections, and major market crashes such as the one we’re heading into now. The bullish investors who went to Wall Street all stocks blazing in July 1929—when the Dow hit almost 5,000 points—had no idea that by November of the same year the industrial index would be marking 3,390. 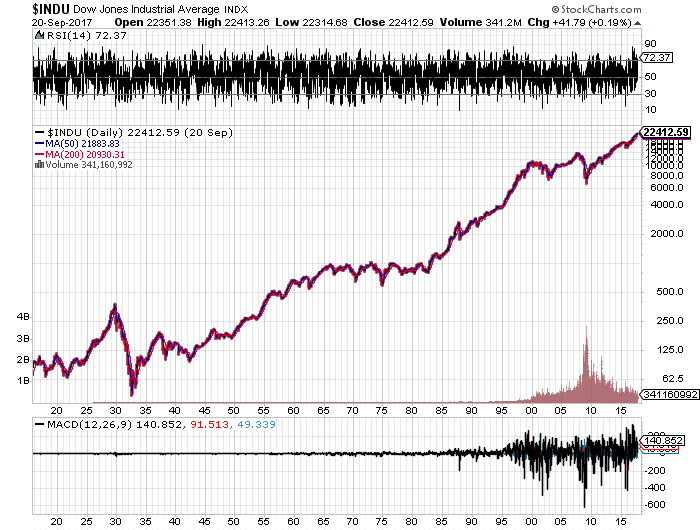 They didn’t know that by October 1932, the Dow would mark 1,130 points. They also didn’t know that before the Dow would return to 5,000, the United States would have seen a major World War, the Korean War, and the first salvos of the Vietnam War. So, even if the world lasts another 100 years—we’re getting awfully close to a potential nuclear war again—nobody knows what troubles might be ahead.

Nobody can predict how much wealth will be lost. Those investors who lost fortunes in October 1929 and who died in the 1930s or 1940s, never saw the financial recovery. So, as far as you and I are concerned now, suggestions that the Dow will go to a million aren’t helpful one way or another.

Meanwhile, Back in 2017, There Is Too Much Risk in the Market

What is more important, perhaps, is that the current market has fueled an exorbitant risk concentration. The Federal rate, Iran or North Korea, and any number of other unseen events could interrupt this mechanism. That’s when the stock market collapse will be far greater than anyone expected. The sellers will begin by deflating—bursting—the securities with the highest capitalization.

That will prompt an avalanche, which will not spare even the reasonably priced stocks. It’s only fair; after all, this is merely the reverse of what has been happening until now.

Consequently, when rates will rise, given the pervasive levels of debt, the real economy, as well as finance, will retract. That’s a polite way to describe the major economic and financial collapse that might emerge from the rubble of Quantitative Easing (QE). Janet Yellen and the Fed had hinted that interest rates would not rise until January 2018 at the earliest.

Yet, the U.S. dollar’s sharp decline against its top rival currencies (EUR/GBP) and the rising concerns over the effects of QE will likely prompt a change of schedule. Quantitative Easing will give way to Quantitative Tightening (QT). Now, how the Fed will manage QT is the $4.5 trillion question. In my view, when it comes to QT, the Fed will have to perform a difficult balancing act, trying to prevent a stock market and economic collapse.

The stock market today is more expensive by virtue of almost all metrics, price-to-earnings (P/E) especially. In practice, this means that future returns will probably be minimal, especially on a risk-adjusted basis by comparison. The recent returns seem extraordinary. Still, stocks are rather sensitive to a negative change in the fundamentals and they absorb pessimism even more than unbridled optimism.

If Global Economy Slows Down, Investors Must Know These 3 Things

U.S. National Debt a Major Problem, Getting Bigger Every Second