https://www.lombardiletter.com/warning-ignoring-inflation-making-big-mistake/26304/ Warning: If You Are Ignoring Inflation, You Could Be Making a Big Mistake Moe Zulfiqar, B.Comm. Lombardi Letter 2018-02-13T09:06:23Z 2018-02-14 11:14:56 inflation fred U.S. treasury bond inflation in 2018 Inflation could become a major problem in 2018. Its already spooking investors and could really have severe consequences across the board. Here’s the full story. Inflation,News,U.S. Economy https://www.lombardiletter.com/wp-content/uploads/2018/02/Inflation-150x150.jpg

Warning: If You Are Ignoring Inflation, You Could Be Making a Big Mistake

Home » Inflation » Warning: If You Are Ignoring Inflation, You Could Be Making a Big Mistake

Inflation could become a big problem ahead. Don’t ignore it. Long-term Lombardi Letter readers have been warned about this already.

Why worry about inflation?

Go back to 2009. At that time, the Federal Reserve jumped in to help the struggling U.S. economy and troubled financial system. If the Fed didn’t do anything, the global financial system could have collapsed, and we could have seen a more severe global recession—maybe an outright depression in the United States.

How did the Fed help the U.S. economy and the financial system?

The Federal Reserve had the printing presses running at a very fast speed. It dropped the interest rates and started to print money out of thin air. The Fed bought the bad debt from the banks and gave them cash.

Basic economics: when a central bank prints money, a high period of inflation generally follows. Mind you, there’s really no rocket science behind this; the more money circulating, the less valuable it becomes.

In other words, the Federal Reserve set the stage for higher inflation right after the financial crisis.

To give you some perspective, look at the chart below. It shows the monetary base in the U.S. economy. Think of this figure as how much currency is circulating in an economy. This is the most basic form of money supply. 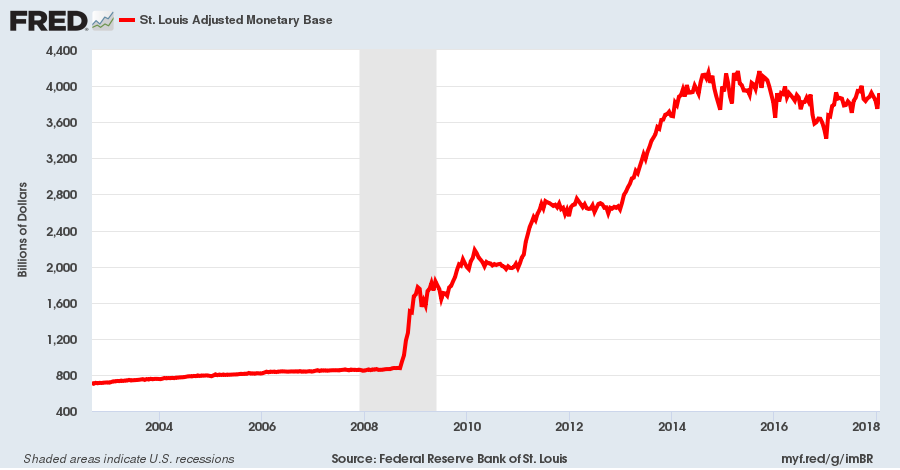 Before the financial crisis, the U.S. money supply was around $800.0 billion. Now it’s close to $4.0 trillion. This represents an increase of 400% in a matter of just a few years. This is unprecedented.

Note: the money that the Federal Reserve gave to the banks wasn’t really put to use. The banks just bought U.S. government bonds with the proceeds. It made financial sense for the banks.

Why talk about the Fed’s money-printing now?

Remember, in an economy like the U.S., things usually take a while to play out.

It’s impressive how quickly investors forgot about all the money that was around. We were told it’s nothing to worry about. But, at its very core, we had severe monetary inflation in the making.

Dear reader, don’t be shocked if the money that was sitting around all these years starts to do what it was supposed to do: show up in the form of inflation.

We are already seeing bond investors getting nervous about inflation. You see, inflation is bonds’ biggest enemy. If you look at bond yield, it is soaring. Bond investors are spooked. Look at the chart below of the yield on the 10-year U.S. Treasury, for example.

Since July 2016, yields on 10-year U.S. Treasuries have soared by over 130%. Bonds are saying we have inflation ahead.

Inflation data is starting to turn as well. 2017 was the second year in a row during which the U.S. economy had inflation of over two percent.

I suspect we could see spiking inflation in 2018. If inflation spikes, first and foremost, it will impact the buying power of Americans. This could impact overall consumption. Also, it could cause a massive sell-off in the bond market.

I am also keeping a close watch on gold prices. If inflation follows, gold prices could really surprise investors. It’s really an undervalued asset and, over the past few years, it got sold because no one expected inflation to make a comeback.