The U.S. Housing Market Is Emerging as a Clear Victim of Higher Interest Rates

Readers of Lombardi Letter have been warned that, as the Federal Reserve raises interest rates, there will be several victims. We are seeing one victim emerging very clearly: the U.S. housing market.

Consider that in July, sales of already-built homes declined 0.7% from a month earlier. Year-over-year, sales are down 1.5%.

Here’s the thing, this is not a one-off event. On a year-over-year basis, July marked the fifth consecutive month of declines in existing home sales. There’s a clear trend here.

Lawrence Yun, the chief economist at the National Association of Realtors, said something very interesting about what’s happening in the U.S. housing market: “Too many would-be buyers are either being priced out, or are deciding to postpone their search until more homes in their price range come onto the market.” (Source: “Existing-Home Sales Slip 0.7 Percent in July,” National Association of Realtors, August 22, 2018.)

If you’re not convinced that higher interest rates are harming the U.S. housing market, look at the chart below. It plots the annual rate of new home sales in the U.S. economy.

People who are very close to the U.S. housing market, the home builders, are becoming pessimistic too.

Look at the National Association of Home Builders’ Housing Market Index (HMI). At its core, it shows us the sentiment of home builders in the U.S.

Why Bother With What Happens in the U.S. Housing Market?

Things haven’t really turned dire in the housing market, but we are already seeing the selling of home builder stocks. Look at the stock chart below of Toll Brothers Inc (NYSE:TOL), a well-known home construction company with a presence across the United States. 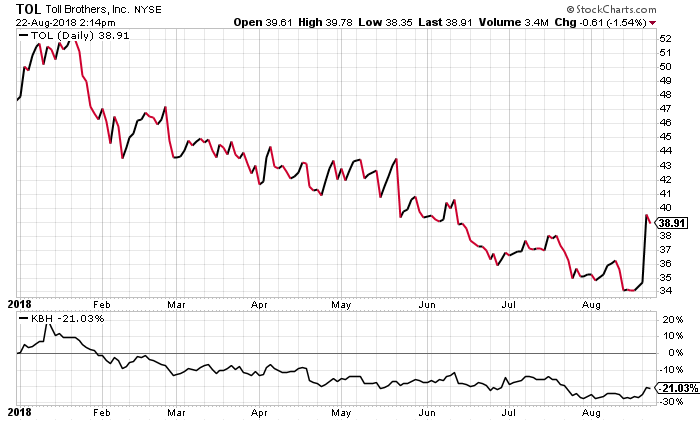 Year-to-date, the Toll Brothers stock price has declined by over 21%.

You see, right now, no one cares much about the housing market data. You really have to wonder what will happen when the data starts to matter.

I continue to watch the U.S. housing market very closely. As I said earlier, it could impact the overall U.S. economy and homeowners. It could also hurt the portfolios of investors who hold home builder stocks.