https://www.lombardiletter.com/us-economy-taking-wrong-turn-job-numbers/32387/ Economy Taking a Wrong Turn: Just Look at the Recent Job Numbers Moe Zulfiqar, B.Comm. Lombardi Letter 2019-10-11T07:02:00Z 2019-10-11 06:52:12 It looks like the U.S. economy could be very fragile and not going in the right direction. Be very careful. If the U.S. economy breaks, there could be dire consequences. Here are the details. U.S. Economy https://www.lombardiletter.com/wp-content/uploads/2019/10/Job-Numbers-Show-That-the-U.S.-Economy-Is-Taking-a-Wrong-Turn-150x150.jpg

On a daily basis, we hear that everything is great in the United States economy. This, however, could be really far from reality. The U.S. economy may have been good a few years ago, but it doesn’t seem that way now.

Why have such a negative view? The data is very loud and clear that things are not so great anymore.

One of the best examples of this is the September 2019 jobs report. It showed that are cracks forming.

The politicians may tell you to look at the job gains, but don’t ever focus on just a one-month change and come to a conclusion. Watch the trend.

Looking at this, one could say the job growth rate in the U.S. in the past three months has declined by close to 17% year-over-year.

But don’t get too fixated on just these three months. It wasn’t too long ago that the U.S. economy was adding well over 200,000 jobs a month on average.

What do these job numbers say? Businesses in the U.S. are starting to pull back on hiring, so job growth has stalled. That’s bad news for the economy to say the least.

Job Cuts Could Be Just Around the Corner

However, this isn’t all. Some sectors of the economy are showing dismal job figures. The net job gains that we see now could turn into job losses.

The manufacturing sector in the U.S. has come under a lot of fire recently as well. Not too long ago, we learned that manufacturing activity in the U.S. economy is actually contracting. There hasn’t been an outright decline in manufacturing jobs, but don’t rule it out yet.

Beyond this, look at the construction sector in the United States. Construction spending has been declining.

See at the chart below. It plots the year-over-year change in construction spending. 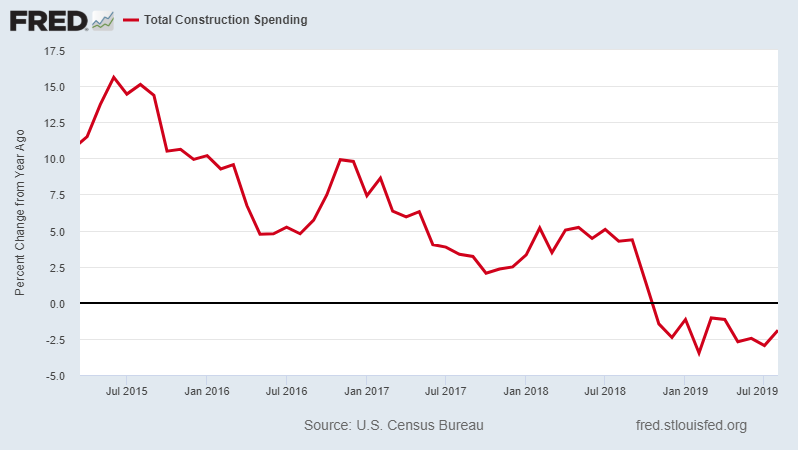 Since November 2018, U.S. construction spending has been outright declining. Don’t you think job cuts could be ahead? Its very possible.

Dear reader, I continue to see economic conditions get worse in the United States. Those who say all is great could be very wrong and not paying attention to the details.

The U.S. economy is fragile at the moment. Cracks in the economy are getting bigger. I am nervous about what will happen in the case we see some sort of shock that shakes the economy further. Will it all fall apart?

This 1 Trigger Could Cause a Recession in the U.S. Economy in 2020