The 12 districts were evenly split between modest and moderate, with growth in freight shipments slowing and businesses expecting price growth to be mild to moderate over the coming months.

Goldilocks Economy Is More of a Nightmare

The Fed has raised its key interest rate twice since December, saying the U.S. economy is on solid ground and inflation is inching its way toward the central bank’s two-percent annual target rate. That said, there is still some debate as to how quickly the Fed should raise its key lending rate in this period of modest economic growth.

Williams also said that it’s time for the Fed to move from obsessing about “How do we achieve a sustained recovery?” and focus instead on “How do we sustain the recovery we’ve achieved.” (Source: “Fed’s Williams: Don’t rule out more than 3 rate increases in 2017,” Financial Times, March 29, 2017.)

The recovery we’ve achieved? The U.S. economic recovery might be in its eighth year, but it’s the slowest economic recovery since World War II. Under President Barack Obama, annual gross domestic product (GDP) averaged two percent. In his last year in office, it was a princely 1.6%. Moreover, Obama is the only president to never have presided over a single year of three-percent GDP growth. 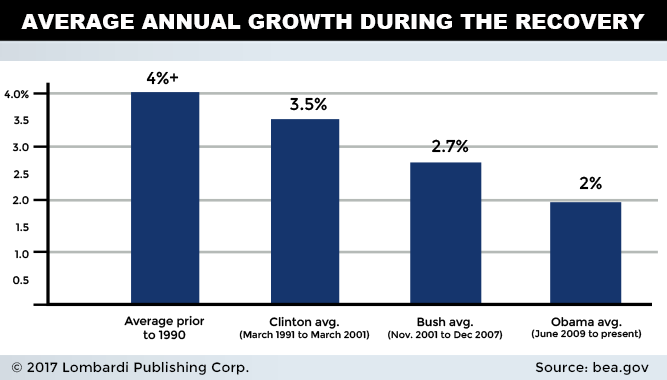 In addition to household debt levels approaching pre-Great Recession levels, savings have been depleted, and nearly half of all Americans have no retirement savings. During the economic recovery that Williams wants to sustain, the poverty rate has soared. Six million more Americans are living in poverty than when President Obama entered the White House.

As the U.S. economy struggles, wage growth continues to stagnate and more Americans are living in poverty, it’s nice to see that Williams, who earns more than $430,000 a year, can relate to the average American.

“Before, we had our foot pressed down on the gas pedal trying to give the economy all the oomph we possibly could”.

Adding, “Now allowing the economy to kind of coast and remain on an even keel – to give it some gas but not so much that we are pressing down hard on the accelerator – that’s a better stance of monetary policy.”

Who wouldn’t want to let the world’s biggest economy coast on 1.6% annual GDP? Not everyone is convinced the U.S. economy is on solid ground and ready to run. According to the Atlanta Fed, the U.S. economy is on pace for the slowest growth in two years. It currently believes first-quarter real GDP growth will be just 0.5%. In early February, the Atlanta Fed predicted first-quarter GDP would come in at 2.7%. (Source: “GDPNow,” Federal Reserve Bank of Atlanta, April 18, 2017.)

The Federal Reserve districts cannot really come together with an opinion on how strong the U.S. economy really is; evenly split between modest and moderate. The Atlanta and New York Feds might be miles apart with their GDP forecasts, but they both see the U.S. economy as getting worse.

If, after trillions in quantitative easing, this is what the Goldilocks economy looks like, then the average American has nothing to look forward to until the next economic recovery begins.