The U.S. stock market has benefited from low interest rates for a quite a while. But now, it looks like the good times are about to end.

Moreover, note that as investors sold shares of stocks in every sector, both the S&P 500 and the Dow fell below their 50-day moving averages. In technical analysis, the 50-day moving average is often considered the dividing line between a stock’s uptrend and downtrend.

One of the reasons behind Friday’s sell-off is the potential of an interest rate increase by the U.S. Federal Reserve. The Federal Open Market Committee (FOMC) is scheduled to have a two-day policy meeting later this month. It is uncertain whether the U.S. stock market can handle another rate hike.

“The Fed is clearly on a choreographed path; it wants to raise rates this year,” commented Art Hogan, chief market strategist at Wunderlich Securities. “What the market is trying to re-calibrate is whether that means September or December.” (Source: “Stock sell off, all 3 major indexes post worst day since June 24; Fed fears loom,” CNBC, September 9, 2016.) 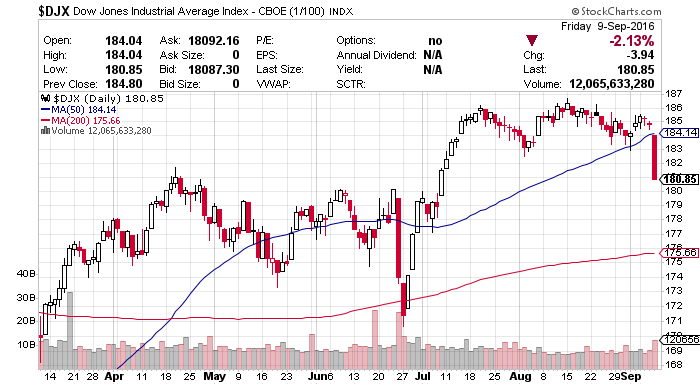 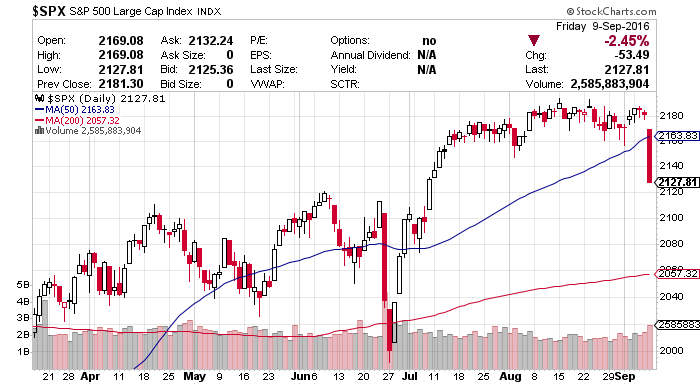 Events in Europe might also have had something to do with Friday’s tumble. On Thursday, the European Central Bank announced that it would leave its €1.7-trillion stimulus package unchanged. Previously, many analysts were expecting more easing from the ECB.

While the tumble was nothing compared to the gains in those indices in the past few months, one analyst says that this could spark a turn of events.

“I think this might be the beginning of a correction,” said iSectors’ chief investment officer, Chuck Self. “When you look at the sectors, it’s a decently broad decline.”

The analyst said that Monday, “could be a pretty ugly day as well.” (Source: Ibid.)