Decades of Unsustainable Growth Could Trigger a U.S. Recession in 2018

Home » Analysis and Predictions » Decades of Unsustainable Growth Could Trigger a U.S. Recession in 2018

Unsustainable Growth in Just About Everything Will Cause Make the Next U.S. Recession Worse

Economic growth. It’s the key to making the economy tick. Without it, everything falls apart. Pensions get underfunded, debt liabilities spiral out of control, and a general malaise sweeps across the land. Perhaps that’s why the powers that be have done everything to prevent a hard recession. But 17 years into accommodative financial conditions (some would argue since the Black Monday Crash of 1987), will unsustainable growth in fiscal policy cause a harsh U.S. recession? It’s definitely possible.

The genesis of financial intervention can be traced back to March 18, 1988 when the Working Group on Financial Markets (WGFM) was formed. This is also known as the “Plunge Protection Team” in some quarters. Its mandate was simple: prevent another financial episode like the one that occurred on October 19, 1987. On that day, chaos reigned in the financial markets. The Dow Jones Industrial Average (DJIA) lost almost a quarter of its value (22.6%) or $500.0 billion in market capitalization that day.

So what does this actually mean and why should investors care? Both are important questions since the Federal Reserve exercises immense unpublicized control over the financial system. Essentially, the WGFM is free to pursue strategies to help stabilize the financial market and buffer it from shocks. Whether that means purchasing derivative swaps or equities directly, or expanding credit facilities, we’re unsure. The organization is famously secretive. It was designed to instill more confidence in investors by preventing crashes from getting out of control.

All this sounds OK in principle. After all, one of the Central Bank’s main tasks is to smooth out the sour phase of the business cycle. But the problem is, things have gotten out of hand.

The monetary intervention designed to allay hard times has become normalized. For example, the Fed lowered its benchmark Fed Funds rate to almost nothing for seven years, stoking the credit bubble to enormous heights. It wasn’t enough to keep rates low for a year or two, then normalize. In other words, low rates have become institutionalized.

Exceptionally low interest rates are the straw that stirs the drink. It has its tentacles in everything. It’s allowed consumers to purchase goods they couldn’t afford. It’s allowed corporations to finance billion-dollar stock buybacks they otherwise wouldn’t attempt (asset inflation). It has facilitated margin debt to explode to near record levels. When the cost of money is cheap, gross misallocation of capital becomes a big problem in the economy. The money changers will start chasing anything with a yield. This makes the economy less efficient over time and promotes debt expansion.

The truth is, an upcoming U.S. recession was going to occur regardless. It’s a natural and necessary event to purge the excesses out of the business cycle. But our financial masters are so fixated on keeping the economy growing forever that they’ve over-involved themselves in the process. By allowing these conditions to fester, the Fed has guaranteed the next recession will be worse.

To avert disaster, they will need to pull an even bigger rabbit out of their hat. If you thought direct Central Back stock purchases, Troubled Asset Relief Program (TARP), Operation Twist et al were big, just wait until the next crisis strikes. Debt and credit expansion on all levels of society has grown that much more. Ergo, it will take that much more debt spending to return conditions to “normal.” 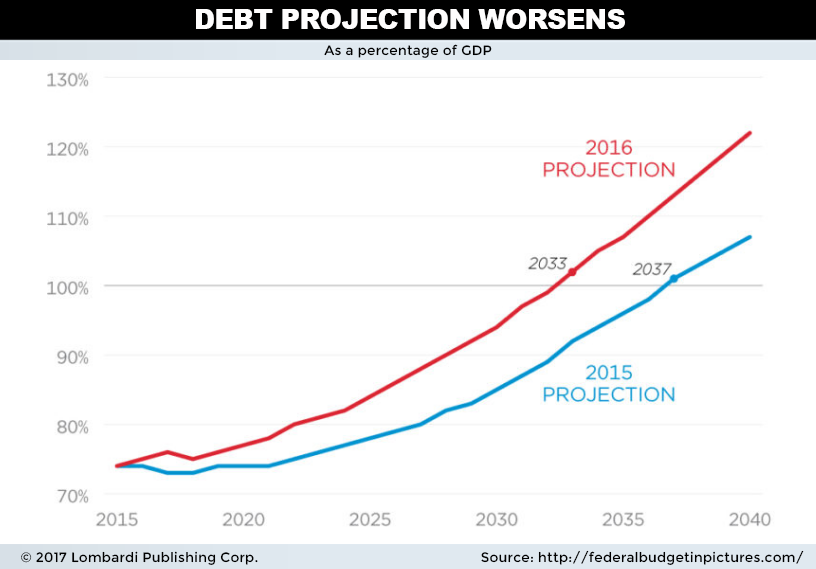 Unsustainable Growth a Major Factor That Would Cause a U.S. Recession in 2018

Other areas of the market also exhibit signs of unsustainable growth. Take the unbelievable growth in Exchange Traded Funds (ETFs) in recent years.

Just this past week, growth funds saw a record $4.0 billion’s worth of inflows. This is on the back of record ETF inflows in the first two months of 2017, and 2016 inflows, which obliterated past amounts. There doesn’t seem to be any end in sight, despite numerous high-profile analysts sounding the alarm on valuations. It’s almost like investors are willfully blind. Ignorance is bliss as long as the capital gains keep rolling in. (Source: “ETFs focused on growth strategies enjoy record weekly inflows,” MarketWatch, July 14, 2017.)

Until recently, auto sales were exceptionally strong. But reality has struck the sector head-on. After experiencing record unit sales in both 2015 and 2016, a sharp retrenchment is occurring. New data by Morgan Stanley (NYSE:MS) estimates new car sales could tumble by 22%, or 4.2 million units, in the next four years. The unsustainable combination of record incentives of ultra-low (zero in many cases) financing have pulled demand forward. (Source: “Morgan Stanley Warns Of “Unprecedented Buyer’s Strike” In Autos; Slashes Car Sales Forecast,” ZeroHedge, June 9, 2017.)

The implications for the auto industry are staggering. Ten of thousands of auto jobs (and related industries) will be slashed in the U.S. as a result. The openings salvos have already started. Ford Motors Company (NYSE:F) chief financial officer, Bob Shanks, is on record talking up the possible of idling several factories as a way of reducing inventory. This on top of at least 6,000 job cuts Ford has doled out since December 2016.

Negative growth in new car sales isn’t uncommon near the end of the business cycle. But again, it was the unsustainable splurge in consumer buying—egged on by low financing costs and dubious loan standards—which is noteworthy.

The same dynamics are at play with consumer durables. Demand for durable goods in general is tumbling. These are the types of high-value purchases people make when they feel they can afford them, or service additional debt spending. These include things like appliances, firearms, automobiles, all terrain vehicles et al—“confidence” items purchased in times of expansion. Following the lead of crashing auto sales, it too is signaling possible U.S. recession 2018.

Since the cycle high in July 2015, new orders have fallen about seven percent to date. While this doesn’t guarantee a recession will take place, slowing consumer spending could easily spill over to something bigger. This data takes on additional meaning since it isn’t one or two poor months. It shows a pattern of lower highs, which is two years in length. This shouldn’t be happening to this degree at the end of an historic business expansion. The leading culprit? Future demand being pulled forward by people financing on easy credit, even if they don’t particularly need the purchase. People want their stainless steel refrigerator with a built-in ice cube dispenser, even when the old “Frigidaire” will do.

Lastly, we present undeniable evidence of unsustainable excesses in the financial housing system. This comes from none other than Federal Reserve Governor Jerome Powell. He believes that systematic risk to the nation’s housing market remains intact given high concentration of mortgages in Fannie Mae and Freddie Mac. These quasi-government issuers aren’t exactly known for their robust lending standards. “We’re almost at a now-or-never moment” said Powell, arguing that time is running out to overhaul the housing finance system. (Source: “Fed’s Powell says current US housing finance system ‘unsustainable’,” CNBC, July 6, 2017.)

The truth of the matter is, the causes of economic recession in 2018 will be a slowdown of unsustainable growth in several markets. Whether it’s housing, auto sales, or the general pace of “consumerism,” the root cause of credit expansion made possible by low interest rates will get corrected. The Fed may conspire to keep rates low, but they can’t control the demand side of the equation.

Consumers and businesses can only take on so much before they must de-lever (or at least stop taking on new debt). It’s somewhat similar to eating a meal. If you haven’t eaten for awhile, you’re hungry and have the capacity to fill your stomach with an ample supply of food. But after you’ve devoured that four-course meal, your ability to eat is restricted. No matter how much you may want to keep going, it’s uncomfortable to do so.

In this case, the beginning of the business cycle is akin to an economy on an empty stomach (post-recession recovery in late 2009), while the end of the business cycle (now) is akin to an economic stomach that’s full. After gorging on debt for over eight years, there’s little ability for participant to buy more things, even though food (low interest rates, liquidity) is plentiful. The old axiom about the Fed “pushing on a string” comes to mind.

Is another recession looming? Certainly, but that’s not the real story. One would have been looming either way. Recessions are both a natural and essential part of the business cycle.

The real story is how bad it’s going to be. Considering none of the debt issues or excesses have been solved, it’s going to be worse. The effects of economic recession will devastate the stock market this cycle, because financial excesses have manifested themselves most there. Equity valuations have built up like a house of cards. Once the winds of economic change start blowing, they will topple.

We urge our readers to prepare accordingly.

These Factors Could Shock the System & Even Cause a Financial Crisis