Three Indicators Pointing to a Recession for the U.S Economy

Mark my words, the U.S. economy could be headed toward a recession, not economic growth. There’s a lot of data suggesting that an economic slowdown could be imminent in late 2018 and early 2019.

There are three data sets that are worth watching closely: construction spending, car sales, and exports.

Longtime readers of Lombardi Letter shouldn’t be too surprised by this. We have talked about construction spending extensively in these pages.

Car sales in the U.S. economy are worth watching, too. Why? Because it shows how U.S. consumers are feeling. It’s essentially an indicator of consumer spending and consumption. More cars being sold could be taken as consumers feeling good about spending. On the other hand, if car sales are declining, it means a recession could be looming.

Please look at the chart below. It shows the year-over-year percentage change in monthly total vehicle sales in the U.S. economy. 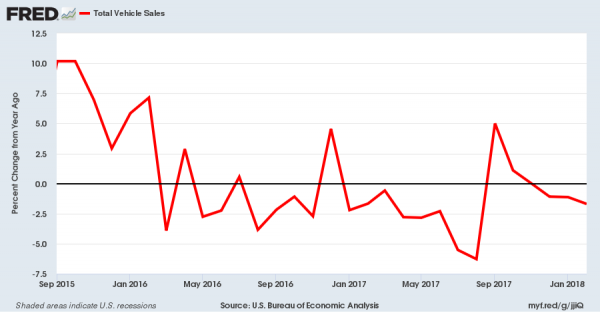 Since late 2017, total vehicle sales have been declining. This is really bad news for the U.S. economy.

Exports are also critical to watch. In 2017, the U.S. economy exported $2.2 trillion worth of goods to the global economy (remember, exports are great for GDP).

Look at the chart below; over the past few years, exports have soared. 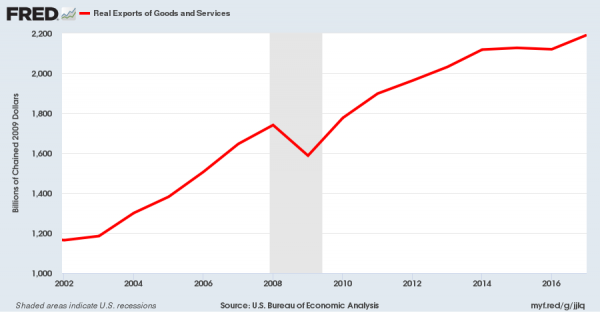 Now, President Donald Trump is talking about trade wars with China and other countries. This could really impact the exports from the U.S., and it could directly influence the country’s economic growth rate, dragging it lower.

Dear reader, looking at the three factors mentioned above, in addition to other economic data, it’s very difficult to be optimistic about the U.S. economy.

I completely understand that calls for a recession in late 2018 and early 2019 may sound irrational at this moment. I suggest that you don’t pay attention to the noise, but rather look at the data. It suggests that something wicked this way comes.

If a recession does start to become reality, I question how the Federal Reserve will react and what stock investors will do. Will we see interest rates drop again, and/or quantitative easing? Will investors rush to sell? Will we see a stock market crash?

Obviously, with time we will know more. But in the meantime, don’t get too complacent. Keep a close eye on the economic data.