If Americans want to learn anything about the economy and the markets for 2017, look to the past few weeks. Last January, it started to dawn on people that the Trump tax plan—fiscal stimulus—and the Obamacare repeal are still in limbo. Cautious observers, therefore, will ponder before delivering a bullish U.S. GDP rate forecast for 2017.

There are valid reasons to urge caution about the U.S. GDP growth outlook or the U.S. real GDP growth rate. Many of the analysts who were bullish about Trump’s economic plans were too optimistic too soon. It’s almost as if they expected the GDP growth rate to shoot up to five percent overnight from Inauguration Day.

A necessary retreat into reality suggests investors should not expect a five-percent U.S. GDP rate forecast for 2017. Nor should they expect four or even three percent anytime soon. There are simply more obstacles than there are incentives. Given the rising global geopolitical uncertainty, the impact of a “black swan”-type risk seems likely.

There’s little to celebrate about the state of the U.S. economy, at least for now. In the fourth quarter of 2016, the U.S. economy was slowing down. It grew by just 1.9% on an annual basis: a sharp turnabout compared to the growth rate of 3.5% in the third quarter and below even the expected 2.2%. (Source: “GDP shows economy slows to 1.9% growth,” MarketWatch, January 27, 2017.)

In 2016, moreover, the U.S. GDP growth was less than three percent for the 11th consecutive year. The last time the growth occurred at a three-percent rate was in 2005—before the 2007/2008 financial crash. It’s true that Trump has not had enough time yet to revitalize the economy. However, the markets are seemingly drunk on expectation. 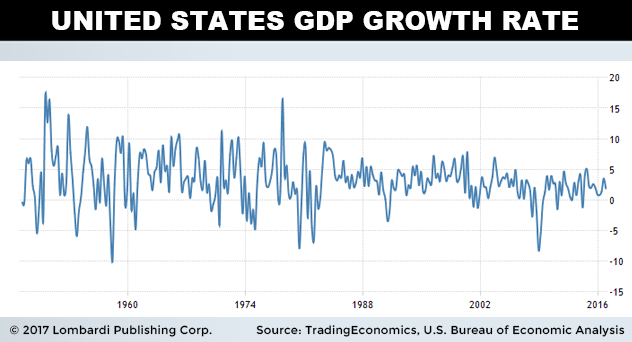 In 2016, the GDP growth rate was just above 1.5%. More significantly, from the analytical perspective, it was a full percentage point lower compared to 2015. Still, the Dow recently exceeded 20,500 points—and all this while the U.S has taken on a bagful of new risks since Trump landed at the White House.

Why Has the U.S. Real GDP Growth Rate Slowed?

Surely consumption and business investment have reported solid growth. This should have helped sustain the economy. Indeed, consumer spending, one of the most important economic barometers, rose by 2.5%. Meanwhile, American companies were clearly feeling optimistic about the economy, because they have been investing in equipment more than at any time in the past year and a half.

Meanwhile, the real estate and construction market has also seen improvement. Builders of homes have increased investment in new properties at a rate of more than six percent in 2016. That is certainly good news. Except for the fact that in 2015, that growth rate was over 8.3%. (Source: “2016 U.S. and Canadian Construction Performances in Review,” Daily Commercial News, February 13, 2017.)

Should Trump manage to push his infrastructure plans, those figures could improve, but there are many questions still about where the money will come from. Meanwhile, the trade deficit increased in 2016. There’s little to suggest that can improve, given Trump’s propensity to cancel major existing trade agreements while avoiding getting the U.S. in new ones.

Of all the factors affecting the U.S. economic outlook, trade is the one that could experience a transformation for the ages. Trump promises to undo almost thirty years of trade agreements, starting with the North American Free Trade Agreement (NAFTA). It’s not just the Trans-Pacific Partnership (TPP) trade deal from which Trump has pulled America out.

The United States remains the world’s top economy. Because of that, any major macroeconomic move out of Washington will generate global shock waves. A protectionist U.S. will trigger a fight-or-flight mechanism. Therefore, other major economic blocks will also advance a protectionist agenda within their own boundaries.

Trump’s growth recipe is not as easy as putting enough tariffs on imports. American goods will face corresponding measures in key markets. America’s largest exporter by dollar amount is Boeing Co (NYSE:BA). Boeing stock is literally flying at record highs now. China is its top market for the future, given this country’s appetite for planes.

Estimates suggest the country’s demand for airliners could exceed a trillion dollars over the next 20 years. But if the U.S. starts making the market difficult for Chinese imports, Chinese authorities may start wondering why they should buy from Boeing and not from Airbus Group SE (EPA:AIR). After all, both offer exceptional equipment and similar prices. This calculus can apply to any number of goods.

But trade is just the first link in a long chain of epochal transformations over the next few years. Apart from trade agreements making the market tougher for U.S. exports, the higher U.S. dollar won’t help. Not only is the dollar going up, but there’s no telling how high it could go compared to rival currencies like the euro, the yuan, or the yen.

The reason is that the dollar has moved higher not only because of speculation about what Trump’s economic policies might bring. Interest rates have moved higher for the first time in a decade. From zero, Federal Reserve Chair Janet Yellen seemed determined to announce at least two—if not three—rate hikes in 2017.

It’s no surprise that in the fourth quarter, exports fell by 4.3%, while imports rose over eight percent—the highest increase in two years. (Source: “BEA: 2016 GDP growth worst since 2011, dives a full point from 2015,” Hot Air, January 27, 2017.) The dollar is heading in precisely the wrong course for Trump’s economic growth plans to materialize.

The combination of high tariffs—and reciprocal protectionism—and higher interest rates makes the imports so tempting. The dollar has certainly not been performing according to President Trump’s interests. That’s ironic, because much of the dollar’s rise has resulted from the very fact that Trump was elected in the first place.

Therein lies the risk. The expectations surrounding Trump’s economic growth potential are daunting. Investors expect massive expansionary fiscal policy maneuvers. These include the unlikely combination of massive corporate and individual tax cuts and massive infrastructure spending. Investors have appreciated the decidedly pro-growth policy, but they have forgotten to ask where the government will raise the money to achieve Trump’s vision.

The basic formula explaining the relationship between Trump and the high dollar is simple. Trump will bring growth; thus, inflation will rise and the Fed will raise interest rates to manage it. But, like all equations applied to economic phenomena, they always miss the role of chance, of unforeseen major risk. Sometimes they miss rather obvious concerns.

Trump should fear the hype surrounding his plans. Incumbent politicians lose elections more for failing to deliver on promises than for any unforeseen mistakes. Trump wants to make America great again. That’s an admirable goal, but he will have to confront the side-effect of that promise. Trump’s economic plan will have to shift less on greatness and more on how the U.S. will react to the escalating currency war that the president has activated with his protectionist approach.

In fact, the big question to get a sense of the U.S. real GDP growth rate is whether Trump will be able to accelerate economic growth without pushing the dollar to unsustainable highs. Certainly, the inflation component is matching expectations. In the fourth quarter of 2016, it rose at an annual rate of 2.2%. This makes the Fed’s rate hike inevitable.

However, there are indications from tax revenues that the United States might be stumbling onto another recession. The stock markets haven’t noticed yet, but the fall will be hard when they do. It won’t be enough for Trump to tweet America’s way out of it.

These are the very situations that produce the worst financial collapses. The Trump Tax plan is great on paper; it’s certainly much more appealing than what Hillary Clinton was proposing. The problem is that it might be too good. And it’s always from a beautiful blue sky that the harshest storms come.

This is the type of environment in which stock market crashes occur. The chances of a market crash are increasing. The current financial and economic environment has lent itself to great vulnerability in case of a black swan event. This is more so than at any other time since the last financial collapse in 2007/2008.

For the record, a black swan is an event that satisfies three characteristics: it is rare, its impact is extreme, and it can only be recognized as such in hindsight; it is undetectable at the moment of impact.

One of the sources of the next black swan might be from Trump’s foreign policy. It’s unclear where President Trump wants to go with his anti-Iran rhetoric. But there can be certainty about one thing. Should Trump scrap the nuclear deal that Obama signed and leave it open, he will enter a path of no return by having to attack Iran.

The attack would likely focus on Iran’s nuclear research facilities, but Iran would retaliate. The obvious first act would be to block shipping traffic in the Strait of Hormuz. That would cut off oil supplies to many U.S. allies in the Pacific Basin. It would cause oil prices to spike and damage the economies of many emerging markets. Eventually the contagion could spark a financial crisis on Wall Street… and a recession on Main Street.