Had Democratic presidential candidate Hillary Clinton won the 2016 election, the U.S. economic outlook for 2017 might have been simply precarious. But with an unhinged administration in the White House, the possibilities have become outright treacherous.

Little discourse emerged during the campaign suggesting that Clinton would have diverted from Barack Obama’s economic road map. While growth was tepid–indeed, the worst economic recovery since World War II–at least it was consistent.

In the first full year after the U.S. housing market crisis, which caused the U.S. economy growth rate to contract, real gross domestic product (GDP) growth rose between 1.2% and 2.7%. Not a world-beater by any stretch, but with overall tame inflation and low unemployment, it didn’t feel too bad (the questionable quality of job creation and the sanitized method used to calculate employment statistics, we’ll leave for another debate).

Unfortunately for Wall Street analysts and U.S. Federal Reserve model pushers, the 2017 economic outlook forecasts became more daunting due to the election of Donald Trump as President. A tremendous amount of systematic risk entered the financial system, potentially throwing a wrench into the cogs of U.S. economic order. This has predominantly manifested on two key fronts: legislation and free trade.

The first such risk exists on the legislative front. Significant legislative tabling is expected to be introduced in U.S. Congress. Republicans are expected to fast-track several different initiatives through the legislative process. These policies will have a profound impact on the 2017 economic forecast because, in some cases, the way that whole industrial sectors do their business will be at stake.

While Republicans own majority representation in Congress, Trump adversaries Paul Ryan and Mitch McConnell are leaders of the House and Senate, respectively. Both have histories of antagonistic dealings and ideological conflicts with Trump, despite belonging to the same political party.

As one example, McConnell famously castigated Trump in the general election lead-up, stating in a June 2016 interview that Trump, “clearly needs to change” and was, “not yet a credible candidate,” while praising Hillary Clinton as “intelligent and capable.” (Source: “McConnell Says Trump is Not Yet a ‘Credible Candidate’,” Spectrum News NY1, June 28, 2016.)

Unfortunately, Trump doesn’t just have a prickly relationship with McConnell, but also with several other members of his coalition. Numerous Republican senators have either been linked to the “#NeverTrump” faction or have opposed Trump publicly in the past. These include Ben Sasse (Nebraska), Jeff Flake (Arizona), John McCain (Arizona), Susan Collins (Maine), Lisa Murkowski (Alaska), Rob Portman (Ohio), and Lindsey Graham (South Carolina).

As such, there’s no guarantee that Trump will be able to strong-arm his agenda through both chambers, even with Republicans having majorities in both chambers. A deadlocked Congress could send small business and consumer confidence crashing, deeply affecting consumer purchasing and business capital expenditure (capex) spending.

However, the risks of legislative malfeasance to the economy is dwarfed by the risks posed by protectionist attitudes espoused by the President.

According to World Bank data, the sum of exports and imports of goods and services measured as a share of GDP in the United States was just over 28% in 2015. Without this, total U.S. economic output would drop to $12.98 trillion from $18.03 trillion, where it stood in 2015. The unencumbered flow of goods between nations is a huge deal and, is in fact, a major driver of domestic economic activity. 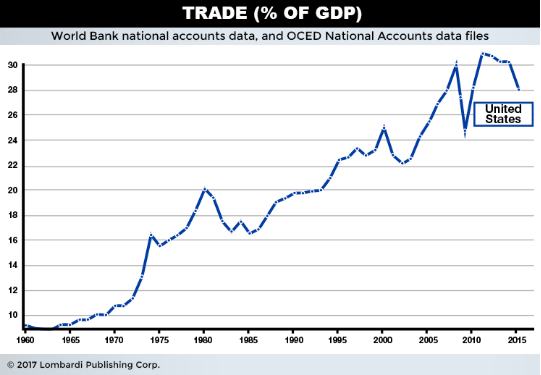 And this is where things get dicey.

Trump campaigned heavily on an “America First” protectionist agenda deeply at odds with the tenets of global free trade. His stated mission is to bring jobs back to the United States while attempting to revitalize the glory days of America’s manufacturing past. Unfortunately, this aggressive stance is fraught with unpredictable results, which could tank U.S. economy forecasts by throttling trade and devastate earnings expectations of many Fortune 500 companies.

Specifically, Trump has threatened to impose 35% tariffs on goods produced, not only by U.S. companies, but perhaps all imports, even if they are produced by European or Asian companies. Trump advisor Newt Gingrich is on record saying, “The only question is does that tax apply to everybody? So if you’re Toyota or you’re Mercedes or whatever are you also going to pay that tax? I suspect the tax will apply to all imports.” (Source: “Trade war fears as Trump’s suggested 35% goods-abroad tariff is expected to hit,” Financial Post, December 5, 2016.)

Follow-through of these policies would undoubtedly have a crippling effect not only domestically, but on global economic growth as a whole. Any effort to implement tariffs on imports would surely spark retaliatory measures from trading partners, creating a vicious circle of tit-for-tat reactions, affecting industries of increasingly greater significance. The World Bank estimates that GDP will rise 2.7% globally in 2017.

For the sake of argument, even if Trump, through the threat or implementation of trade tariffs, was able to offset its negative effects by boosting manufacturing output and jobs domestically, there’s the issue of U.S. inflation. With unemployment near natural levels (below five percent), immense upward pressure on wages could result, boosting sticker prices where applicable. Americans would also face spiralling input material costs on commodities which it does not produce.

As the plurality of Americans do not have $500.00 in savings to cover emergency expenses, input price inflation could have devastating consumer spending effects. As always, the bottom levels of the economic pyramid are most affected.

The problem is, analysts are mainly fidgeting with ancillary variables in their models, as opposed to factoring in tangible “black swan”  types of scenarios. Do they not believe these risks exist?

Perhaps they didn’t at first. Perhaps they thought Donald Trump would renege on his promises of change and carry on with business as usual. After all, there hadn’t been a president since John F. Kennedy to challenge the authority of shadow government. The “deep state” has a way of subjugating those with even the best intentions.

However, by now it’s abundantly clear that Trump plans to push through changes that will have a profound effect on economic growth. It’s not just a case of tweaking a policy here or amending a policy there; major changes in trade, defense, and foreign policy directives are coming, and markets hate uncertainty.

The biggest risk, as explained above, is the implementation of a 35% tariff on imported goods. But what about the threat of war? As threatened, the United States pulling away from NATO or confronting China in the South China Sea would have deep negative ramifications on global trade, regardless of whether tariffs were actually implemented.

Will the U.S. economy collapse in 2017? That question is not as crazy as it sounds.

The largest debt-fueled, multi-asset, multi-country liquidity bubble the world has ever witnessed needs to be addressed one way or another. While it’s possible that the long-term policy initiatives to boost manufacturing and jobs could help the economy down the road–once excesses have cleared and debt loads have at least stabilized–a painful adjustment period is surely in the works. We can only speculate at this point how severe it will be.

You can throw out all the graphs, figures, and statistics reinforcing any analyst forecast at this juncture, because the ultimate black swan is at 1600 Pennsylvania Avenue: Donald J. Trump.