With the swearing-in of America’s 45th president almost at hand, I’d like to congratulate the President-elect and submit seven Donald Trump predictions I feel will define his candidacy.

Before doing so, I’d like to preface by saying that Trump’s presidential run was, by far, the most impressive political victory I’ve witnessed in my lifetime. It wasn’t simply an unlikely electoral victory, which is rare but does happen from time-to-time (Brexit springs to mind). Rather, it was a testament of endurance, perseverance, and strength. It was about single-handedly overcoming the great liberal media machine, which was spewing falsehoods, fake news, and vitriol 24/7. It was about winning heart and minds, even if doing so within party ranks seemed elusive. It was about ushering indecisive change on November 9, rather than January 21.

Whatever you think about Donald Trump, one reality became obvious: few people could have withstood the blistering and maintained the stamina and dedication needed to cross the finish line. Whether you’re on the left or the right, Trump at least deserves this modicum of respect.

Without further ado, here are seven Trump predictions for 2017 and beyond.

1. Whether Trump Governs Well or Poorly, the Left Will Always Hate Him

The divide is too great at this point, and divisions too ingrained. The left’s opinions of Trump range from “He’s the next Hitler/Mussolini,” to “He’s a racist/fascist/nationalist bigot.” With sentiments so entrenched, this truth became self-evident long ago.

The left is also remarkably organized and well-funded. On a grassroots level, they have the ability to galvanize various groups (unions, socialist-marxists, and feminists, for example) to arrange a constant stream of resistance. There’s no shortage of groups—such as George Soros’ Open Society Foundations—willing to fund these groups to achieve a specific goal of dissolving international borders. Nationalism is, and forever will be, anathema to the left.

Thus, the first of my Trump predictions is that Donald Trump will forever persist as the left’s kryptonite, regardless of any good he brings to America.

2. Obama Will Remain a Persistent Thorn in Trump’s Side

You get the picture.

While Obama put on a brave face during his first meeting with Trump at the Oval Office, don’t expect this to last. He’s been a globalist ideologue his entire time in office, and will no doubt have the backing of very powerful elites to “right the wrong” they feel the American populace has committed. Look for Obama to chip away at Trump’s nationalist policy strategies, with help from his powerful globalist cohorts and media allies.

Don’t be surprised if this resistance takes place at a globalist think-tank consultant or as a public company executive (such as a Silicon Valley technology company).

3. The Wall Will Get Built

This is one of the most likely Trump predictions that will come to pass. As a core promise of his “America First” platform, the optics are too damning for this initiative to fall through.

Stemming the flow of migrants also hits on some key objectives highlighted by Trump himself: bringing back jobs to “American” workers, stopping the flow of drugs pouring across the border, and stopping potential terrorists crossing among those simply seeking a better life. All three objectives depend on the fortification of the southern border­­—period.

Lastly, Trump has been a builder his whole life—it’s what he does. In conjunction with his follow-through on other campaign promises, such as bringing back jobs pre-inauguration, there’s little reason to believe he won’t follow-through on building a wall.

What remains to be seen is whether Mexico pays for it.

4. Trump Will Not Get Impeached

With the vitriol surrounding Trump refusing to die down post-election, it’s perhaps unsurprising some are questioning whether Trump can last a full four years.

In fact, some are betting on it.

Recently, well-known betting houses have started a book, offering even odds that president Trump will leave office via impeachment or resignation by the end of his first term. (Source: “Trump Impeachment Now Even Odds At Bookies,” Zero Hedge, January 11, 2017.)

These odds appear quite favorable, considering Trump made it where he is today despite the establishment media constantly lobbying against him. Do you think these voices will continue to get louder, or moderate somewhat? That depends on what happens, but unlike before as a private citizen, Trump now has the ability to destroy the industries, careers, and policies of those who stand in his way. The smart bet is that the media elite, owned by big business, will eventually come around to Trumpian politics, not the other way around.

If you’re a retiree or a longer-term investor, allocating a small portion of funds in this manner might be a boon to your long-term investment portfolio.

5. Trump Will Re-Align NATO in a Significant Way

It’s clear that Trump does not like the North Atlantic Treaty Organization (NATO) as currently constructed. He’s on record questioning the outsized spending burden America carries to keep it afloat, as well as the antiquated nature of the agreement. “It’s obsolete, first because it was designed many, many years ago.” (Source: “Trump Was Right: Top NATO General Concedes Alliance Is “Obsolete”,” Zero Hedge, January 18, 2017.)

As a real estate developer with extensive expertise in keeping costs under control, Trump should be taken seriously when he demands other members pay their fair share. As a developer, it’s in his DNA. It’s also in NATO’s official guidelines, which state all member states should spend two percent of their GDP on defense.

Trump also seems keen on re-arranging NATO from an organization focused on the antiquated communist (Russia) threat, to one focusing on a new generation of Islamic fundamentalism. In fact, the highest-ranking French general in NATO, Denis Mercier, seemingly agrees: “NATO has failed to look at the change in the strategic background,” Mercier told a small group of reporters at NATO headquarters. And now, “We have some structures that are obsolete.” (Source: “NATO General (Kind of) Agress With Trump – Parts of the Alliance Are Broken (Sort of),” ForeignPolicy, January 17, 2017.)

This is one of my top Trump predictions. Count on NATO re-alignment being a top foreign policy priority early on in the administration. 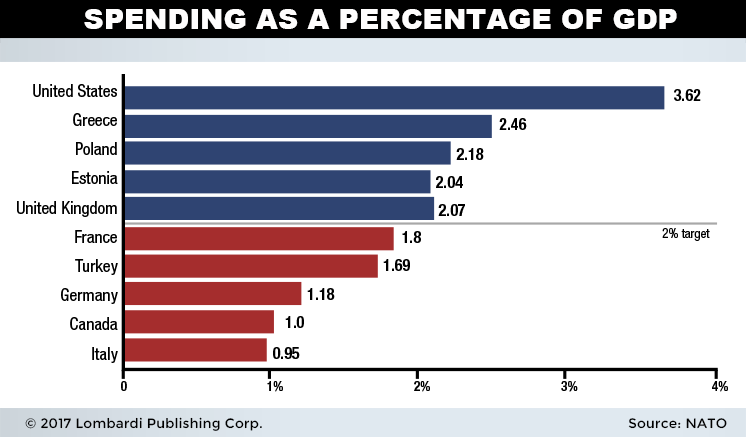 6. The USA Will Lead a New Visegrád, With Russia as Co-Partner

Related to the above Trump prediction, I believe Trump will ally with Russia and the Visegrád Group (Czech Republic, Hungary, Poland and Slovakia) to form a sort of “Classical Alliance” beset with traditional societal values. This will be designed to counter progressive liberal policies that have largely dominated Western politics since the 1970s. Limiting mass immigration from the Middle East and Africa is another a main objective.

This will put America directly at odds with the EU, so expect a tectonic shifts in America’s traditional political alliances going forward.

7. Jobs Will Come Back, But Job Growth Won’t Be Historic

Donald Trump has already had a huge effect in this regard.

He convinced Carrier to keep producing air conditioners in Indiana, saving 900 jobs. He’s convinced several multinational companies to bring back production to the U.S., wielding the big stick of import taxes to those who resisted. It’s undeniably clear Trump intends to follow through on his words to bring jobs back.

While he will be successful on this front, the total number of jobs created won’t rise to historic levels. This has more to do with the changing nature of job creation in an upcoming “Industrial 4.0” labor environment and declining benefits of globalization. After all, why continue employing 1,000 factory workers in China when you can produce more goods in a state-of-the-art facility in America with 100 workers? In other words, as the overall cost of labor declines, so does the incentive to produce goods abroad and import them back to wealthy nations. Doubly so when threats of import taxes are dangled.

So yes, the multinationals will come back, but they are not the job creators they once were.

Time will dictate how many of these Trump predictions come to pass. But the winds of change are blowing, and it’s guaranteed the world political order will look much different by the end of Trump’s first term. Pass the popcorn.