Uranium prices got hammered between 2007 and the start of 2017, tumbling 83% to around $22.50 per pound, the lowest levels since 2005. Uranium prices, and by extension uranium stocks, were hit by a lack of discretionary buying from utilities and an oversupplied market. This oversupply was exacerbated by the 2011 Fukushima nuclear disaster and the continued shutdown of Japanese reactors.

But the outlook for uranium prices looks encouraging. There are 439 nuclear reactors operating in 30 countries, with 66 under construction and many more nuclear energy deals in the works. This bodes well for uranium stocks and uranium mining companies in 2017. Below is a list of the best uranium mining stocks on the NYSE, TSX, TSX Venture Exchange, and ASX.

Not even in the immediate aftermath of Fukushima did the average weekly spot price for uranium dip below $28.00 per pound. Between 2011 and 2013 though, uranium prices experienced three consecutive years of double-digit losses. 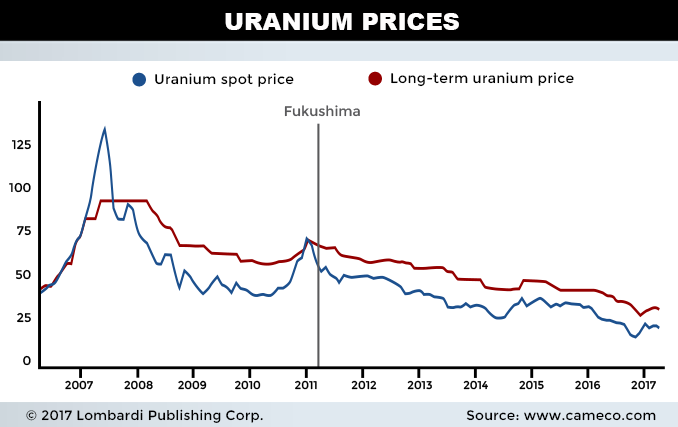 Uranium mining companies followed the same trajectory. Down. The Global X Funds (NYSEARCA:URA) exchange-traded fund (ETF) debuted in November 2010 at $87.18, and aside from a little bump in the first few weeks, URA trended lower, closing out 2016 at $12.87. That represents a six-year decline of more than 85%.

But, like uranium prices, uranium stocks rallied at the end of 2016. Why? Uranium prices and uranium mining stocks went a little nuclear after Donald Trump won the U.S. election. Uranium prices increased 25% in the five months following the election. Over the same time frame, the Global X Uranium ETF advanced 20%.

At these bargain-basement levels, which have not been seen since 2005, only the biggest, most cost-effective producers can survive. A rebound in uranium prices should help the share prices in the top uranium mining companies rebound.

The glow has returned to uranium stocks since Trump won the election because investors believe the Trump presidency will be good for the nuclear power industry. Admittedly, Trump hasn’t said much publicly about uranium and nuclear energy. But he did tweet about it in December.

It’s a stretch to be sure, but in the days following the Fukushima nuclear disaster, Trump said on Fox News said he was still, “very strongly in favor of nuclear energy.” And, that, “if a plan goes down people keep flying. If you get into an auto crash people keep driving.” (Source: “Trump: ‘We Do Need Nuclear Energy,’” Fox News, March 15, 2011.)

Around the same time, it was reported that Trump’s advisors were looking at ways to keep nuclear power alive in the face of cheaper natural gas and renewable resources. Trump’s transition team asked the Energy Department how they could keep the country’s nuclear reactors “operating as part of the nation’s infrastructure.” They also wanted to know what they could do to prevent any nuclear plants from closing. (Source: “Trump Team’s Asking for Ways to Keep Nuclear Power Alive,” Bloomberg, December 8, 2016.)

The communication with the Energy Department illustrates Trump’s potential plans for helping the country’s nuclear power industry, which was hindered under the Obama administration.

It seems Trump’s nuclear ambitions are one of the few areas where he is working with environmentalists. Five nuclear power plants have closed since 2011 and more are slated to be closed down as cheaper forms of power from gas power plants, wind, and solar come online.

According to the World Nuclear Association, there are 439 nuclear reactors in operation in 20 counties, supplying over 11% of the world’s electrical needs without carbon dioxide emissions.

16 countries rely on nuclear power for at least 25% of their electricity. France’s 58 nuclear reactors generate around 75% of the country’s power, while Belgium, the Czech Republic, Finland, Hungary, Slovakia, Sweden, Switzerland, Slovenia, and Ukraine get 33% or more of their power from uranium. (Source: “Nuclear Power in the World Today,” World Nuclear Association, January 2017.)

In addition to being used to generate electricity and for use in weapons, nuclear power (radioisotopes) are used in medicine, the preservation of food, the growing of crops, and breeding livestock. Radioisotopes are also used industrially and in mining. 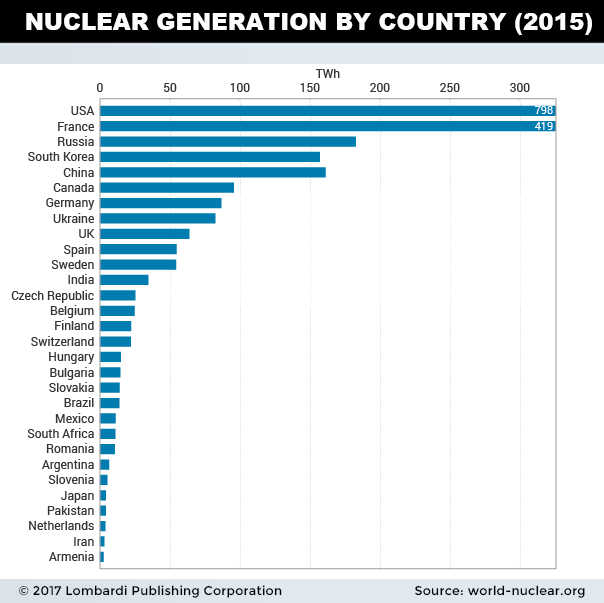 Who Mines for Uranium?

Uranium is widespread and found in many different kind of rocks and even seawater. Like other metals though, it is not often found in high concentrations. When it is, you will hear uranium defined as an orebody. Uranium deposits are calculated as tonnes recoverable.

In addition to the four countries with the biggest deposits of uranium, there are a number of other countries with significant uranium deposits of two percent or more of the world’s total. They are, in order: South Africa, Niger, Brazil, China, Namibia, Mongolia, Uzbekistan, and Ukraine.

The biggest producer of uranium is Kazakhstan, followed by Canada and Australia. For the record, uranium does not trade on the open market like other commodities. Trades are negotiated privately with prices published by independent market consultants.

Moreover, uranium is only sold to countries that have signed the Nuclear Non-Proliferation Treaty. And international inspectors verify that the uranium is only used for peaceful purposes.

Near-term demand for uranium was dented by the Fukushima nuclear disaster, but the medium- and long-term outlook for uranium prices remains strong thanks to a steady stream of refurbishment projects and new build announcements.

At the last count, 66 nuclear reactors are under construction with the biggest areas of growth being China, Russia, India, the U.S., South Korea, and the U.A.E.

China is moving ahead with its ambitious nuclear plans. The China Nuclear Energy Association said it had 20 nuclear reactors under construction at the end of March 2017, with a total capacity of 23.11 gigawatts. One gigawatt can power roughly 725,000 homes.

China currently has 36 nuclear reactors in operation with a total capacity of 34.72 gigawatts. When the new plants come online in 2020, the country will almost double its nuclear power. China also wants to have another 30 gigawatts of nuclear reactors under construction by the end of 2020. (Source: “Uranium Prices: China Confirms Rapid Nuclear Power Expansion Underway,” Economic Calendar, May 1, 2017.)

Because of the increased number of nuclear reactors coming online and the decrease in production, global demand for uranium is expected to rise by 40% by 2025 and 81% by 2035. By 2021, a uranium supply deficit is expected to emerge. (Source: “Uranium Market Trends,” Nicolae Titulescu University, last accessed May 2, 2017.)

These shortfalls will begin to have a positive impact on uranium prices in 2017. That’s because utility companies tend to secure their supply contracts three to four years prior to use.

Uranium miners have had a tough go at it over the last five years to 10 years. But the long-term outlook remains solid with a uranium bull market poised to begin in earnest in 2017.

Fortunately for investors interested in the top uranium stocks, this has not yet reached Wall Street. As a result, the best uranium stocks in 2017 are still under pressure. One of the largest uranium producers in the world is Cameco Corp (TSE:CCO, NYSE:CCJ). With a market cap of $5.44 billion, Cameco Corp provides about 17% of the world’s uranium production from mines in Canada, the U.S., and Kazakhstan. The company has 415 million pounds of proven and probable reserves. (Source: “About,” Cameco Corp, last accessed May 2, 2017.)

In addition to the established top uranium-producing companies, there are a number of smaller uranium stocks that are in the process of developing mines to meet future demand.

Denison Mines Corp (TSE:DML) is a uranium exploration and development company with interests in numerous projects in Canada. Nexgen Energy Ltd (TSE:NXE) is a well-funded exploration and development stock with a portfolio that includes one of the largest uranium projects in Canada. Both of these uranium stocks represent long-term growth opportunities when their mines come online, and are two of the better small-cap uranium mining companies to consider doing due diligence on.