The Undeniable Data Which Indicates U.S. Economic Collapse on Hand

Yet again, additional data is confirming what much of Main Street already knows is at hand. It may be gradual, and it may be occurring by stealth, but its unmistakable hallmarks keep popping up in undeniable ways. If you are still entwined in the matrix of false prosperity, this may be a good time to reconsider. After all, it will take a clear head and some easy-to-muster preparation to survive the possible U.S. economic collapse that lies ahead.

The latest evidence comes from the May 2017 U.S. economic jobs data, which was, well, awful. Expectations missed by 47,000 jobs created and, even then, most of the new jobs were low-paying or transient-type positions. Full-time jobs fell the most they have in three years, despite a population increase of several million people during this period. (Source: “May Jobs Report: 138,000 More On Payrolls; Unemployment Dips Slightly,” NPR, June 2, 2017.)

While we usually take poor individual data sets in stride, the totality of evidence is becoming obvious: risks of economic crisis are growing. This recent report is merely the confirmation of much larger immutable negative trends that haven’t been reconciled since the previous crisis.

For example, around 93% of all net new jobs created since 2008 (6.7 million) have been statistical, owing to something called the Bureau of Labor Statistics (BLS) Birth/Death model. This model is defined as the net number of new jobs arising from new businesses (birth) minus business closings (death). The problem with this method of calculating employment is that it estimates the number of jobs created based on some Excel formula, rather than calculating actual jobs created. In essence, the BLS is giving its best guess, but that’s all it is…a guess. Nothing is rooted in fact. Nor can we definitively rule out that such statistics aren’t politically biased.(Source: “The US Jobs Market Is Much Worse Than The Official Data Suggest: The Full Story,” Zero Hedge, June 4, 2017.)

A recent Harvard-Princeton research paper shows that 94% of jobs created in the current business cycle were temporary positions. Meanwhile, the number of temporary, contract, or part-time workers rose by more than 50% in the 2005–2015 period, from 10.1% to 15.8% of the workforce. (Source: Ibid.)

The trends are self-explanatory and likely permanent. Widespread economic insecurity is now a fact of life for the majority of American workers. Part-time work used to be consigned to seasonal, retail, food, services, and construction. It has now spread to almost every sector looking to cut costs and compete for consumers, who are deeply price-sensitive.

Also concerning is that the increased amount of part-time employment has probably led to double- and triple-counting in the jobs data, leading to a significant overestimation of the strength of the economy. The reality is different under the surface.

Should events unfold this way, this suggests that a damaging recession could soon make the rounds. Or at least some notable economists think so.

Gluskin Sheff + Associates Inc (TSE:GS) Chief Economist David Rosenberg believes this scenario is likely. He’s forecasting a recession sometime next year, as the Federal Reserve is expected to keep raising interest rates. Why? Because 10 of the last 13 Fed tightening cycles have ended in a recession. (Source: “David Rosenberg: “We Probably Will Have A Recession Next Year”,” Zero Hedge, May 25, 2017.)

Should this occur, it could be a watershed moment for broad markets trading at their highest valuations in history. So much is priced into a market rising almost exclusively on the hopes of rising earnings.

Yes, there have been two periods in history where the price-to-earnings ratio (P/E) has been higher. The aggregate P/E ratio at the peak of the tech bubble dwarfs anything seen today. But those were concentrated in a handful of sectors (anything related to Internet and biotech in 2000), not the broad market as a whole. Today, everything is expensive, and, without correlations between assets also at an all-time high, if the dike breaks in one sector, it could have a cascading effect on others.

Even if you don’t have exposure to the markets, a recession would have a lasting impact on most American livelihoods. Reduced or negative returns from pension funds would send default rates soaring, wiping out retirement savings for many Americans. The Federal deficit would soar much higher, as tax receipts plummet. The government might engage on yet another round of stimulus spending, further eroding the dollar’s value. All these factors could pressure the cherished U.S. credit rating, which is still investment-grade. If it moves below that level, the U.S. dollar is finished as the world reserve currency. Then the fireworks really begin.

But perhaps the more chilling aspects of Rosenberg’s commentary were saved for the state of the U.S. workforce. They suggest worrisome and permanent structural impediments that are detrimental to ordinary Americans. “What’s happening in terms of artificial, robotic intelligence and the shared economy… Right now, we’re going through the fourth Industrial Revolution, and it’s having a profound impact on worker anxiety.” (Source: Ibid.)

This touches on a subject I’ve been covering for a while now. The robotic revolution is real. Untold millions of people will be displaced or discarded over the next dozens of years, and hardly anyone talks about it. By some accounts, it could be close to four-tenths of the workforce by 2030. The government might find a way to prop up the whole economy, but a U.S. economic collapse would visit many without the ability to earn a paycheck.

Perhaps this trend is manifesting itself in the labor participation rate, which has plunged to 30-year lows. After all, why would so many workers drop out of a workforce with a 4.3% unemployment rate (the lowest since 2001) and soon-to-be second-biggest business expansion ever? Why is there absolutely no traction in wage growth, with average hourly earnings stuck between 1.5%-2.8% over the past five years? Why are 23 million Americans aged 25 to 54 out of the workforce altogether? (Sources: Zero Hedge, May 25 and June 4, 2017, op cit, and “Graphics for Economic News Releases,” Bureau of Labor Statistics, last accessed June 5, 2017.) 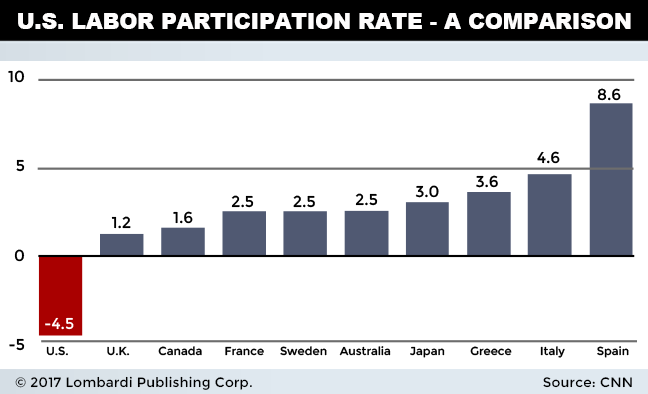 None of it makes sense unless you consider that an increasing percentage of the U.S. workforce can no longer compete with artificially intelligent labor. We tend to view robots incrementally replacing fast-food workers or cashiers as something which happens in isolation. But it’s more than that. It’s a broad-based plan to outsource any linear-thinking or manual-tasking human with increasing complexity. Sadly, most of these workers are not “highly skilled” and hold little hope of improving the situation, much less maintaining it.

I think automation and the shared economy have everything to do with this. Unfortunately, these trends only strengthen exponentially over time, torpedoing anything resembling strong growth in its wake.

Are We Close to an U.S. Economic Collapse?

The signposts point to a resounding “yes.” That’s because, if the U.S. economy can’t grow at a minimum of three percent per year and indefinitely, something must give. Whether that means huge cuts to social security, ballooning deficit spending, or higher taxes, it will end badly for the average American. There’s simply no way for America to keep running up $400.0-billion to $1.0-trillion deficits annually with impunity.

But even if we assume that the dam breaks eventually, we also must assume that the government will throw even more money at the problem to prevent disorder. It did this in the wake of the tech bubble crisis, then went to even greater depths in 2008 with the Troubles Asset Relief Program (TARP). Whether domestic or abroad, every major central bank policy decision since has doubled down on debt expansion (quantitative easing) to quell the slightest hint of unease. There’s absolutely no reason to think it won’t happen again.

So, what does this mean for you? It means that economic collapse preparation is paramount. Throwing a few more trillion dollars at the problem could cause the rating agencies to re-evaluate their U.S. credit rating outlook, which is currently rated “investment-grade.” Any lowering below investment-grade would force a cascade of selling from sovereign and corporate debt-holders, crushing the dollar’s reserve currency status. Consumer goods would get much more expensive for average Americans (inflation), and interest-rate payments would soar.

Or perhaps a deflationary supernova grips the nation, despite a stimulus bazooka unleashed by the Federal Reserve. Perhaps no amount of cheap credit is able to jump-start an economy on the backs of a tapped-out and aging consumer. We know that overly-indebted people don’t spend, and neither do the elderly. This could be a particularly bad combination in this cycle, where pensions and social security cuts are on the chopping block. People worried about their future income stream don’t spend either.

The reality is, no one knows how adversely America will be transformed after the U.S. economic collapse strikes. We can make certain assumptions, but the wheels have fallen off the safeguards that could ensure a quick economic revival. In the end, America’s imminent economic decline is a witch’s brew of unbending demographic realities, too much debt, slowing credit expansion, and popping bubble economics which have greased almost every segment of finance.

Prepare your mind, body, and portfolio for the turbulent waters that lie ahead.