The U.S. dollar has come under heavy pressure lately. The latest economic statistics have failed to impress the Federal Reserve. Fed Chair Janet Yellen has made it clear there won’t be another interest rate hike until at least next January. The Fed wants to see more inflation. Thus, the U.S dollar, which was poised to reach parity with the euro (EURUSD 1:1) is approaching $1.20. Note that in December 2016, the same exchange rate was 1:04. 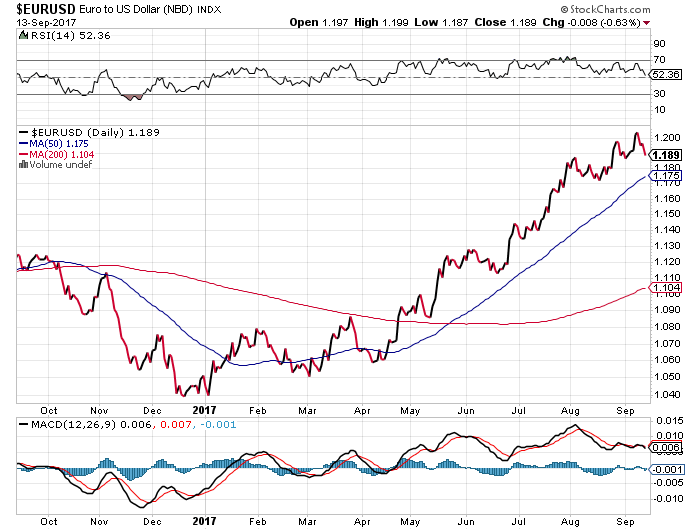 The U.S. dollar might dip some more; it might even post a robust recovery in the mid-term. But it could be a meaningless effort because the world is witnessing an epochal shift. It happens to all powers. Eventually, no matter how mighty or influential, they fade like Rome or Greece and Babylon before it.

It’s unclear who or what will take over from the United States in the next few decades—perhaps as early as 2050. Yet, since history has been recorded, the first signs of global influence tend to be economic. Certainly, economic growth will play a big role. China, which has almost four times the population of the United States, is heading steadfastly towards becoming the world’s biggest economy. That’s a well-known trend.

But China will try to displace the strength and importance of the U.S. dollar in order to achieve this faster. Russia will join it. Indeed, it seems Russia and China have decided to turn their efforts against the might of the dollar.

The United States has put much pressure on Russia lately. Trump’s presidency was supposed to have improved the difficult relationship between Washington and Moscow. But it has not. Diplomatic relations between the U.S. and Russia are at the lowest point since the peak of the Cold War.

Then there’s China. The U.S. opened up to China, starting in 1970 even while the Vietnam War was going on. But Trump has antagonized Beijing, even agreeing to more weapons sales to China’s political rival Taiwan.

The result is that the Trump White House has done nothing to stop Russia and China from forging closer ties. They have big plans. These range from infrastructure to altering world trade, reviving the old Silk Road, linking Europe to China by land as well as by sea. But Beijing and Moscow also want to overturn the existing international economic and financial order. This means in no uncertain terms conducting a war against the dollar.

Russia and China Are Already Starting to Undermine the Dollar

Russia and China are going to exploit the many geopolitical tensions to gradually displace American influence. The dollar’s value was built on America’s dominance after WW2. After the collapse of the Soviet Union, the dollar overcame the final barrier, penetrating all markets. Neither Russia nor China wants to rewrite the book on how to expand monetary power. They will use the same approach as the United States. In other words, they will spread their political influence to fill in the gaps the U.S. is leaving behind.

There are plenty of conflicts to exploit for this purpose. With the U.S. planning to remain bogged down in Afghanistan, there remain many conflicts to be confronted from East Asia to Central Asia, not to mention the Middle East, Africa, and Latin America. Then there are the noted hot spots of North Korea, Syria, Iraq, Afghanistan, Ukraine, Libya, and Venezuela.

But there are other tensions in areas the media has ignored. There’s a terrible war in Yemen, for example. In other words, the U.S. cannot stretch its influence to fix these situations all by itself. Fixing problems by “exporting” democracy doesn’t help. It makes the problems worse. Russia and China are part of the BRICS (Brazil, Russia, India, China, South Africa).

BRICS recently held a summit in Xiamen, China. This emerging bloc feels stronger than ever and wants to start spreading its might. Russia complains that the current and limited number of reserve currencies—led by the dollar—should expand. The dollar accounts for almost two-thirds of the world’s currency reserves. The world prices oil, gold, and other strategic commodities in U.S. dollars.

U.S. Economic Power Relies on the Strength and Demand of Its Dollar

This allows the U.S. to retain a dominant role. It can print dollars whose value comes from its use as a world currency much more than its actual economic strength. More reserve currencies, therefore, would imply that the U.S. would no longer be able to print as many dollars as it wants.

The end of the dollar’s overwhelming power is closer than many realize.  The Chinese yuan has already been approved as an International Monetary Fund (IMF) reserve currency. It has joined the ranks of the euro, the Japanese yen, the pound sterling, and of course the dollar. China wants to start buying oil in yuan, redeemable in gold. (Source: “China Puts Oil on a Gold Standard,” Money Metals Exchanged, September 5, 2017.)

Washington is increasingly concerned about the Russia-Chinese partnership and so should you. As the U.S. remains bogged down in Afghanistan and North Korea, China and Russia are expanding economically in Africa and South America. Sooner or later, many countries could start switching from the dollar to the yuan or another potential BRICS currency. Once the dollar begins its inevitable decline, so too will the influence and economic power of the United States.