The Main Reason Why We Had the Financial Crisis Of 2008

The Reasons for the U.S. Financial Crisis of 2008

The financial crisis of 2008 sparked the worst economic recession since the Great Depression of 1929. At the root of this crisis, which broke out in the United States (just as in 1929), were significant changes in the financial system.

The changes exacerbated the destabilizing effects of several factors. Still, the main reasons for the U.S. financial crisis of 2008 are clear. They include high commodity prices (especially oil), a global food crisis, the threat of a recession in the world, and a credit crisis (followed by a banking crisis).

Because of this financial collapse, investors worldwide simply stopped trusting the stock markets. The effects of the financial crisis of 2008 have produced one of the worst economic crises in history. The recession it produced lingers almost 10 years later. It might even be worse than the Great Depression of the early 20th century.

In hindsight, no 2008 financial crisis summary should begin without an examination of the toxic context in which it occurred. Generally, anyone explaining why we had the financial crisis of 2008 briefly could do worse than to cite “imbalance”—the imbalance between the realm of finance with the real economy or Wall Street with Main Street.

That imbalance persists today. Just consider that in a typical business day, the value generated by stock exchanges multiple tens of times higher than the value generated by the exchange of real goods in a year. In the months that preceded the first crack of the 2008 crisis, almost half of the profits in the U.S. market derived from financial services.

Thus, speculation and “investing on speculation” activities gained an excessive value compared to the actual goods and production. This trend is not new; it was also one of the characteristics of the economy of the 1920s, which ended, as we know, in the crash of 1929.

Those lessons were forgotten during the euphoria of the 1990s under President Bill Clinton, who supervised a major deregulation effort. The United States decided to ease financial regulations to promote economic growth. A freer and more efficient system would abolish the kind of supervision, such as the Glass-Steagall Act, that many believed to be stifling.

That proved a short-sighted move. After all, if this regulatory and supervisory device became law in 1933, there was a reason. The reason was to prevent another Great Depression. However, President Clinton would take an even bigger step. In 1999, he deregulated the financial exchanges through the Gramm-Leach-Bliley Act, a.k.a. the financial services modernization law.

So, What Caused the 2008 Financial Crisis?

If anyone should demand a single explanation for the 2008 financial crisis, few explanations work better than the Gramm-Leach-Bliley Act. That was the law that effectively lifted Glass-Steagall. The repeal allowed the creation of banking groups, which would perform both traditional banking activities, as well as investment banking and insurance.

The goal was the clear separation between commercial banks and investment banks. This would eliminate possible conflicts of interest and avoid financial shocks, linked to speculative activity that could destabilize the real economy.

In other words, Clinton removed the one tool that the economy had to protect Main Street from Wall Street. Here’s why.

In other words, they provide liquidity to the productive sector—or the real economy, if you will. In contrast, investment banks are financial institutions that help corporations raise capital. They also act as brokers or intermediaries in mergers and acquisitions. But increasingly, in the 90s and 2000s, they became conduits for the trading of derivatives and equities.

Contrary to what the name suggests, therefore, investment banks are not really “banks.” They don’t take deposits and, by their nature, face looser regulations. Therefore, they can take greater risks than commercial banks. Since 1933, the Glass-Steagall Act upheld this clear distinction between the two types of banking. Why, you ask?

The separation of banking activity prevented contamination of risk. That is, the commercial banks were effectively banned from taking risks by speculating their customers’ savings on the stock markets. The risk of that, of course, was that they could wipe out those savings, which is what happened in 1929.

More importantly, Glass-Steagall prevented commercial banks from underwriting the purchase of any financial “product” other than government bonds, unless specifically demanded by the customer. Commercial banks could not even affiliate with investment banking firms. The moment a financial institution would start trading of securities, they would have to stop offering deposits.

Rather than strengthening the financial system, deregulation effectively made it more vulnerable to shocks. That shock came in the form of a sudden devaluation of property values in 2006 and 2007. This drop damaged the U.S. financial system in its entirety. This means that many banks, insurance companies, and mortgage brokers collapsed.

In turn, entire business sectors collapsed as well. That’s because many relied on bank loans. But credit dried up after a period of overflow. It wasn’t long before the credit crunch created a domino effect of financial collapse worldwide.

The fact that the financial crisis originated in the United States proved fatal for the rest of the world. As the largest economy in the world, it had repercussions everywhere. Thus, the crisis spread like a virus. Unlike 1929, when the market crash affected mostly the United States and Europe, globalization meant that just about all economies suffered the recession in some form.

Deregulation and the Subprime Mortgage

The 90’s deregulation reserved their biggest effects on the real estate market. Given that a home is typically the largest investment most Americans make, bankers and regulators should have expected the dire results. These would be the major factors that contributed to financial crisis of 2008.

In the 90s, the liberalization of the U.S. financial sector changed the rules of the game faster than they could deregulate. One of the “products” that resulted from this process was a special new type of mortgage. It was almost miraculous, some might say too good to be true: the “subprime mortgage.”

The subprime mortgages were as appealing and dangerous as the finest of siren songs. They allowed just about anyone to experience the pride and security of home ownership. At first, they would lure customers with little to no collateral and seemingly favorable repayment terms.

The catch was in the fine print. The part of contracts most people don’t read actually spelled out the problem of these new financial “products.” Yes, people could buy a home, but at very unfavorable conditions. The subprime mortgages contained clauses that could dramatically inflate interest after just a few years.

In the 1990s and 2000s, many Americans got subprime mortgages. Eventually, they became indebted and many still struggle today. The obvious question is why banks would sell subprime mortgages if they were all but guaranteed to collapse. This is where the mixing of commercial and investment banking comes in with all its destructive might.

The commercial banks sold the unpaid mortgages as financials. They turned them into derivatives–once sold only by investment banks. By doing so, the banks that sold the subprime mortgages essentially got rid of the risk associated with these, unloading it to another bank.

Therefore, when a subprime borrower could not make his payment, the problem would bypass directly to the institution–such as Fannie Mae–that “acquired” the debt. In turn, the Fannie Mae’s of this world sold that debt to other institutions and so on. Some banks turned that toxic debt into financial products through the magic of derivatives. Meanwhile, debt kept piling up. 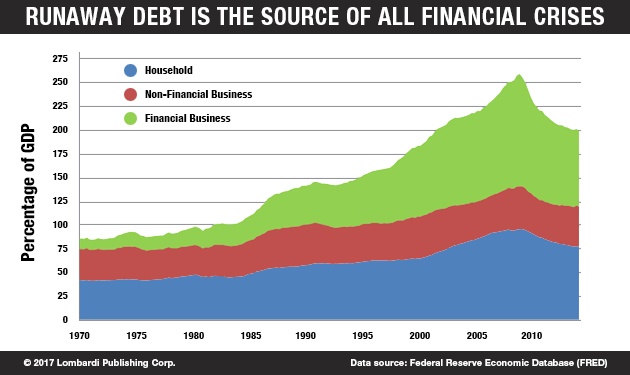 The Financial Crisis 2008: Causes and Effects

They placed these debt-loaded derivatives on the market with a fancy name that oozed of financial savvy: “mortgage-backed security” or MBS. In other words, the toxic mortgages were packaged as a regular financial product that actual investors would buy and sell on the market as easily as General Motors stock.

The buyers of these so-called “securities” include banks, pension funds, and insurance companies. Many private investors joined in the fun as well. The irony was that for a while, until someone decided to consider what was “backing” the MBS (toxic debt), trading MBS even generated profits. They kept increasing in value, and the banks were only too happy to unload their risk.

Eventually the house of cards collapsed, bringing the markets down with it. By 2007, the number of subprime mortgage defaulters became too large to contain. The cracks in the system started to show, as many home “owners” were forced to sell their properties to the banks at below market prices. This forced a real estate crash as housing prices collapsed. In turn, many Americans suspected, rightly, something was rotten in the state of Wall Street, taking a sudden bearish turn on the markets.

Meanwhile, banks sharply curtailed lending, forcing many companies to have to slow production. That process sparked a massive recession amid layoffs and reduced consumption. Such was how what started out as a purely financial product the now infamous MBS ended up destroying the real economy.

The financial crisis in the deregulated and globalized markets immediately spread, becoming a worldwide phenomenon. Wall Street is the world’s biggest stock market. Thus, many enterprises, households, and even governments around the world who held investments in the U.S. stock market suffered heavy losses.

Multinational banks sold off many activities to compensate creditors and customers. That alone proved the dangers of mixing commercial with investment banking. These same banks also sold off shares just like in 1929, provoking a financial avalanche like never. Another effect was a major collapse of world trade.

The United States had been the world’s largest importer. But the drop of demand was such that by 2009, after the September 15, 2008 crash that marked the peak of the crisis, world trade had dwindled. Never was a financial crisis so deep and so global. The lessons have not been learned.