On March 1, the Dow Jones hit a new high of 21,000. Not two months ago, “Dow 20,000” was the epitome of Wall Street optimism. But does this accelerated pace truly reflect a healthy economy? U.S. Fed Chair Janet Yellen will put the recovery to the test with increased Fed interest rates. That could either prove the bulls or prompt U.S. financial collapse 2017.

The very notion of a U.S. financial crisis 2017, might seem outlandish, but it’s no more (if not less) bizarre a scenario than the current stock market performance. The bull market continues to stampede over skeptics. President Trump’s promised fiscal policies are supposed to accelerate growth.

But Trump’s growth, should it actually materialize, brings inflation with it. This is what is prompting Fed Chair Yellen to take pre-emptive measures. Simply put, increasing the U.S. debt is not sustainable in the long term. Yet Trump’s tax cuts, as welcome as they are to supporters and detractors, could send inflation and spending spree in overdrive.

U.S. rate predictions at this point are no longer mere guesses. One might consider them to be fact at this point. Thus, unless there is an economic surprise, rates will go up by another 25 points. The direct and immediate result is that this will widen the gap between the U.S. dollar and other major currencies like the euro.

That will inevitably render U.S. goods less competitive in international markets. But the main risk is that nobody can predict what will happen. Interest rates have hovered at barely above zero for almost a decade.

After such a deep recession, there are more questions than answers about how suddenly-rising Fed interest rates might affect the economy. One of the issues is so evident that nobody has even considered it. Zero interest rates have been unusual. By raising them, even gradually and by fractions of a point at a time, Yellen is merely bringing them back toward normal.

To grasp the scope of this change, consider a hypothetical scenario of having lived a decade on tax-free income. Suddenly, you discover that you have to pay income taxes and other government-mandated services. Even at a nominal rate of 10 percent (which is unheard of in the real world), most people would find such a transition highly traumatic.

U.S. Would Be First to Raise Interest Rates: A Major Risk

The fact that the U.S. would be the first major Organisation for Economic Co-operation and Development (OECD) economy to lift interest rates adds additional hazards. The European Union (EU) and the Japanese government have pushed their rates to negative levels. Interest rates remain below zero. Meanwhile, there are few prospects of a hike, given the inability of many economies to grow.

The world simply has no precedent to serve as an example or to offer guidance as to what to do when the money stops flowing freely, as it were. Some economists might remind us that, in 1937, the Federal Reserve overestimated the strength of the recovery that followed the Great Depression. It acted to stop the expected inflation. (Source: “Recession of 1937–38, Federal Reserve History, last accessed March 6, 2017.)

But it acted too quickly, causing the American economy to fall back into the depression hole. It took World War II and the related military buildup to finally lead the U.S. out of economic depression. The present scenario is eerily similar. It’s true that the U.S. economy appears to be performing better than most of its peers.

But the interest rate hike and the higher cost of borrowing have to confront a difficult obstacle. As enviable an economy America has experienced (at least on paper and using gross domestic product (GDP) numbers), lately there have been troubling indicators. For unclear reasons, salaries in the U.S. remain low; in fact, they are stagnant.

The official unemployment rate has fallen to below five percent, but wages have not moved. Economics seem to work in highly arbitrary ways these days. If more people are employed, the value of labor for talent-seekers should be higher. That’s because the more people who are employed, the harder it should be to find available workers.

But nothing of the sort has happened. Thus, the real inflation rate might be much lower than what the official statistics are suggesting. Thus, there is the risk that Janet Yellen may be raising rates based on a faulty scenario. Labor cost trends should be considered a more reliable indicator than official inflation.

It is only when wages show a substantial increase that central bankers should start making assumptions about inflation. Miscalculations in this area could spark a sudden rise of unemployment. Conversely, a miscalculation of inflation could spark a stock market correction or even a financial collapse.

As for the latter, that could happen even before the realization of a mistake in the reading of inflation. The expansionary monetary policy (fancy talk for cheap money) has fueled an asset bubble. There has been widespread overvaluation, especially in the last few months. This has forced the Fed to ponder rate hikes.

The Fed, just as most other private or government institutions, have no real understanding of the phenomena at play. They have therefore scrambled to find a way out. Raising interest rates is the most unoriginal—but also the most tested—method of regaining control of the economy. But, to give Janet Yellen some credit, by delaying action on interest rates further, economic risk only exacerbates.

It’s the Federal Reserve’s job to prevent economic overheating. International convention suggests that the optimal rate of inflation should be just about two percent. Such a rate both shows real economic growth and a healthy level of borrowing costs. When, as in the past decade, inflation is lower, it points to a major weakness in the system.

By raising rates, the Fed is implicitly suggesting that it has found the flaw. Thus, the Fed can resume normal operations. But the Fed has not found the flaw. That’s why the risk of a financial crisis 2017 is so high. Now, as to when that crisis might materialize, there is no clear answer, but its signs have already been knocking at the door, and you should not ignore them.

There is palpable fragility in the global macroeconomic system. Meanwhile, the latter is under attack from a series of potentially dangerous scenarios. One of the biggest of these is the unavoidable collapse of global trade. That is not an accident; the current White House is acting to achieve this very goal, despite the fact that Trump hopes to increase American exports.

The chart below illustrates the direction of world trade over the next few years. Clearly, trade has not recovered from pre-2007/2008 financial crisis levels. China’s exports, which reflect the health of global demand, have dropped 10 percent compared to 2015. Indeed, Chinese exports have dropped every month since 2015. 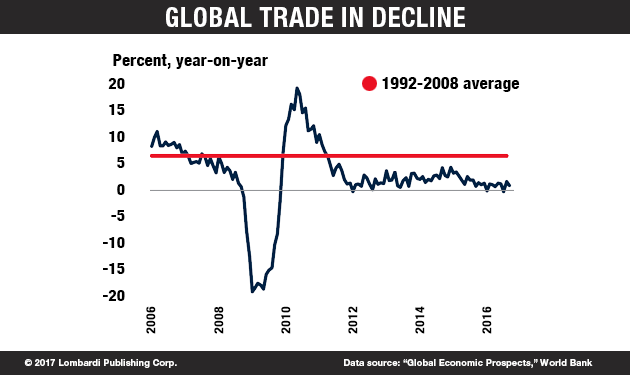 Meanwhile, China has shown a slowdown in its own demand. That measures the potential of other exporting countries such as the United States. Those statistics are matched by a corresponding decline in the value and volume of global maritime trade. In 2016, about 90.0% of major maritime transport companies, such as Maersk, for instance, have reported heavy losses.

As it happens, Hanjin Shipping went bankrupt. If the world’s top economies were really growing, one would expect trade and shipping demand to increase. Instead, there has been a shipping glut.

Most of those powers are in Europe, and they use the euro. In 2017, the euro will have to withstand at least three elections that threaten its future. The Dutch elections in mid-March are the first real test. Then France goes to vote in the first round of the presidential elections in April. Then it’s Germany’s turn. Possibly, Italy will have a vote as well.

The polls show a growing anti-euro sentiment. Each of these elections could send a blow across the Atlantic. The S&P 500 index, which has been soaring, could suddenly reverse course. Such is the context against which Janet Yellen is raising interest rates.

Over the past seven years, the S&P 500 index has seen almost exponential growth. It has gained over 250% thanks, in large part, to the soft Fed policy. If the Janet Yellen rate hikes should interrupt this course, the results could be apocalyptic.