When most people think of the stock market crash 1929 causes, they think of the Great Depression. But, in fact, it’s more a case of the tail wagging the dog. Factors, both organic and outside the system, led to cascading events which would see the Dow Jones Industrial Average (DJIA) fall almost 90% peak-to-trough by 1932. The events also provide valuable lessons and similar parallels to what we see today.

The Roaring Twenties were a time of great decadence and profound change in American society. Game-changing technologies like the automobile, motion pictures, and the household radio brought a sense of modernity to an otherwise traditional society. The economy was booming and a sense of prosperity had taken hold. American culture liberalized to a large extent: jazz music was founded, speakeasies flourished, art deco peaked, and society became more cosmopolitan. A surging standard of living fostered an “anything is possible” confidence throughout society.

Unfortunately, stock market investors believed too much that anything was possible. Little did people imagine how their exuberance would lead to the devastating stock market crash 1929 effects.

In actuality, the market in the Roaring Twenties started out with a whimper, rather than a bang. The DJIA finished its first month of 1920 at 104, and proceeded to lose about a third of its value over the next year and a half. Reverberations from World War I were still being felt, with labor turmoil affecting the domestic economy. A short—but sharp—recession took hold, briefly spiking unemployment to 11%.

Things turned around quickly in 1922, and the economy began an epic expansionary phase which would culminate in stock market crash 1929 effects which would shake the foundations of American society. The stock market crash 1929 president, Herbert Hoover, deserves some credit for this rebound. Hoover gathered 300 eminent members of American industry in September 1921 to discuss the double-digit unemployment problem. Hoover ultimately organized a committee on unemployment which relieved the issue, and he oversaw lower tax rates, which boosted the recovery.

The stock market crash 1929 summary is really one of debt gorging by “Joe Public.” It was the first time stocks could be purchased on margin, using only 10%-20% purchase value and borrowing the rest from the brokerage. This brought many people into the market that otherwise would have stayed away. The DJIA exploded higher, from 67 in August 1921 to 380 in August 1929, which was a 467% increase. Even the shoe shine boys were getting in on the action, even if they provided lousy advice.

And the brokerage houses were more than happy to let this raging inferno burn. They had access to the order book, decades before electronic networks were invented. This gave them a huge time advantage to place orders, and a virtual license to front-run their clients. There was no Securities And Exchange Commission (SEC) to look out for investors or to enforce insider-trading rules.

Simultaneous to margin buying, a credit boom of gargantuan proportions swept the nation. There was a rapid growth in bank credit and loans in the U.S. as bank loans became more readily available. Encouraged by the strength of the economy, investors started borrowing and investing in the market that they felt was a one-way bet. Because people became highly indebted, it meant they became more susceptible to a change in confidence, and so did the market by association. When that change of confidence came in 1929, anxious investors rushed to sell shares and redeem their debts.

The stock market crash 1929 facts also include irrational exuberance, obviously. Near the peak, investors experienced the classic speculative bubble in which they believed nothing could go wrong. Many investors leveraged up extensively, believing they would triple or quadruple rapidly. We’ve seen this movie before, only in 1929 it was subtitled in black and white.

Cause and Effects of Stock Market Crash 1929

We’ve explored some of the individual causes of that led to an expansion of share purchasing, but what was the spark that collapsed the house of cards? Mainly, it was structural deficiencies in the economy that became to big to hide. Once economic fundamentals started to sour, leveraged-up investors and brokerage houses rushed through a small selling window all at once.

Overcapacity became glaringly obvious as the economic expansion wore on. Advances in production techniques—including the assembly line born in 1913 from Ford Motor Company (NYSE:F) and exported to other industries—led to overproduction of many goods. This, in turn, strained profits and expectations of such.

Many economists believe that banking system decentralization played a large role in the problem. At the time, America had over 30,000 banks and savings & loan companies strewn throughout the country, and many were prone to bankruptcy and runs on deposits. In particular, many banks in rural areas went bankrupt due to the agricultural recession. This had a negative impact on the rest of the financial industry. Between 1923 and 1930, 5,000 banks had collapsed.

Once the depression commenced, the Smoot-Hawley Tariff Act of 1930 exacerbated the depression greatly. The act, originally designed to protect U.S. farmers, turned into something far greater as it passed through Congress. By the time it was signed into law, 890 tariffs were imposed against imports, touching practically every industry. Other nations retaliated, and trade plummeted. U.S. imports dropped 41.2% between the second quarter of 1930 and the third quarter of 1932, and Gross National Product (GNP) fell a whopping 29.8% during the same period. (Source: “The Smoot-Hawley Tariff: A Quantitative Assessment,” Dartmouth College, Last accessed April 18, 2017.)

The stock market crash 1929 effects could first be seen on margin accounts. As the market rolled over, the most leveraged investors were forced out first. This had a compounding effect on prices, with each wave of selling bringing about more margin selling. Sellers simply overwhelmed the buyers, and the bidless market careened lower.

While the crisis only directly affected the tiny minority of investors and affluent Americans who owned stock certificates, ensuing cutbacks in industrial production caused a nationwide economic downturn unprecedented in its depth and length. The gravy train had ground to a halt.

The stock market crash 1929 timeline began on Black Thursday 1929. This is a day that lives in infamy. It was the first day in a wave of panic selling which saw the DJIA lose over 30% by the middle of the following week. The New York Stock Exchange (NYSE) opened almost five percent lower, foreshadowing the calamity to come. The New York Times and The Washington Post blared dramatic headlines of impending doom from the panic selling, which was seeping in at the fringes.

On Thursday, October 24, 1929, the market opened at 305.85 and proceeded to drop another 11% intraday. The three biggest banks of the day—Chase National Bank, Morgan Bank, and National City Bank of New York—announced they would be buying shares, in an effort to reassure the market. It worked, but the relief was temporary. The DJIA recovered to only finish down two percent, but volume was extremely heavy, at 12.9 million shares. A palpable sense of unease remained. 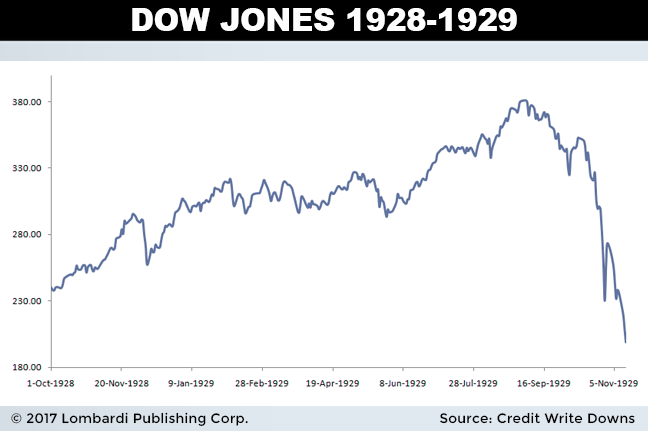 The next day—Friday, October 25, 1929—the market finished up two points and investors limped into the weekend hoping that the panic selling was behind them. Unfortunately for them, it was not.

Over the weekend, the extreme events in the market continued to generate front-page headlines. This scared many investors into placing “sell” market orders for Monday, October 28. The margin calls triggered from the week before had still not been cleared. Thus, “Black Monday”was born and the slide continued, with a record loss of 38.33 points in the DJIA, or 13%, by the Monday close.

But the bloodbath was not over.

The next day, “Black Tuesday,” 16 million shares traded hands as the panic reached a crescendo, a record which would stand for nearly 40 years. Many portions of the market had gone completely bidless, with literally no market for some stocks at any price. The DJIA lost an additional 30 points, or 12%, meaning the index lost a quarter of its value in just two days, wiping out $30.0 billion in market capitalization. Investors were crushed, and they continued to shun stocks for a long time thereafter. The DJIA continued on a steady pace downward for three more years before it stabilized somewhat.

What happened after the stock market crash of 1929? Many regulatory changes took place, changing the face of the financial industry in America forever. In 1933, the Banking Act of 1933 was formed, partially in response to the great stock market crash 1929. The act limited commercial bank security activities and limited affiliations between commercial banks and securities firms. It also facilitated the creation of the Federal Deposit Insurance Corporation (FDIC), an organization which might have helped individuals if formed prior to 1929.

The Securities Act of 1933 and the subsequent Securities Exchange Act of 1934 (which created the SEC) was formed in an effort to restore confidence in the markets. A slew of publicly-traded companies were now subject to investment disclosure and were required to provide full transparency on their business operations. Brokers, dealers and exchanges were now required by law to put investor interests first, and treat them in an honest and trustworthy manner. The SEC was mandated by the full backing of U.S. Congress to enforce these newfound laws for the protection of investors and integrity of the markets. A new era was born.

While these important regulations have not stopped subsequent stock market crashes from occurring, including Black Monday 1987, they undoubtedly have had a positive impact on the transparency of markets. The next stock market crash may be around the corner, and an economic collapse may be imminent, but it’s likely we will never experience the panic selling to the extent that it existed in October 1929.