The U.S. economy is facing a number of economic headwinds that, when looked at individually, may not be all that earth-shattering. When looked at collectively though, the economic data shows storm clouds over the U.S. economy are getting darker. While stocks continue to trade near record levels, they appear to be stalling.

For the stock market to move higher, investors will need to see that President Trump’s pro-growth, pro-business economic policies are first, going to get passed, and second, translate into higher earnings. This isn’t happening.

Nearly 100 days into the Trump presidency and the most recent economic data shows the U.S. economy is slowing. Moreover, it seems less and less likely that Trump will be able to get is economic policies passed in a timely manner.

The Trump Bump is over and investors want to see results. Unfortunately, the most recent economic data is not what investors were hoping for. Instead of surprising to the upside, the economic data continues to surprise to the downside.

In March, the U.S. economy added 98,000 jobs, far below the 180,000 that economists had forecast, and significantly lower than the 219,000 job gains from February. The unemployment rate fell to 4.5%, but the underemployment rate continues to hover at around nine percent. And the labor force participation rate, which had been rising, was flat at 63%. (Source: “Employment Situation Summary,” Bureau of Labor Statistics, April 7, 2017.)

Consumers are optimistic about the short-term outlook for jobs and wage growth, but U.S. retail sales fell in March for the second month in a row. Retail sales slipped to a seasonally adjusted 0.2% after a 0.3% drop in February. Economists were expecting retail sales to fall 0.1% in March. (Source: “Advance Monthly Sales for Retail and Food Services,” United States Census Bureau, April 14, 2017.)

Since the Conference Board released its March Consumer Confidence Index numbers, another poll shows consumer confidence at its lowest point in five months. That essentially erases all the optimism that came from the Trump Bump. Consumer confidence is now back to the depressing days of the Obama administration. 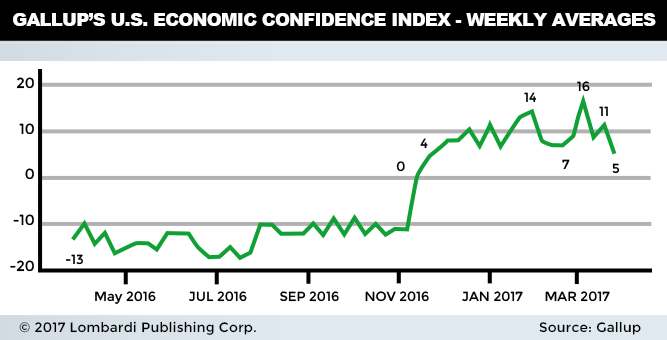 33% of respondents said the U.S. economy was good, while 22% said it was poor. But 48% said the economy was getting worse. Positive perceptions of the U.S. economy seem to have peaked in early March, when the stock market was doing well. Since then, consumer confidence has fallen in step with the markets. Judging by the gridlock in Washington, upcoming economic data is going to be underwhelming and stocks and consumer confidence look like they’re going to tumble.

Again, for stocks to move, there needs to be something to jolt them higher. That hasn’t happened yet, and if the recent actions in Washington are any indicator, it looks like Trump is going to have some difficulty getting his “America First” election campaign pledges (slash taxes, cut red tape, increase spending, impose tariffs) passed.

In late March, just after the Dow Jones Industrial Average and S&P 500 hit record levels, the stock market took a hit after it was announced that Trump had to shelve his American Health Care Act (AMHC) because the bill didn’t have enough votes to pass. Getting the AMHC passed was supposed to be an easy victory for Trump and the first of many feathers in his cap.

Therein lies the future for Trump. If he can’t get the AMHC passed, how can investors and the American public trust that any of his aggressive campaign pledges will get passed?

Tax cuts were one of the most popular talking points during the election and was one of the reasons why voters ushered Trump into the Oval Office. But after the healthcare setback, it appears as though the timeline for Trump’s ambitious tax reforms is on the backburner.

Tax cuts were one of the foundational pillars to economic reform, one that would juice the anemic U.S. economy to four-percent annual gross domestic product (GDP) growth. In 2016, U.S. GDP was just 1.6%. During Obama’s entire run as president, U.S. GDP averaged just 2.0%. Obama is the only president in modern history to have never had a year where GDP was over three percent.

It’s going to be almost impossible for Trump to realize four-percent annual GDP if he can’t get his tax reforms and infrastructure spending passed. Should Trump not get his “border adjustment” plan approved (tax imports but not exports) it will leave a $1.0-trillion gap in the Republican’s tax plans over the next 10 years.

Should the Republicans not be able to find the extra trillion dollars, it will mean additional borrowing. Keep in mind, Trump inherited a national debt that is at $19.89 trillion and deficit of nearly $600.0 billion.

Not only will these numbers increase under Trump if he can’t get his economic policies passed, but it also means the chances of sustainable economic growth and annual GDP of four percent is a pipe dream.

It won’t take long for this to trickle down to even bleaker economic data, which will put a serious dent in corporate earnings and consumer confidence, which could have a disastrous effect on the stock market.

The economic data rolling in right now does not predict an imminent U.S. economic collapse or suggest the U.S. is going to enter a recession in the second quarter. But it is underwhelming and shows the U.S. economy is getting worse, not better.  This is bad news for an economy that is fragile and stocks that are significantly overvalued.