The revenue shortfalls in state, county, and city pension systems keep growing, according to a new study released by the Hoover Institution. A study of the 649 different pension systems around the United States found systematic problems with the assumptions underlying many trusts, which is now coming to a head. This will have profound effects on citizens of all 50 states, as pension promises go unfulfilled and pressures build on governments to increase taxes. In short, a pension crisis is in the works.

The truth is, the problem with pensions have been brewing for years. For fiscal 2015 (latest data available), state and local governments reported a funding shortfall of $1.378 trillion, which was up $434.0 billion from 2014. Keep in mind, the former total is using new government accounting standards and perhaps doesn’t reflect the true nature of outstanding liabilities. Using market valuation techniques, the Hoover Institution found the real liabilities closer to $4.0 trillion ($3.846 trillion). (Source: “Hidden Debt, Hidden Deficits: 2017 Edition,” Hoover Institution, May 15, 2017.)

Underscoring the true enormity of the problem, the worst-funded state pensions would require 15%-25% of entire state revenues just to maintain current funding levels. As you might have guessed, some of the most socially and fiscally liberal American states are the worst offenders: Illinois, Nevada, and California (1-3 in order). Obviously, since it’s impossible for states to spend a quarter of their tax receipts just to keep pension funding afloat, the problem will likely get much worse.

For example, seven out of 10 polled New Jersey voters said they would support raising taxes on those making $1.0 million or more annually to avert a state pension crisis. However, 66% were opposed to sweeping taxes that would touch on low- to middle-income earners. (Source: “N.J. voters would raise taxes on the rich to fund public worker pension, poll finds,” New Jersey On-Line LLC, March 21, 2017.)

The problem with this scenario is that high-income earners own most of the power in the state legislature. It will be difficult for state governors to raise taxes on the rich without making it a shared responsibility. Individual influencers will lobby against it, as will business leaders and others with ingrained vested interests. Lower-income people don’t have these mechanisms.

Even if it becomes a shared problem among taxpayers, another problem emerges: almost no one believes raising taxes will fix the problem long term. For starters, something called the “liability-weighted average expected return,” chosen by pensions systems, averaged as 7.6% in 2015. At that rate, the value of invested money would be expected to double in about 9.5 years. That clearly did not happen. In other words, there’s a huge credibility problem people have towards the competency of those running the pension system, and the models which govern them. 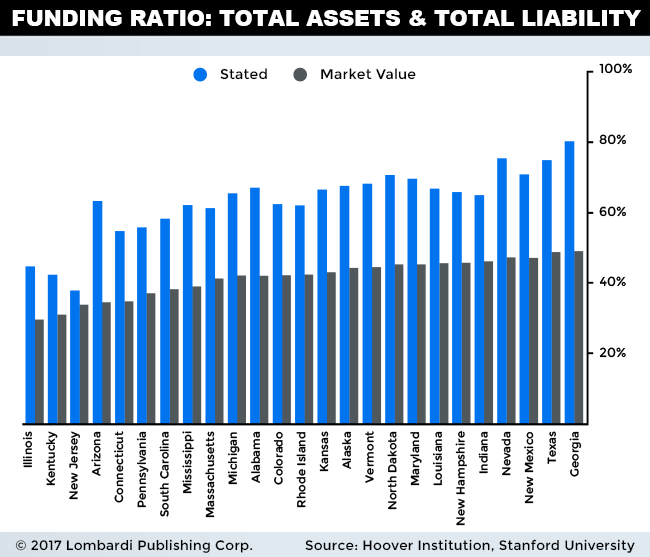 Secondly, the fact that pension systems have badly missed forecasts in the midst of a historic bull market is troubling, to say the least. Not all of these funds invest exclusively in stocks, but the bull market has been present in bonds, junk bonds, high-yield credit; quite a few things. What happens when the bull market runs it course and “normal” or negative returns start weighing on holdings? What happens if there’s a market crash? Shoveling more tax money at the problem is unlikely to fix it.

In the end, local and state government face tough decisions. Unfortunately, the usual remedial action will likely be proposed: taxation. If you haven’t thought about how you’re going to maintain your lifestyle in light of rising taxes and stagnant incomes, now might be a good time to start.