Silver is the Go-To Hedge as U.S. Economy Swoons

Silver prices (and precious metal prices in general) have been soaring following the release of a large swath of weak economic data showing that the U.S. economy continues to falter. Or rather, that the U.S. has failed to gain traction for a long, long time.

Silver prices are up approximately 45% since the start of the year, trading near $20.00 an ounce. That’s impressive enough after silver prices experienced a record four consecutive years of declines. But silver prices have been surging over the last number of days on the heels of weak U.S. economic data. Since August 31, silver prices have advanced almost 6.5%.

The U.S. non-manufacturing purchasing managers index reading for August was 51.4 versus 55.5 in July. Over-optimistic analysts were expecting a repeat reading of 55.5. This represents the lowest reading in six years. (Source: “August 2016 Non-Manufacturing ISM Report On Business,” Institute For Supply Management, September 6, 2016.)

This follows downbeat U.S. jobs data for August, where just 151,000 jobs were added to the U.S. economy. Again, overly optimistic economists were expecting 180,000 jobs to be added. In keeping with the downbeat data, the U.S. Department of Labor also showed that wage growth slowed and that the unemployment rate stood firm at 4.9%. Overall, the underemployment rate continues to hover at around 10%. (Source: “Employment Situation Summary,” Bureau of Labor Statistics, September 2, 2016.)

Investors remain bullish on silver, not just because the world’s biggest economy is stumbling. The world’s biggest economy region is also on hiatus. European Union (EU) GDP growth has been stuck in a quagmire at around 0.5% for more than five years now. (Source: “Preliminary flash estimate for the second quarter of 2016,” Eurostat, July 29, 2016.) 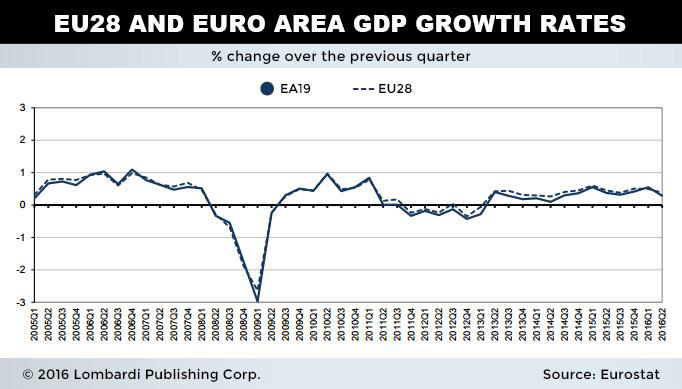 Taken together, this means there is virtually no chance that the Fed will raise its rates when it meets next in September. Those who have been reading these pages will know that we have been saying since January that the Fed will not raise rates again until early 2017 at the earliest.

The data simply doesn’t support any sort of rate hike. Raising rates prematurely, as the Fed did in December 2015, helped kick stocks over the edge in January. It doesn’t want to do that in the run-up to the presidential election.

As a result, silver prices will remain bullish for the foreseeable future.