Stalling U.S Economy A Key Indicator Of a U.S. Recession

Sadly, there isn’t one single metric you can look to for predicting the state of the U.S. economy, though I wish there was. Wall Street seems to think there is one, with analysts and brokers constantly pointing to the record levels on the NYSE and NASDAQ as proof that the U.S. economy is chugging along. That’s a little narrow—and desperate.

For months and months now, we have been seeing broader economic data that suggests the U.S. economy is simply not doing very well. The U.S. economy has done so poorly for so long that it is in more danger of stalling and slipping into a recession than it is churning out solid, sustainable growth numbers.

The Upcoming Economic Recession in 2017 Has Already Begun

I enter as evidence the drop in the Institute for Supply Management’s service gauge, which apparently caught many off guard, coming in at 51.4 in August. A reading over 50 indicates that the industries that make up roughly 90% of the U.S. economy are expanding. (Source: “August 2016 Non-Manufacturing ISM Report On Business,” Institute for Supply Management , September 6, 2016.) 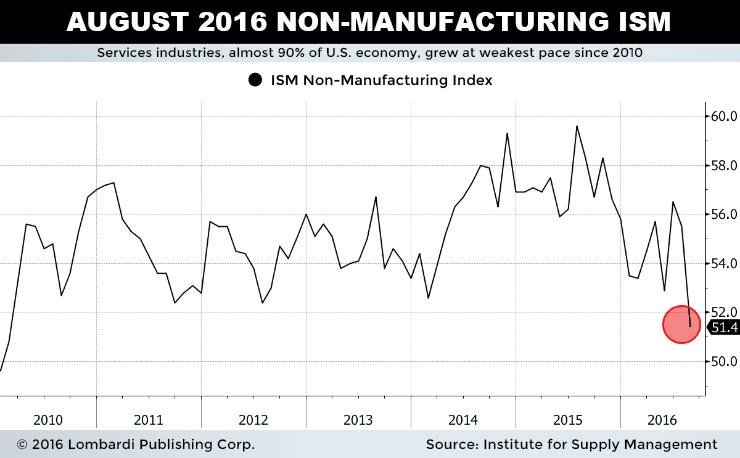 This is not just a sharp decline over July’s reading of 55.5; it’s also a drastically different outcome from the predicted reading of that same number. All told, August’s contraction in manufacturing represents the lowest reading in six years.

By comparison, on the July survey, only three industries showed contraction.

Taken on its own, maybe it’s a hiccup, but there were other figures to suggest it’s more than that: first- and second-quarter GDP were bad, hiring is down, wage growth has slowed, underemployment levels remain near 10%, and auto sales are falling. This is not the kind of data that suggests that the world’s largest economy is enjoying sustainable growth.

And What About Those Record Index Levels?

The markets may be at record levels but it isn’t because stocks are churning out stellar revenue and earnings growth. Stocks are doing well because we’re in a Central Bank driven market. Stocks rise and fall based on whatever mood the Federal Reserve is in.

August’s weak economic data suggests the Fed will not hike its key lending rate when it meets again later in September. Investors will continue to be unhappy earning zero interest on their income investments and turn their attention to the only games in town, dividends and capital gains.

You could almost say investors are, in most instances, throwing good money at bad stocks. We’re five months into an earnings recession with no end in sight, and yet miraculously, stocks are rising.

It doesn’t add up. Stocks are at record levels, we’re in an earnings recession, 90% of the economy is stalling and dangerously near contraction levels, and the average American is in bad shape.

All of this should cause concern about the health of the U.S. economy and potential for a recession in 2017. But it isn’t.