What Does the Shrinking U.S. Workforce Mean for the U.S. Economy?

The fate of the U.S. economy—and in some ways, the world economy—is hanging on the whims of Federal Reserve Chair Janet Yellen. Her decision over the course of the nominal interest rate this year and 2018 could affect many economic issues. Raising rates should lead to a higher dollar. In turn, that tends to force down the value of gold and other precious metals. However, raising interest rates could also affect growth and U.S. jobs; in other words, they could cause economic collapse.

Janet Yellen’s indicator of preference to explain—or rather, to justify—her interest rate decisions is the Job Openings and Labor Turnover Survey, a.k.a. JOLTS. The U.S. Bureau of Labor Statistics compiles the JOLTS report. It’s not an analysis of the habits of caffeine saturated workaholic zombies; it reports job openings, hirings, and layoffs. The problem is that the JOLTS reports have defied logic.

One moment, they’re suggesting that more Americans are finding employment. The next moment, depending on the analyst, JOLTS suggests that there are more unemployed Americans. To get an idea of what it’s like for analysts to interpret the rather temperamental JOLTS reports, imagine having to wait on Mariah Carey, Jennifer Lopez, Beyoncé, Cher, and Kanye West.

The best possible outcome of that feat is a migraine and a head spinning from the many and contradictory demands and expectations. This is the kind of confusion that leads to economic collapse.

Indeed, the latest JOLTS report claimed that the U.S. job market had reached a record level of activity. More person-wanted ads were published in April than ever. Yet mysteriously, nobody was being hired. (Source: “Reverse Schizophrenic” JOLTS Report: Job Openings Plunge As Hiring Soars,” ZeroHedge, July 11, 2017.)

Part of the problem is that the BLS publishes statistics, which the JOLTS report further analyzes and publishes the information from two months later. It turns out that economists analyzing the BLS data were right to feel bewildered; the revised BLS data suggests thatthe  April jobs report actually shows the number of job openings crashing. The downward revision shows that the job openings rate was not 3.9%, as first reported, but 3.9%. (Source: Ibid.)

Interpretation of Economic Data Is More Art Than Science

Still, the art is all in the interpretation of the data. Janet Yellen might as well be Michelangelo at this point. She has fixated on interest rate hikes, and no amount of evidence that the U.S. is staring at the possibility of economic collapse will change the Fed’s course. Wage and employment growth are stagnating. Instead of focusing on why that’s happening and what to do about it, the Fed sees higher interest rates as the solutions to all problems.

Meanwhile, the Fed has raised the cost of money again, because that’s what higher interest rates mean. It also announced that it’s considering an additional rate hike before the end of the year. That might seem like a responsible plan, but it has risks when the stock market is trading at unprecedented peaks.

To be clear, the federal funds rate is the main instrument with which the Fed regulates the inflation rate. The point of increasing the nominal interest rate is to make credit more expensive. This makes it more expensive for businesses and families to borrow, so the economy slows down and inflation falls. Conversely, if the central bank wants to stimulate economic activity, it reduces the interest rate. This happens because companies are encouraged to borrow and invest to grow, fueling the economic cycle.

American interest rates have now gone beyond the “zero point” level. To add some frightening historical context, interest rates haven’t been this high since Lehman Brothers led the Wall Street landslide in September 2008. Janet Yellen’s plans are based on her expectations that the U.S. economy will experience an upswing by the end of the year, based on an apparent “positive” trend.

Like Europe, the Fed’s goal is to see inflation grow. But it also wants to preempt a runaway inflation phenomenon. The problem is that to have inflation, you need growth, and higher interest rates are going to kill what little growth exists. The Fed is dreaming about an inflation rate of about two percent and wants to stop it there.

The way to achieve this cooling down of the U.S. economy is to slowly reduce investments in treasury bills. The Fed increased such purchases in the wake of the 2008 financial crisis to confront the deflationary effects of that event. That would all make sense if the U.S. economy, as measured by GDP, were growing at the kind of rate President Donald Trump had expected–that is, three percent or higher. But it isn’t, and the signs are not pointing to anything of the sort taking place now. Neither is jobs growth. 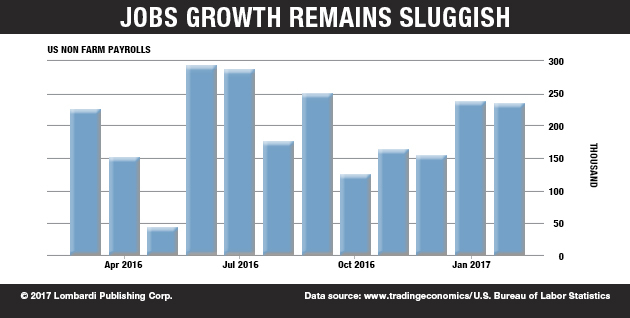 In other words, the Fed is raising rates prematurely, compromising what little growth there is. Moreover, raising rates at this delicate moment, when more than half the Congress and even more of the media are rambling on about Trump and Russia, poses a major risk of financial and economic collapse.

Janet Yellen and the other Federal Reserve governors were not born yesterday. They hold their positions because they are competent. Evidently, they know that pulling the interest rate trigger too quickly, will stunt whatever (if any) economic growth stimulus there is. The economic recovery of which so many speak about remains elusive for even more people.

Beyond the statistics and their financial manipulation, real brick-and-mortar shops are closing and real cars remain unsold in parking lots. Meanwhile, all too real people continue to lose jobs, regardless of what the JOLTS report says. The only thing that’s improving in the economy is the stock market. Thanks to the widespread use of adjusted earnings. (Source: “There’s a ‘tsunami siren’ sounding in the stock market that should have investors scrambling,” Business Insider, July 10, 2017.)

However, the stock market reflects less the state of the economy and more the risk appetite of its investors. Companies’ valuations–especially when manipulated by downplaying special subsidies or employing “special” accounting–can even defy their actual earnings; just look at Tesla Inc (NASDAQ:TSLA) for that. The Fed, being made up of smart people, understands the risks.

Indeed, the Fed, more than any other institution, knows that a market crash in the world’s largest economy would sink the whole world. The current U.S. macroeconomic data does not justify raising rates, and the Fed knows this. Higher rates are dangerous, but even more dangerous is the risk of a massive hemorrhage on Wall Street. The Fed finds itself in a “damned if you do, damned if you don’t” position.

It must discourage the bullish sentiment and trigger a mild bear market. But how to achieve this balance is tricky. The lesson of 1937 is rather handy. Most Americans know that the global economy suffered a great deal from the 1929 crash. So much so, in fact, that many historians attribute the misery it caused as one of the causes of World War II.

The Fed might be right to want to cool down the stock market, but it must at all costs avoid repeating the mistake of 1937-1938. In that period, after years of growth in the wake of the massive 1929 crash–the likes of which were not experienced again until 2008–it started to raise interest rates.

The economists’ concerns then sound familiar today. There was a fear that the economy was growing too quickly and that inflation could get out of hand. Such as statement would find total harmony with what Janet Yellen has been saying throughout 2017. Eerily, the crash of 1937 happened in the summer and the Fed started raising rates in 2016.

Whether in comedy, investing, or the economy, timing is everything. A similar phenomenon, prescient but mild, happened more recently; you remember 2013, with a slowdown in the U.S. real estate market after the rise in interest rates on mortgages following the speech from then-Fed Chairman Ben Bernanke in May.

Investors seem to expect a reversal of policy from Janet Yellen. Perhaps, they think, the economy faces too much political risk from the Trump White House and the continued shadow of impeachment proceedings based on allegations of Russian collusion in the 2016 elections. It need not be true to stick.

The Democrats are biting to the Russian hacking narrative like a Doberman and they’re not letting go. After repeating the mantra long enough with the mainstream media echoing and amplifying the message, even Trump’s famous tenacity could cave in. Thus, investors don’t see how in the face of such risk, the Fed might push interest rates beyond the one-percent mark.

Meanwhile, just as the Fed learned in 1937, the conditions for an acceleration of inflation have not materialized just yet. The Fed should take more time before pushing rates beyond the edge and trigger a market and an economic collapse. It is necessary and will ensure that the US economic recovery is sufficiently robust before rates can go higher.

Inflation is low and below target. Actual GDP growth is also below target, while employment and wage reports are neither here nor there. An economy in this state cannot tolerate an increase in interest rates without falling into recession. Moreover, the banks are the ones who would benefit from higher rates, not the American people.

Let’s be clear: those who lend money want the higher rates, while higher inflation helps debtors by reducing the real value of their debt. So it’s in the interest of heavily indebted U.S. consumers to see inflation going higher without anyone trying to raise rates. Higher interest rates slow down economic growth.

The situation today can be summarized as follows. Employment appears stable, but caught in contradictory forces. Meanwhile, inflation is low and stable. Public and private debt are at the highest levels in decades, while growth stands well below the historical average. In other words, the next interest rate hike could break the proverbial camel’s back and trigger economic collapse.

U.S. Economy Isn’t Out of Danger Zone Yet; Expect Problems in 2021

A Commodity Supercycle Could Be Ahead; This Is What You Need to Know
Moe Zulfiqar, B.Comm.

A Giant Stock Market Bubble Is in the Making, and It Won’t End Well
Moe Zulfiqar, B.Comm.