Rising Public Debt to GDP Ratio in 2017 Could Trigger a U.S Economic Collapse

Could a Rise in Public Debt to GDP Ratio 2017 Trigger Economic Collapse 2017?

While Donald Trump ponders a war with North Korea, debt continues to dampen America’s economy. U.S. household debt delinquency has not dropped. That is always one of the key symptoms that the system is suffering from the kind of illness that culminates in a U.S. economic collapse. It’s not just household debt, public debt has also not shown any improvement.

The public debt to GDP ratio has long been unsustainable. It has been rising with few prospects of slowing down. Meanwhile, household debt, one of the triggers of the last financial crisis, is reaching alarming levels again. Keen observers wondering when will the economy collapse don’t need to look any further than that.

Mounting personal debt is a sure predictor of bankruptcy. Expect bankruptcies numbers to speed up in 2017. The Federal Reserve has already increased nominal interest rates. The Fed Chair, Janet Yellen, has made it clear she intends to pursue more hikes—as many as three—in 2017. In basic terms, higher rates simply means that borrowing will be more expensive.

Many already debt-burdened consumers and businesses will have few alternatives to emerge from debt than to declare bankruptcy. American households already owe, collectively, some $12.0 trillion. Even those who were once considered to represent the middle class are finding it difficult to move away from a paycheck-to-paycheck existence.

All it takes is a fraction of a percentage-point interest rate increase to push finances over the edge. When the collection agencies start calling, few will be able to avoid bankruptcies. Consider that all it would take to send more than half of all Americans to the brink of bankruptcy is a sudden $500.00 expense.

In 2007, the signs of the financial crisis came in the form of subprime mortgage defaults. Because of revised banking practices, encouraged by the Dodd–Frank Wall Street Reform and Consumer Protection Act, banks have applied tougher rules for mortgage lending. But over the past few years, there has been a similar phenomenon applied to car loans.

Non-Housing Debt Is Going Way Up

Let’s call this the subprime loan bubble. It’s about to explode because delinquency is going up. Statistics are often brandished and exploited to push different agendas. However, there’s no other way to interpret the one about total household debt levels. Non-housing related debt levels are going way up. (Source: “US household debt ticks up in Q3, auto delinquencies rise,” MENAFN, November 30, 2016.) 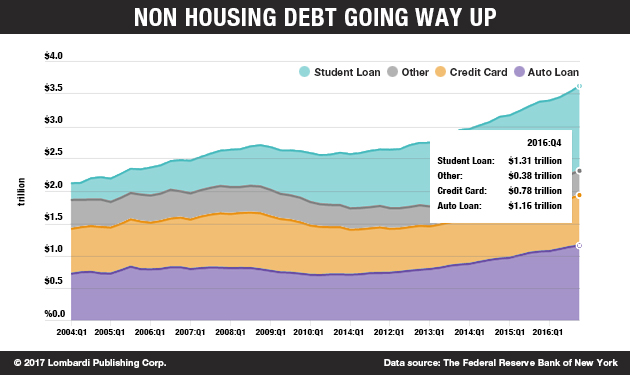 The CBO predicts that the debt to GDP ratio could reach out-of-control status. It could go as high as 89% in 2027 and 150% by 2047. Even those who don’t understand what debt to GDP implies can see that any kind of debt to GDP that rises from the current level of 77% to 150% is a problem.

The CBO says that over the next 30 years, rising national debt and the deficit will reach dizzying levels. The debt to GDP ratio could hit 150% by 2047. The CBO has warned that if the current public spending framework remains unchanged, a fiscal catastrophe will be unavoidable. (Source: “Massive debt increase forecast by Congressional Budget Office,” CBS News, March 30, 2017.) 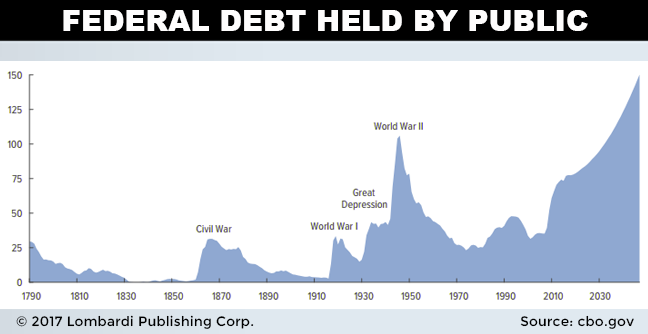 Adding more color reveals more risk for the long-term and overall economic outlook for 2017 itself. That added detail is that the CBO’s 150% predictions are based on current spending levels. Nobody knows how Trump’s fiscal plan, if he goes through with it, will affect spending. That means there’s a risk that the 150% debt to GDP ratio could come much earlier than predicted.

Indeed, rising U.S. national debt in the coming decades could damage the economy by limiting the government’s future fiscal options. The prospect of this debt poses substantial risks to the nation. The CBO’s warning sounds like another way of asking Americans to prepare for an upcoming economic collapse.

What’s more, the CBO has attributed blame for rising debt levels on the higher interest rates. The Federal Reserve has maintained interest rates at low levels since the 2008 U.S. economic crisis began. Now, the sudden gearing up towards higher rates this year will shock the system. One interpretation of the CBO’s warning is that an economic collapse in 2017 is likely.

The problem, says the CBO, is that the debt increase will have one overwhelming effect, offsetting any other expected gains. It will add to the debt burden for which the government will be forced to take higher interest rate loans in order to pay back its debt. The larger the deficit—inevitable given the aging population and the related pension and healthcare—the more the government will need to borrow.

Debt Is a Vicious Circle

It’s a vicious circle whereby the government will experience a position no more enviable than a subprime mortgage borrower in 2006. That is to suddenly become unable to make the monthly payments because of an increase in interest rates. Former Pennsylvania governor Ed Rendell has warned that the U.S. will spend as much on interest as on the Departments of Homeland Security and Veterans Affairs combined this year. (Source: CBS News, op cit.)

Moreover, there will be a shortage of credit. That’s because investors may become less likely to finance federal loans unless they can obtain high returns. The losses will affect mutual investment funds, pension funds, and insurance companies. Banks and financial institutions might even fail, creating a huge fiscal crisis and an economic crisis in 2017.

Hence, the CBO urges the government to prioritize reducing debt. One way to start might be to restructure debt, namely to try to modify existing contractual terms, use monetary policy to adopt large spending cuts, or raise taxes. Neither one of the latter prescriptions is on the Trump agenda. Trump’s supporters voted for tax cuts and for large infrastructure spending.

Meanwhile, even if the government manages to contain the debt to GDP problem, there’s still the issue of private debt. That’s what sparked the 2007-2008 crisis. The Obama administration’s monetary and credit policies exacerbated the problem. The liquidity injections failed to achieve their intended purpose of helping so-called middle-America recover.

National Debt Has Gone Out of Control

National debt under Obama grew some 86%, or by about $9.0 trillion. It’s not all Obama’s fault. Obama inherited a bad debt situation from his predecessor G.W. Bush. (Source: “Here’s how much debt the US government added under President Obama,” Business Insider, January 20, 2017.)

Moreover, Obama started his term on the back of the 2008 financial collapse. He was the first president faced with the task of cleaning up the mess of the subprime disaster. Thus, Obama was forced to put America further into debt. He borrowed to “spend” to encourage the U.S. recovery. You can’t fully blame Obama for the weak recovery.

Still, it wasn’t surprising that the Democratic Party lost the presidential election in such a spectacular way. But, Obama merely perpetuated a pattern of running the economy that offers few alternatives. It will be interesting to see whether President Trump can find an alternative. But, frankly, so far, there’s little indication of that.

Before the crisis, U.S. national debt was about $10.0 trillion. Now, it has doubled to $20.0 trillion. Clearly, the United States has no room to confront further debt growth. Yet, the debt has nowhere else to go but up, which explains why so many are entertaining economic collapse predictions these days.

Debt, typically denominated in U.S. dollars, is increasing worldwide. But Trump’s isolationism, should he go through with it, will cut off the U.S. from global trade. This means there will be smaller and fewer markets for American products. Moreover, the Trump tax plan could flop as loudly as the president’s effort to repeal Obamacare.

In short, the Republicans want to start by lowering corporate taxes. That’s not a bad idea in itself. But lowering those taxes won’t yield any benefits unless overall demand increases. Meanwhile, it will add more trillions to the national debt.

The second part of the plan, lowering income taxes, will really only benefit the rich. The lower and middle classes will not see significant drops in taxes. That means they won’t see any meaningful improvement in their take-home income and ability to shave off their personal debt. That, in turn, will do nothing to fuel demand.

Moreover, the markets don’t like unpredictable factors. Government bonds remain a haven in the event of a shock. Donald Trump’s strange and, frankly devious, foreign policy shift towards the same belligerence he accused Hillary Clinton of pursuing will have a price. It’s less the belligerence and more the sudden turn that has been a source of great concern to investors. U.S. long-term rates have declined and gold has appreciated. The market sentiment is starting to signal fear.