How is it possible for millions of dollars to have been added to Tillerson’s net worth this year?

Tillerson received millions of dollars in severance package due to his former position as CEO of Exxon Mobil Corporation (NYSE: XOM). Tillerson held the top position for 10 years and, at one point, he made it the most valued company in the world.

Before getting into the full details of how Tillerson boosted his net worth, the sequence of events is something important to consider.

Tillerson started working for Exxon in 1975 as a production engineer. He was known as a hard worker, and he moved up the corporate ranks. In 1989, he became the general manger of one of the divisions in the United States. A few years later, Tillerson become the president of a division in the Middle East.

Eventually, in 2006, Tillerson become the CEO of the entire company. In total, Tillerson has given 40 years of service to Exxon Mobil. His decision to leave the company was unplanned.

When Trump was forming his team, he wanted the best of the best. A difficult position to fill was the role of Secretary of State. On one hand, Trump wanted someone he could trust and someone who could repair the Russia-U.S. relationship. Trump consulted his team and Tillerson’s name came up. Within weeks, Tillerson was part of the administration. 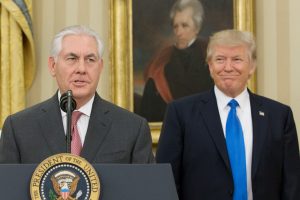 Tillerson was selected because of his experience at Exxon, a global energy company that included operations in Russia. Trump believed that Tillerson was perfect for his on-location experience in Russia, working alongside the Vladimir Putin government. Trump thought he could leverage this personal and business relationship for the good of U.S.-Russia relations.

With Tillerson accepting the position of Secretary of State, he was required to leave his executive position at Exxon. The move resulted in Exxon naming a new CEO and giving Tillerson a huge severance package.

If Tillerson did not take the position as Secretary of State, he would have been eligible to receive a retirement package later in 2017. Since he received an early payout, there are some rules that Tillerson had to follow in order to receive the full $180.0-million package.

The $180.0-million severance payout will be made over 10 years into an independent trust. The deal was based on the market value of two million shares.

One major clause in this agreement is that Tillerson must stay out of the oil industry for the next 10 next years. If Tillerson decides to re-enter the oil industry within this 10-year period, all of the money within the trust will be donated to charity. Based on Tillerson’s age of 65, it is highly unlikely that he will break this rule and surrender the large payout.

Tillerson Still Has an Exxon Connection

After everything is said and done, Tillerson still owns a stake in Exxon. He owns more than 400,000 shares, which are valued at roughly $38.0 million. This position of ownership can remain within the company with no questions asked by any regulators, even though Tillerson has a position in the federal government. (Source: “Exxon Mobil Corporation Ownership Summary,” NASDAQ, last accessed October 5, 2017.) 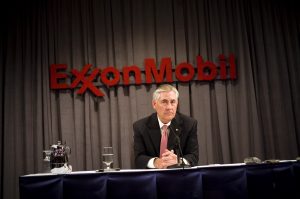 As another example, when Dick Cheney was vice-president of the United States, he held a position at Halliburton Company (NYSE: HAL), which was a government contractor at the time. Cheney was not forced to get rid of his ownership stake in that company.

Today, based on Tillerson’s reported net worth, he is one of the wealthiest individuals in Trump’s administration team.