Here we’ll go through former Exxon Mobil Corporation (NYSE:XOM) CEO Rex Tillerson’s background, net worth, education, age, family, and more. After all, since Tillerson is currently the Secretary of State for the United States, it may interest you to know more about him. If you’re looking for the equivalent of a Rex Tillerson wiki, you’ve come to the right place.

In this article, we will see everything about Rex Tillerson’s Net Worth, Wife, Political Career, Family & Facts to know.

Rex Tillerson was born in Wichita Falls, Texas in March 1952, making him 65 years old as of this writing.

Rex Tillerson attended and graduated Huntsville High School in Texas in 1970. He continued his education at the University of Texas, where he received a bachelor of science in civil engineering in 1975, the same year Tillerson joined Exxon Mobil. 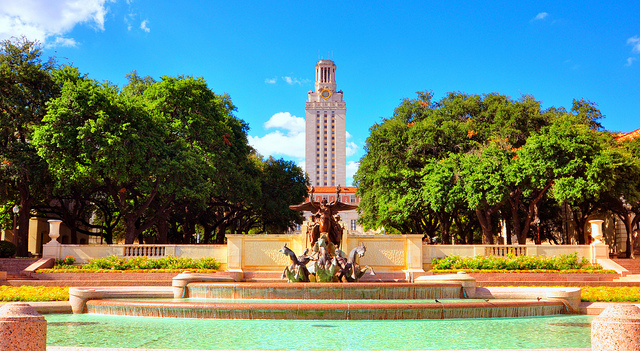 Rex Tillerson’s current net worth is $300.0 million, the majority of which comes from his time as CEO of Exxon Mobil.

Tillerson was at Exxon Mobil for 40-plus years, starting out as as a production engineer before gradually moving up the company’s corporate ladder. A series of promotions, leading to him becoming the leader of the company, also resulted in Tillerson being one of the largest independent shareholders of XOM stock.

Exxon, being the largest oil company in the world based on market cap, reflects positively on Tillerson’s net worth. And by leaving the company, he has received an additional $180.0-million severance package.

Tillerson has always been linked to the Republican Party, being a donor to various election campaigns. He has made donations to the campaigns of George W. Bush, Mitt Romney, and Jeb Bush. While he didn’t donate anything to President Donald Trump’s campaign, Tillerson did take Trump up on his offer to become Secretary of State. 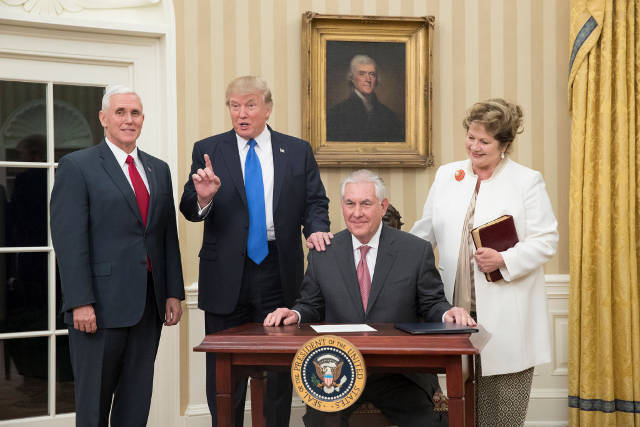 Then, on January 20, 2017, Trump nominated Tillerson for the position of Secretary of State, which was approved by the Senate Foreign Relations Committee. After that, the final approval was in the hands of the full Senate, which voted in favor of Tillerson. He was officially sworn in on February 1, 2017.

Rex Tillerson has been married twice. He divorced his first wife, with whom he had twin boys. Both sons ended up completing bachelor’s degrees from the University of Texas.

In 1986, Tillerson married Renda St. Clair. Like Tillerson, St.Clair was married before, and had one son with her previous husband. Together, Tillerson and St. Clair have four children and five grandchildren.

Bartonville is where St. Clair grew up, and is currently the couple’s current primary residence. Most of St. Clair’s time is spent on philanthropy work for causes close to her heart; her efforts are normally not made public, and she lives a very private life. 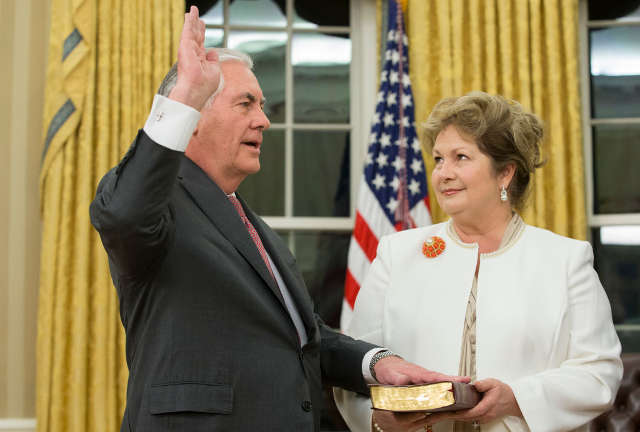 Rex Tillerson, with his wife Renda St. Clair holding the Bible, is sworn in as the 69th secretary of state in the Oval Office of the White House (Credits: Pool/Pool/Getty Images)

In 2012, the couple joined their neighbors in suing to stop the construction of a water tower that would be used for fracking (among other things) near the Tillerson residence. They argued that the project would violate the city’s zoning rights. Despite the couple’s involvement, the city would not budge. However, in 2014, despite a lot of pushback from residents, the judge presiding over the case threw out the claims. The Tillersons then removed themselves from the lawsuit.

Other than this instance, Renda St. Clair has mostly stayed out of the spotlight.