It’s beyond anything we’ve ever witnessed. Stocks keep grinding higher, unperturbed by valuations, geopolitical issues, or over-investment risk. The gains are seemingly never-ending, and most Wall Street pundits believe that further gains are likely next year.

But, heading into 2018, is there anything that could derail the equity freight train? Perhaps. That risk factor could come from a bond market sell-off, which would tempt big institutional funds to exchange stock gains for higher “risk-free” returns.

This scenario is really quite simplistic. The higher interest rates that bonds return, the more attractive they become relative to stocks. Valuations are already at the top 95-percentile of historical norms. And, with the NASDAQ and S&P 500 both having risen over 400% since the depths of the Great Recession, it won’t take much for institutions to start rotating out of stocks.

But, as long as it does, the Federal Reserve may continue its interest rate increases, further pressuring the bond market. With futures markets calling for another January rate hike, combined with tightening labor markets and simmering inflation pressures, the potential for rapid rate increases exists.

What Can Go Wrong?

Despite the strong economy, the spread between two-year and 10-year bonds has been narrowing. This recently hit a cycle low of just 55 basis points. The short end of the curve has been more responsive than the long end to rate hikes—almost as if the market doesn’t believe that the strong growth will last.

But what if the market is wrong? What if President Donald Trump’s newly-passed tax reforms—projected to save thousands of dollars for tens of millions of middle-class families—further boosts the economy?

It’s a scenario which could lead to stronger growth than anybody could imagine at this point in the cycle. If the Fed responds by further raising rates, and the long end doesn’t move, it could have explosive consequences.

According to Piper Jaffray managing director and senior technical research analyst Craig Johnson, it could lead to the “coiled spring” scenario. “Think about what can go wrong in this kind of scenario…But I think the bigger worry is, rates at the long end respond, we get a meaningful sell-off, and the more pressure that we build at that short end down there, the more that kind of compressed spring is getting built into the fixed income market,” said Johnson. (Source: “Johnson on 2018 Bond Market Sell-Off, Bitcoin, and Commodities,” Financial Sense, December 19, 2017.)

Should this happen, Johnson believes a big sell-off in fixed income would hit equities and trigger his drop scenario. That scenario entails a 15–20% decrease over the course of a few months, depending on how high bond yields rise. A potential flash point could be the 10-year yield finishing above 2.6% or 2.7%. A closing high above these levels would signal a technical breach of perhaps the most important trend line in finance: 10-year bond yields. 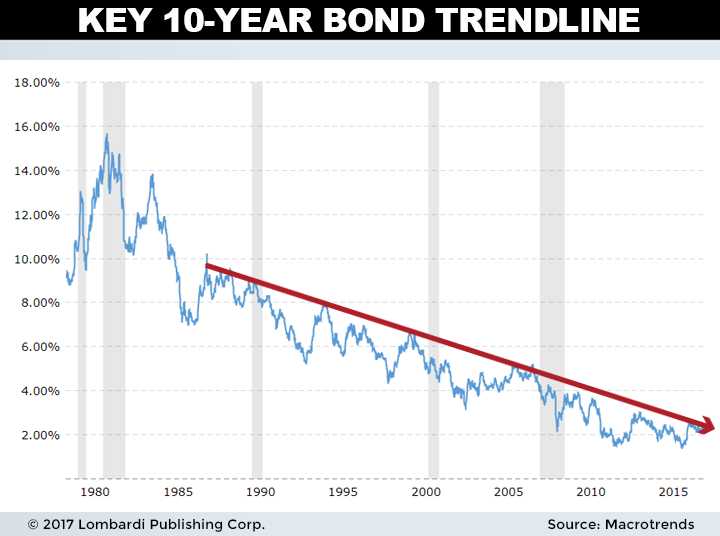 Johnson isn’t the first one to raise alarm bells. Back in late October, famed DoubleLine Capital Chief Executive Jeffrey Gundlach was spouting the same platitudes. With the one-year Treasury note yielding 2.44%, he tweeted that bond yields had hit “a critical juncture,” and he wondered whether a “moment of truth” was taking place. While Gundlach’s comment marked a temporary high point, the 10-year Treasury note yield recently went on to test 2.5%.

The moment of truth has arrived for secular bond bull market! Need to start rallying effective immediately or obituaries need to be written.

I would further add, the Fed’s quantitative tightening (QT) remains a much-underappreciated threat to a sell-off in Treasuries. Although Wall Street remains mum, the Fed is poised to let hundreds of billions of dollars in bonds retire in 2018, in an attempt to reduce its $4.0-trillion balance sheet. With the bond market’s biggest buyer becoming a net seller, rising yields have the potential of getting disorderly.

After all, who wants to own 10-year coupons yielding at the rate of inflation? More importantly, which buyers are big enough to quell a stampede out of bonds, with the Fed sitting on the sidelines?

Could a bond market sell-off finally torpedo the stock market rally in 2018? Absolutely. While we’re not necessarily projecting this to happen, many of the ingredients are present to ignite such a sell-off: the economy is bordering on overheating (with middle-class discretionary income poised to rise in 2018), the labor market remains tight, the Fed keeps hiking rates, and the Fed will begin paring its balance sheet. All this threatens the topple the 30-year bull market in bonds.

Long term, perhaps the trends aren’t so forgiving. But that’s a topic for a different day. For investors looking to invest in the stock market in 2018, we suggest monitoring bond yields closely. If the rubber band snaps and yields skyrocket toward three percent and beyond, it may give institutional investors the reason they need to ditch equities on a larger scale. If that happens, the market is vulnerable to a sizable decline.