The NYSE and NASDAQ have been on a bull run dating back to March 2009. Over that time, the NYSE has soared more than 160% and recently hit a record-high close. The NASDAQ has been even more bullish, soaring more than 315%; it too recently closed at a record high.

Stock valuations continue to climb higher even in the midst of lackluster earnings. In fact, the final numbers are in for the second quarter and the U.S. stock market doesn’t have a lot to be excited about.

All but two companies in the S&P 500 have reported their second-quarter fiscal results. For the 498 that have, the blended earnings decline for the S&P 500 is -3.2%. This is the first time the S&P 500 has recorded five consecutive quarters of year-over-year declines in earnings since the financial crisis. (Source: “Earnings Insight,” Factset, September 2, 2016.)

Sure, the markets experienced a 10%-plus correction earlier in the year, but it was short-lived. It was more of a hiccup than anything. In the face of underwhelming quarterly results, the markets have trudged higher.

Admittedly, most analysts believe there is a real disconnect between record-high stock prices and the underlying fundamentals. For the bull market to continue, investors will need to see sustainable revenue and earnings growth. But there’s nothing to suggest that is going to happen any time soon.

For starters, the U.S. economy has been hurling out some dud numbers. Second-quarter GDP expanded just 1.1%; this is slightly better than first-quarter growth of 0.8%. For the first half of 2016, GDP growth was a paltry 1.0%. It’s pretty tough to justify record stock price levels during an earnings recession and inconsistent, mediocre GDP growth. (Source: “Gross Domestic Product: Second Quarter 2016 (Second Estimate),” Bureau of Economic Analysis, August 26, 2016.)

Since the third quarter of 2014, the U.S. economy has failed to gain traction. While some believe it looks like the U.S. economy is slowing down, it feels like it’s about to stall. This does not bode well for overvalued stocks.

Nothing last forever. That includes the current bull market. What the current situation does suggest is that valuations are very expensive and ripe for a serious correction. One of the most important technical metrics, the price/earnings (P/E) ratio, shows that the S&P 500 is way above its five- and 10-year averages. 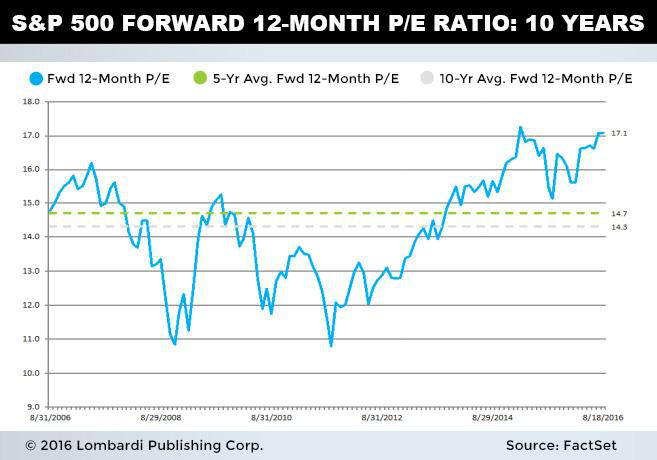 How overvalued are stocks?  According to the Shiller cyclically adjusted price-to-earnings ratio (CAPE) ratio, the S&P 500 is overvalued by around 44%. The 10-year average for the ratio is 15; today it’s at 27.07. That means for every $1.00 of earnings a company makes, investors are willing to pay $27.07. (Source: “Cape Ratio,” Yale University Department of Economics, last accessed September 6, 2016.) 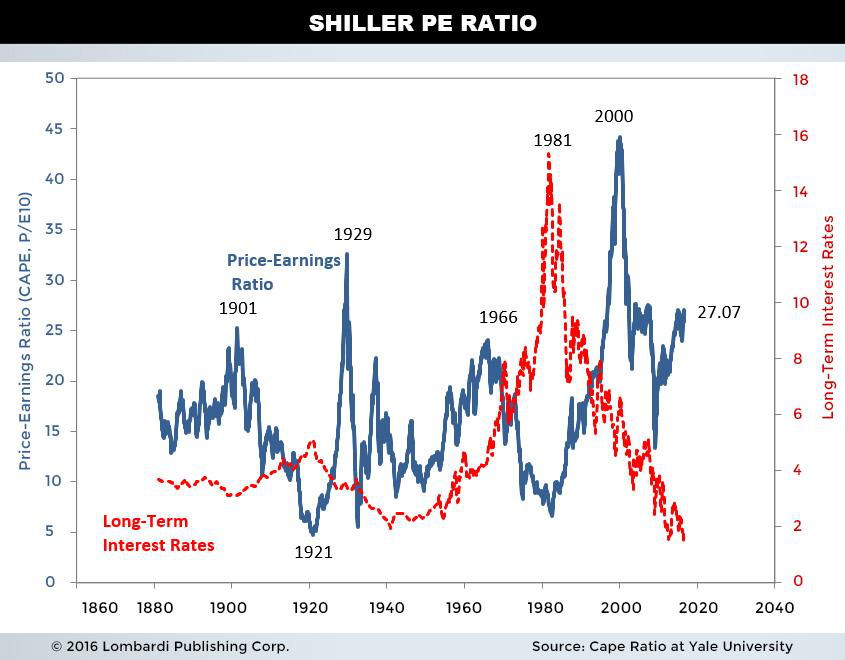 As you can see from the above chart, the only time this ratio has been higher was in 1929, 2000, and 2007. This makes U.S. stocks vulnerable to a serious correction. How far depends in part to how investors react. Historically, investors tend to be knee-jerk and run for the exits with reckless abandon.

If investors can elevate stocks to irrational levels, who knows what those same investors can do when the markets turn. With the U.S. economy stagnating, the European economy faltering, and concern about the U.S. presidential election, a 10% correction similar to the one earlier this year is certainly warranted, but the markets could just as easily fall much lower.