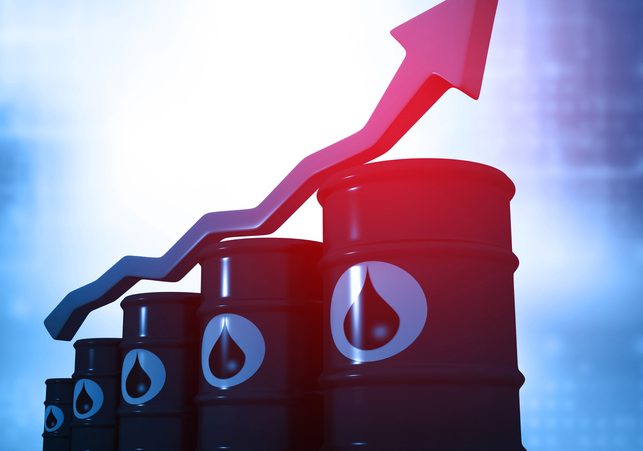 You Should Pay Attention to the Oil Price; It Could Trigger Another Recession

You would not know it from the mainstream business headlines, but the oil price trend toward $80.00 per barrel and beyond could spark another 2008 subprime-like recession.

Some have mocked President Donald Trump, but he’s absolutely justified in tweeting and complaining about the rising oil price. Trump’s main goal is to accelerate U.S. economic growth and higher energy costs are a harbinger of recession.

Oil producers from the Organization of the Petroleum Exporting Countries (OPEC)—that is, Saudi Arabia, Qatar, Iran, Iraq, and others—are worried, after all. OPEC made cuts in 2016, continuing in 2017.

While slow to produce an effect, this started to push oil prices beyond an optimal level. By “optimal level,” I mean an oil price high enough to support the economies of the producing states and affordable enough to sustain demand.

The Oil Price Has Dire Implications for the Global Economy

A recession in the world’s top economies would fuel an oil glut, dropping prices in a manner OPEC would be unable to control. In other words, excessive oil prices are bad for everyone concerned, sellers and buyers alike.

Considering that the oil price dropped—oscillating between the low $40.00s to $50.00s—for much of the economic recovery (not the financial one) that started around 2014, an oil price of about $60.00 per barrel could keep everyone happy.

Moreover, as the economy adjusts to the end of the low interest regime of quantitative easing in the U.S. and Europe, higher energy costs will be difficult to digest.

The Risk of Inflation

Interest rates are going up because of the Federal Reserve and central bank policies in just about all G7 countries.

Economists say the reason that interest should increase is because, in a climate of (alleged) economic growth, inflation increases along with salaries and spending power. Higher oil prices, however, contribute to pushing the cost of everything higher, interfering with the purpose of interest rates.

The risk is that the economy prices itself out of growth, moving into a slowdown or a recession. And the risk of a recession has become higher in the United States than in Europe or Japan because inflation estimates have been higher.

At the very least, the trend toward $80.00 per barrel oil should cause the Fed to reconsider its interest rate plans. And that changes everything. Should that happen, expect to see a sharp rise in the gold price at the expense of the equity markets.

The Fed wants to keep inflation at two percent. Many economists think that’s an ideal level for a healthy economy. Yet, if oil keeps costing more, then the Fed would have to start trying to compensate for an inflation rate moving closer to three or even four percent.

At that point, considering the stock markets have been operating well beyond the point of normal in 2018, nothing will stop stocks from sliding.

And higher-than-planned inflation won’t do many favors for U.S. Treasuries either—or bonds, for that matter. Thus, investors will lose at every turn, whether in stocks or bonds.

Oh, and did I mention what higher interest rates will mean for those who invested on margin— i.e. those who borrowed to invest?

There’s little that individuals can do about oil prices. President Trump does have some influence with the Saudis. After all, he’s agreed to sell them all kinds of weapons and has supported their war in Yemen.

Nevertheless, the Saudis themselves may have lost control. After all, it has become ever harder and more expensive to extract oil in the kingdom. Moreover, Trump’s policy of blocking international sales of Iranian oil has also contributed to lifting prices.

Perhaps that’s why Trump has suddenly opened the possibility of talks with Iran’s President Hassan Rouhani. Trump may have realized that this about the higher oil price. It could have an effect similar to that of real estate and interest rates in 2008.

It was the higher interest rates that caused the housing market to blow up. This exposed the frailty of the subprime crisis and triggered the biggest recession since the Great Depression.

The oil price will expose the weakness of the current “recovery.”