https://www.lombardiletter.com/odds-u-s-dollar-collapse-overnight/34453/ Odds of U.S. Dollar Collapsing Overnight? Commonsense Facts You Should Know Moe Zulfiqar, B.Comm. Lombardi Letter 2023-01-13T11:47:21Z 2023-01-13 11:47:21 US dollar greenback dollar index dollar collapse American dollar US economy While the fundamentals of the U.S. dollar are tormented, but it shouldn’t be forgetting that dollar collapse rhetoric in the near term could be premature. There’s significant reliance on the U.S. dollar globally and it could take years before the U.S. dollar losses its reserve status. Analysis & Predictions,U.S. Dollar https://www.lombardiletter.com/wp-content/uploads/2023/01/thousands-of-dollars-with-reflection-of-american-f-2022-10-17-01-16-43-utc-150x150.jpg

Throughout 2020 and 2021, as assets like cryptocurrencies were gaining popularity, there was a significant amount of noise about how the U.S. dollar could collapse and other assets could replace it. There were suggestions it could happen at any moment. In early 2022, with the Ukraine-Russia conflict, the dollar-collapse debate resurfaced. Fast-forward to later in 2022 and we saw quite the opposite: the greenback soared compared to other major currencies.

Does the argument of a U.S. dollar collapse still have merit? Yes, but it’s premature to think it could happen overnight. There are even some factors at play that could send the dollar higher in the near term.

Before going into details, take a look at the chart below. It plots the U.S. dollar index, which tracks the performance of the greenback compared to other major currencies throughout 2022.

Last year, the dollar increased by more than eight percent relative to other major currencies. At one point around October, the U.S. dollar index was up by close to 20%—a huge increase, given the historical perspective. Usually, the greenback doesn’t increase that much in such a short time. 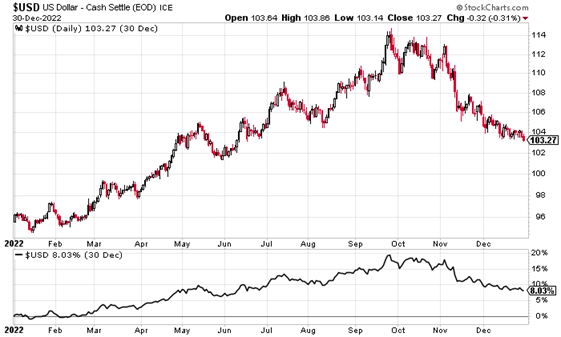 Things to Consider Before Buying Into Overnight Dollar-Collapse Argument

The U.S. dollar is the heartbeat of the global economy. If you removed the American dollar from the global economy overnight, it would have inconceivable consequences—not just in the U.S., but around the globe.

A significant amount of global trade happens in U.S.-dollar terms. In terms of global trade volume, no other currency even comes close. Furthermore, several commodities are priced in American dollars, which makes the greenback even more compelling.

Beyond that, central banks around the world hold many U.S. dollars in their reserves. They hold these dollars to support their respective economies, diversify their reserves, and protect their own currencies from wild fluctuations.

Most importantly, an immense amount of global debt is issued in American dollars. Those who owe these debts have to pay the interest in dollars, which creates constant demand for the greenback.

Keeping all this in mind, the U.S. dollar could be considered a giant elephant. It certainly seems there are movements to reduce the dollar’s dominance globally, but doing that would require a significant amount of effort, and it’s hard to see that happening overnight. Right now, the world is addicted to the American dollar, and no other currency comes close to being as popular.

If you want to see some signs of how addicted the world is to the U.S. dollar, take a look at what’s been happening in emerging economies. Since the dollar increased in value in 2022, emerging economies have been scrambling to get greenbacks. Their own currencies have tumbled, and countries have been facing significant economic headwinds. For some reference, look into at what’s been happening in Egypt, Indonesia, Pakistan, Sri Lanka, and other countries with similar economic levels.

Dear reader, the current dominance of the American dollar shouldn’t make you complacent. The fundamentals of the dollar are deteriorating.

Keep in mind that fiat currencies aren’t valued based on the assets backing them. They’re valued based on factors like a country’s economic performance, the usage of its currency globally, the political environment, and the country’s level of government debt.

The U.S. economy is facing significant headwinds: the country’s long-term economic growth rate has dropped, there’s a significant amount of economic disparity, the national debt has soared significantly, the political environment is fragile, and the list goes on.

Beyond all this, it’s becoming clear that the world economy is becoming bipolar and the U.S. dollar’s dominance is being challenged, with countries like China making trade deals in their own currencies, several countries reducing their reliance on American dollars, and central banks quietly loading up on gold.

I think, in the long term, the U.S. dollar’s reserve status will be challenged. It’s not a matter of if, but when. As this happens, some financial protection, such as that provided by assets like gold, could be needed. People who don’t have the right protection could see their wealth disappear and their buying power collapse.