Massive China Credit Bubble Is a Big Threat to the U.S. Economy

The China credit bubble, is by all accounts, massive. Some believe it’s the biggest sovereign credit bubble the world has ever known. But have you thought about what will happen to the U.S. economy when it pops? I have, it’s hardly reassuring.

According to hedge fund legend Kyle Bass of Hayman Capital Management, L.P., the Chinese financial system has about $40.0 trillion in credit backed by only $2.0 trillion of equity—plus about $1.0 trillion of liquid reserves. The approximate-$3.0 trillion in reserves is the bare minimum of reserve adequacy, as defined by the International Monetary Fund (IMF). (Source: “Kyle Bass: China’s $40 Trillion Banking System Has “Largest Imbalances I’ve Ever Seen,” Zero Hedge, September 17, 2017).

To put this in context, the United States has around $17.0 trillion on its balance sheet, and perhaps another $5.0 trillion off-balance. This is a big contrast to China’s numbers, especially considering that the U.S. and Chinese economies are roughly the same size. In other words, the China credit bubble is massive, about four times the size of America’s, which makes it quite possibly the biggest the world has ever known.

How has China responded to this fiscal insanity? They’ve piled on more debt, of course. They’ve acted this way for a number of complicated reasons. Foremost, the Chinese Communist Party government seeks stability above all. That’s why they’ve targeted a minimum economic growth rate for decades (most recently, it was 6.5%), allowing provincial governments to do whatever it takes to meet those objectives.

Need more evidence? In 2015, it was reported that China used more cement in 2011–2013 than the United States used in the entire 20th century. That’s not a typo. It’s not even clear to me how they could mobilize enough workers to build that quickly. But they did.

Obviously, a credit bubble this big cannot continue. China can’t carry on reconstructing two-year-old buildings and building ghost cities ad infinitum. The piper is going to have to be paid, as China is already leveraged about as much it can be. Remember, it has $40.0 trillion in credit versus $3.0 trillion in equity—let that sink in. 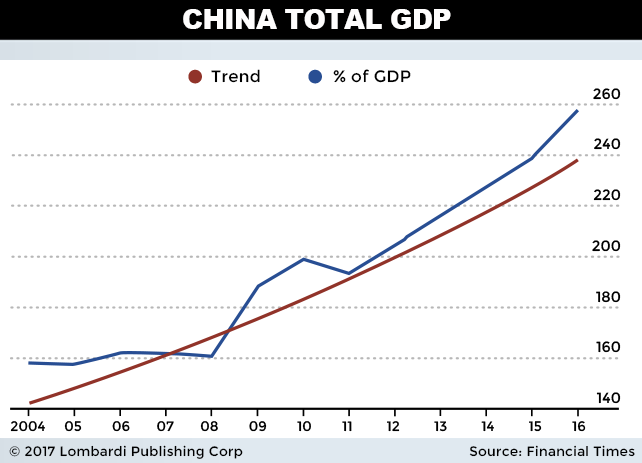 We know the end is relatively near because China has resorted to extreme controls to prevent capital flight. It’s the main reason Bitcoin exploded in popularity when China hosted most of the world’s cryptocurrency exchanges.

These capital controls even extend to big corporations. Lured by China’s massive consumer market, American companies have learned that they can make lots of money in China, but they can’t repatriate the profits. The government has erected barriers that essentially trap the money within China. Only nations that are worried about a negative financial domino effect would institute such measures.

So, what happens to the U.S. economy when the inevitable Chinese credit crunch takes hold? American exports to China will suffer (stronger dollar versus yuan), China will probably accelerate U.S. Treasury sales (bearish for interest rates), and the base metal commodity complex will crash.

All told, if China loses control, that will easily be enough to push the U.S. into recession. America will probably get there within two years, regardless. Recession means endgame for the valuation bubble in U.S. equities. A recession will also uncover some ugly warts, like the huge U.S. pension crisis that’s (mostly) flying under the radar.

Perhaps we can give China a break. After all, this is their first foray into capitalism. They simply didn’t know how to moderate themselves, by design or otherwise.