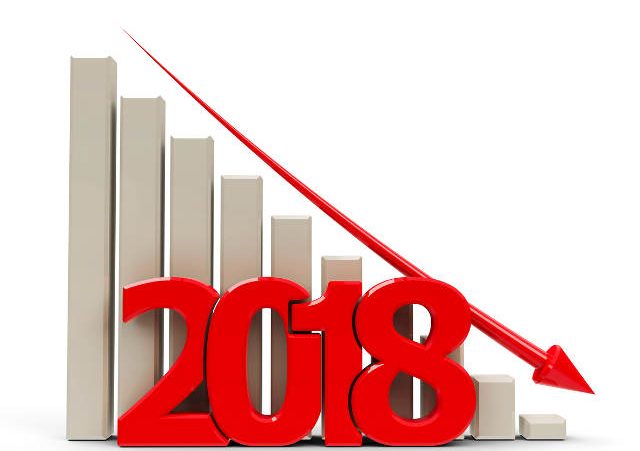 Is a Stock Market Correction Due in 2018?

Let’s assume you have friends who want to invest in the equity markets. They’re impressed by the successive record highs that the Dow Jones and the NASDAQ have been establishing on an almost-daily basis. They don’t understand cryptocurrencies, nor do they want to play the safer but more “hold” game of gold and silver.

It’s either stocks or nothing for these tough customers. How do you advise them? Your reputation and friendships are at stake, after all.

Do you tell them to wait, warning them that a stock market correction’s coming? Or do you tell them to buy up whatever they can find, lest they miss out? It’s a dilemma worthy of Hamlet. But, just as in the Shakespearean play, something is rotten—not in Denmark, but on Wall Street. Then there’s the problem that many ignore whenever the prospect of a U.S. market correction materializes. Typically, some form of bad news sparks a correction.

The only thing that was capable of shaking investor confidence in 2017, prompting pundits to discuss market correction predictions, was North Korea. Kim Jong-un’s missile tests were the only medicine strong enough to force investors into returning to reality.

However, those waiting for such bad news rarely have the risk appetite to get in the market just as it’s in a spur. Inexperienced swimmers don’t jump in the sea when it’s rough. They wait for calm waters to return to Wall Street. Of course, by the time that happens, investors will lose the opportunity. They will have to sit wondering, is the market correction over?

The Next Stock Market Correction

Rumors suggest that the U.S. may bomb North Korean nuclear sites pre-emptively, regardless of whether North and South Korea match as one at the PyeongChang Olympics. They would not be ordinary strikes. President Donald Trump could authorize a nuclear strike, no less. A fleet of “B-2” stealth bombers are already on South Korean ground, awaiting further instructions.

The U.S. Air Force could use the “B61” thermonuclear gravity bomb. It’s a so-called tactical nuclear bomb, designed to reach underground targets, which it must do in order to destroy North Korea’s rumored nuclear arsenal. Whatever the capability, should Trump authorize the deployment of even a small atomic weapon, it would cause global panic and outrage. (Source: “US May Be Preparing Preemptive Strike Against North Korean Nuclear Sites,” Sputnik, January 24, 2018.)

China and Russia would not take a U.S. nuclear strike—even if tactical—easily. The repercussions would be global, and would expose all the many underlying risks. The markets would be left defenseless. North Korea—or, for that matter, China and others—might react to such an attack, looking for vulnerabilities in cybersecurity and aiming directly for the heart of what makes America move: the markets. It would be the best way to respond, given that any military response would be met by total annihilation.

But North Korea and the Pacific Basin are merely one component of the deterioration of geopolitics, which appears to have intensified since the start of the new year. Geopolitics has returned in grand fashion as a key risk, and that’s why it hangs such a long shadow over the U.S. economic outlook for 2018.

The fact that leaders from all over the world have cited geopolitics as one of the biggest risks for the future at the World Economic Forum in Davos, Switzerland points to where many expect a U.S. stock market correction to begin. As the word itself implies, geopolitics rules the game for the whole world. What happens in the United States certainly affects what happens in the rest of the world.

Many Americans who are invested in Wall Street have become too complacent. They’ve let down their guards. They’ve become indifferent (or blind) before the tide of uncertainty that’s about to hit Manhattan.

Thus, the market could blow out the significant gains of the past year. All of it could go up in smoke in a matter of days or hours, depending on how the market correction wave hits. December 2017 was especially bullish, but it’s not unusual for the markets to close the year in the black. Ever since 1987, the markets have responded to the accelerated consumption that precedes the Christmas period. It’s the very backbone of the U.S. markets.

In 2017, the initial consumption data was favorable, and it may have distorted the sentiment over the U.S economic outlook for 2018. Indeed, since 1987, the Dow Jones, S&P 500, NASDAQ, and all other indices grew on average by 1.8%.

It’s an entirely psychological effect, whose roots are to be found in the same place where people get the idea that they have to celebrate the coming of the new year. It’s a natural reaction of hope and optimism. Of course, not all years are good. Imagine the look in the faces of those who celebrated New Year’s Eve 1928/1929 or 2007/2008.

The heavy geopolitical risk in 2018 could be the spoiler that sparks the next stock market correction. Add to that the unknown factors that could result from Trump’s fiscal reform. It’s all about inflation, they say, given the expected boost to economic growth that tax cuts are supposed to bring.

But the Federal Reserve has to play a difficult balancing act. If the Fed acts preemptively, raising interest rates, it risks bringing everything to a halt, prompting a correction. If it waits too long, it risks turning that correction into a crash, because investors will have continued to take risks. The higher interest rates will not only affect the markets, but the real economy as well. Companies will be more reluctant to invest in growth, and will instead pocket the tax savings to boost their earnings and save their stock valuations.

With all this in mind, a recession seems more than likely in 2018.