Investors Beware: This Indicator Says a Stock Market Crash Is Likely Ahead

Why a Stock Market Crash Could Be Ahead

Currently, key stock indices are making big moves to the upside. They are flirting with their all-time highs. But could there be a stock market crash?

Before going into any details, just look at the chart below. It plots the S&P 500.

In late 2018, we saw a stock market crash-like scenario play out. S&P 500 dropped nearly 20% from its highs. Since the beginning of 2019, it has recovered from the lows. It’s back to where it was in late September 2018. It’s like nothing happened.

Don’t Get Too Complacent

Here’s the thing; the price action on key stock indices may give investors the idea that everything is back to normal. It can’t be stressed enough; don’t get complacent. The upside may be very limited while the downside could be huge.

Remember. always focus on the big picture rather than getting bogged down in the short term.

You see, the stock market soars as earnings get better.

We are currently seeing troubling data out of the U.S. economy. It is becoming very evident that a slowdown could be ahead.

For instance, look at the yield curve. It is hands down one of the most powerful indicators for the U.S. economy. It has predicted the last two recessions precisely. And it’s warning us again.

Look at the chart below. It plots the yield curve. 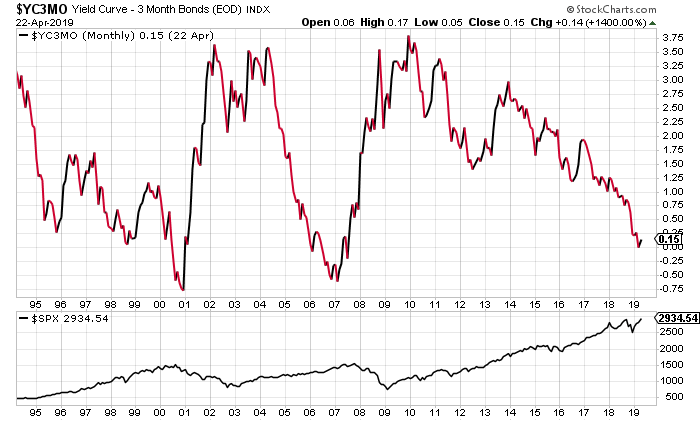 In 2001 and 2007, the yield curve dropped below zero. A recession followed a few quarters later.

What do you think will happen if a recession follows now? Companies will have a hard time showing solid earnings and their stock price could suffer.

See something interesting there? Look closely.

In 2000, as soon as the yield curve crossed zero, we saw a major top form on the S&P 500. A stock market crash followed a few months after.

Something similar happened just before 2007. A major top started to develop as the yield curve was reaching negative territory.

Right now, the yield curve is near zero. In fact, a few weeks ago, it turned negative. The trend suggests it could get worse. So one has to wonder if we are really seeing a major top form on the key stock indices.

If we are in the midst of building a major top, then a stock market crash could be just ahead.

I will end with this: It’s time to pause and reflect. Long-term investors take note; stock markets have been good over the past few years. The next few years may not be as good. A stock market crash happening sooner than later seems a real possibility. Be careful, not complacent.