https://www.lombardiletter.com/investors-beware-bond-market-uncertainty/33852/ Investors Beware: Bond Market Could Bring Shock Waves of Uncertainty in 2022 Moe Zulfiqar, B.Comm. Lombardi Letter 2021-12-09T09:20:21Z 2021-12-09 10:30:44 bond market stock market bonds inflation US economy Going into 2022, it's important that investors pay close attention to the bond market. There are problems brewing, and they could cause shock waves for other assets. Here’s what investors need to know. Analysis & Predictions,News https://www.lombardiletter.com/wp-content/uploads/2021/12/bond-bonds-debenture-stocks-stock-concept-business-bank-banking-bill-blocks-cash-coins-currency-debt_t20_1Qgy6n-150x150.jpg

For long-term investors, it’s important to assess risks on an ongoing basis. If investors know the risks, they can act accordingly and not be caught by surprise.

With this in mind, investors should pay close attention to the bond market. There are problems brewing. Given the size and impact of the bond market, there could be ripple effects across many assets. Investment portfolios could be hurt badly.

Why care about the bond market at all?

As Inflations Soars, Will Bond Values Be Fine?

Now, digging into the details…

The bond market has one big enemy: inflation. When inflation soars, the bond market drops. This is mainly because, in times of inflation, central banks tend to raise their interest rates to fight it. This causes bond prices to decline.

How’s inflation looking at the moment? It’s getting worse, according to all measures—official and unofficial.

Now, take a look at the chart below. It plots the yields of 10-year U.S. Treasuries. 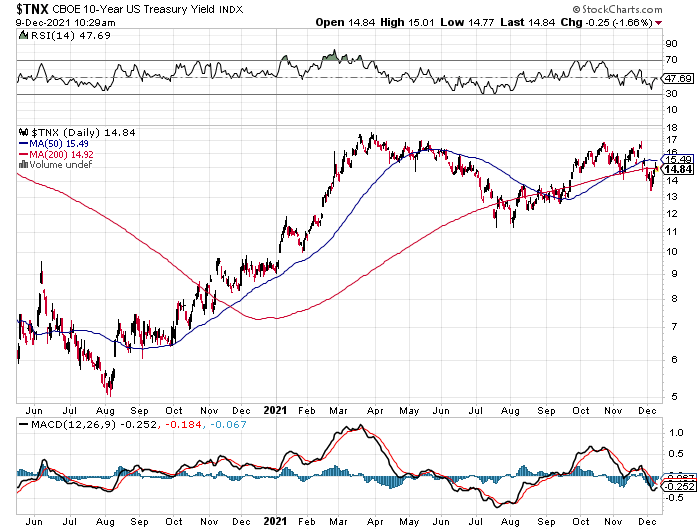 Coming back to inflation, it’s likely that inflation will run much higher in 2022—at least in the first few quarters of the year. This is mainly because supply chain issues persist. Plus, there’s the recent emergence of a new COVID-19 variant, which could result in more economic restrictions. And that could make the global supply chain problems even worse.

Here’s the big question: If inflation surges in the coming months, will the Federal Reserve do anything?

Why a Shock in Bonds Could Cause Crashes Elsewhere

Dear reader, my goal isn’t to scare you. Rather, it’s to provide you with insights and analysis that you might not see in the mainstream financial media.

Inflation surging, the bond market being spooked, and the chance of the Federal Reserve raising interest rates in 2022 creates the possibility of a shock in the bond market. I’m talking about yields on 10-year U.S. treasuries jumping by more than 2.5%.

Don’t forget that everyone gets impacted by what happens in the bond market. We could see the stock market drop, home prices plunge, consumer spending get hurt, and the U.S. economy face a slowdown.

As such, you won’t want to ignore what happens with bonds. The bond market could be the place that creates the next wave of troubles for the financial world.