Investing in Blockchain: How to Profit from the Rise of Blockchain Technology

Home » Cryptocurrencies » Bitcoin » Investing in Blockchain: How to Profit from the Rise of Blockchain Technology

With the price of popular blockchain currencies rising astronomically, investors are increasingly wondering how they can profit from the blockchain technology rise. Although investment options are more limited compared to traditional financial products, an attractive menu of options exists that makes investing in blockchain easy. We’ll attempt to flesh out the pros and cons of equities versus the currency itself, so that investors can make a more informed investment decision. The train has left the station, but there’s still plenty of appreciation left for those with intermediate to long-term time horizons.

First and foremost, why are people investing in blockchain? In a word, potential. You’ve probably read about all the great capabilities blockchain technology provides beyond making the ideal currency—most of it true. Use cases are springing up everywhere. It’s being tested in everything from derivatives clearing to settling legal contracts between counterparties. Distributed ledger technology can allow for the secure transfer of any asset, both physical and digital, across any business network. Blockchain technology applications are seemingly endless, and financial institutions are attempting to harness its powers to streamline business and boost profits.

Many people are actually comparing the state of blockchain technology to the early days of the Internet, before killer applications like web browsers and e-mail were introduced. Many similar parallels exist, especially regarding the potential to transform commerce altogether. If you’ve bought into Bitcoin’s or Ethereum’s transformative potential, you might think that investing in blockchain now could be the last “cheap” opportunity to invest before the train really leaves the station.

But hasn’t Bitcoin been seeing triple-digit annual returns trading for most of the last decade? That doesn’t sound cheap. That is true, if looked at on a nominal basis. But taken in overall context, if Bitcoin only achieves a quarter of what experts think can happen, it’s still uber-cheap. Bitcoin’s entire currency valuation is only around $22.0 billion, which is peanuts in the greater scheme of world finance preeminence. It’s akin to thinking that Microsoft Corporation (NASDAQ:MSFT) was expensive in the early days at $10.00/share just because it had risen 12-fold the year before. It’s not how far price has come, so much as how far it can travel.

Say you’ve bought into the story and you’re ready to dabble in cryptocurrency ownership. What next? While investors don’t have the ability to purchase an ETF or deposit some into a checking account, some attractive options exists. I’ll give the rundown on what I think are some of the best non-currency options available.

Practically speaking, blockchain stock investing can be separated into two distinct categories: large-cap innovators and smaller-cap niche players. Both are trailblazing within the sector, but the difference comes down to size, budget, and project scope.

For example, International Business Machines Corp. (NYSE:IBM) is heavily involved in the development of blockchain technologies. It has recently developed a platform named “IBM Blockchain,” which will enable customers to build such applications in IBM’s cloud network. The company’s top brass truly believe in blockchain’s metamorphic qualities, and have staked huge development budgets into seeing it through. Says CEO Ginni Rometty, “Blockchain will do for trusted transactions what the Internet did for information. IBM is already working with more than 400 clients to pioneer blockchain for business.” (Source: “IBM Chairman’s Letter,” IBM Annual Reports, 2016.)

Another large-cap stock to consider is Nasdaq Inc (NASDAQ:NDAQ). The world’s second-largest stock exchange has been investing heavily in blockchain technology applications, and the results are paying off. Nasdaq’s “Linq“ was developed by in-house technologists and debuted in May 2015. Other successes have since followed.

With research showing the cost of clearing, settling, and managing post-trade processes for securities ranging between $65.0 billion and $80.0 billion annually, it’s little wonder why Nasdaq is diving in head-first. The vast cost savings potential from back office operations is huge, and could be the main driver for earnings growth since exchange volumes are flat. Other world exchanges like the Japan Stock Exchange are following suit, seeking similar benefits. (Source: “Nasdaq Linq claims to have issued first securities over a blockchain,” BraveNewCoin, January 1, 2016.)

For reward-centric investors wishing to take a more speculative position, there’s a plethora of blockchain companies around. However, it’s definitely a “Buyer Beware” market; not dissimilar from the early days of NASDAQ’s Internet stock craze. Many of these companies are listed on the Wild West of exchanges: Over The Counter (OTC) or Pink Sheets-listed. In many cases, revenues are pipe dreams and there’s little more than a business plan behind the concept. Scary stuff for the faint of heart.

Obviously, the risk of failure is high, but so are the rewards. Needless to say, these are not recommendations. Lots of individual investor due diligence is needed, but listed below are a couple of micro blockchain stocks 2017 which have caught our eye. 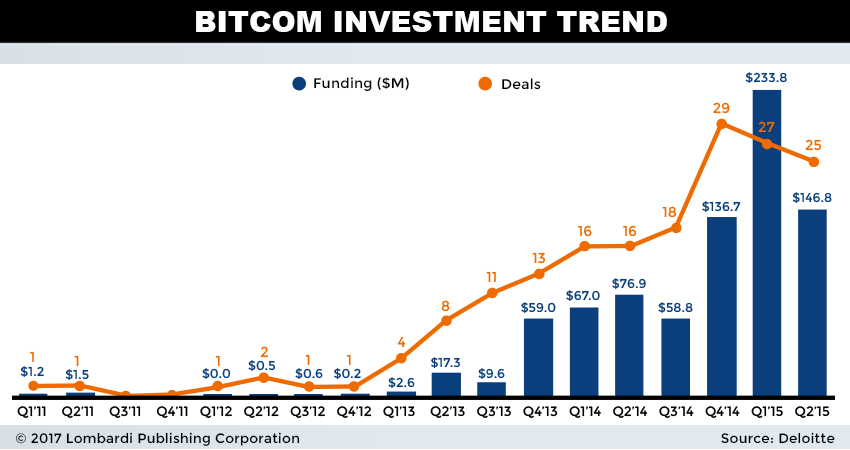 BTL Group is a Vancouver-based company that offers blockchain solutions across multiple industries–from banks to fantasy sports. It has developed a money transfer platform using distributed ledger technology and smart contracts. Its “Interbit” solution is an open asset settlement platform with a suite of APIs and smart contracts that allow entrepreneurs to provide global access to financial and asset trading services. BTL Group is positioning itself as a front-runner in the blockchain ecosystem, both in designing and consulting in blockchain systems solutions.

Revenue is on the upswing as well. On November 30, 2016, the company announced it had “booked its first revenue…resulting from a ground breaking fintech pilot project.” Although mostly a symbolic “milestone” achievement, it’s nonetheless an important step all speculative companies must take. (Source: “BTL GROUP ANNOUNCES FIRST SIGNIFICANT REVENUE AND COMPLETION OF WARRANT EXERCISE INCENTIVE PROGRAM,” BTL Group, November 30, 2016.)

It has also added some firepower to the Board of Directors team. Jon Downing, formerly a key member of Visa Inc‘s (NYSE:V) Europe’s Innovation Hub, Visa Collab, has joined the ranks. Jon was formerly responsible for testing the most advanced ideas in payments and developing them into commercial realities. For such a speculative company, a talent acquisition of this nature is a big deal.

It would appear the market agrees. Since March 13, 2017, when Downing was named to the Board, the stock has rallied 55.43%, and 264.75% overall in 2017 alone. BTL Group’s price may have jumped ahead of itself, but momentum is a powerful thing. This stock may be worth watching as demand for blockchain technical solutions soars in the coming months.

FIRST BITCOIN CAP COM NPV is in the business of acquiring Bitcoin start-ups, raise funding, and investing in blockchain companies that are developing Bitcoin software or hardware applications. Whether it’s acquiring miners or research & development labs, its mission statement is to vertically consolidate every segment of the digital currency arena in order to help the digital currency industry grow.

There’s no word on financials, so investors must use extreme caution here. It’s the ultimate risky endeavor to invest in something so unproven without stringent filing requirements (non-transparent). But the business model is interesting enough to warrant a second look for those intending to put speculative capital on the line.

Ultimately, the aim here is to highlight that the secondary exchange landscape is dotted with risky blockchain startups that aren’t for the faint of heart. The vast majority will fail, so please take note. However, it’s also likely that the few that do succeed could appreciate in a very meaningful way if blockchain reaches only a quarter of its potential. The two stocks mentioned above stand as good a chance as any in the micro-cap space.

Lastly, there could soon be a direct and cost-effective way to invest in Bitcoin without having to resort to risky micro-caps and small cryptocurrency exchanges themselves. It’s in the hands of government regulators, but it’s getting closer to materializing.

The Winkevoss Bitcoin Exchange Traded Fund (ETF) could soon trade on a major exchange. The Securities And Exchange Commission (SEC) intends to review its decision to reject the Bitcoin exchange-traded fund proposed by investors Cameron and Tyler Winklevoss. The SEC declined to accept the listing in March 2017 because it deemed that traded Bitcoins are not regulated, and therefore susceptible to fraud and other manipulation. The ETF would seek to track the price of Bitcoin, minus exchange fees.

It’s only a matter of time before an exchange listing is inevitable. With millions of Americans possessing online trading accounts, investing in a blockchain ETF could become the catalyst needed to irrevocably move both cryptocurrencies into the mainstream consciousness, forever.

How Rise of Blockchain Will Change Things

The experts agree: the rise of blockchain will affect commerce in a profound way. Not simply through its effect as a currency, but its ability to shape and streamline other areas of business. Corporations that rely on voluminous amounts of information, payments processing, and back office clearing will benefit the most. But ultimately, we all benefit from the reduced costs of goods and efficiency blockchain technology can bring to our daily lives. Investing in blockchain is exciting, and it’s bursting through in a meaningful way right now.

So put away the price chart on this one. Bitcoin and Ethereum have already demonstrated large moves upwards, but there’s still time for investors with a medium- to long-term time horizon to profit handsomely. It’s all about understanding that most of the future is still ahead, and it’s here to stay.