https://www.lombardiletter.com/interest-rates-about-go-higher/33977/ Interest Rates About to Go Higher & Bank Stocks Underperform: A Crisis Looming? Moe Zulfiqar, B.Comm. Lombardi Letter 2022-03-11T07:30:20Z 2022-03-11 03:38:29 interest rates stocks stock market bank stocks investing According to basic economic wisdom, as interest rates increase, bank stocks should do well. However, this isn't the case right now. It could be a hint that the financial system is currently under stress and that bigger problems could follow. Analysis & Predictions,Stock Market https://www.lombardiletter.com/wp-content/uploads/2022/03/interest-rates-on-white-box-with-yellow-background_t20_QJyX3m-150x150.jpg

Basic investing wisdom says that, as interest rates go higher, the profitability at financial firms will skyrocket. Therefore, one investment strategy is to buy bank stocks and other finance-industry stocks when rates are going higher. As it stands, this strategy isn’t working, and one has to ask if this is a trailer of something worse on the way.

The U.S. Federal Reserve is expected to raise its interest rate at its March meeting. There are expectations that the Fed could make seven to eight rate hikes in 2022 alone!

The European Central Bank (ECB), the central bank with one of the easiest monetary policies, is stepping back a little. The ECB recently said it will be reducing its bond purchases (money-printing) in the coming months. It also changed its rhetoric on interest rates a bit, an unexpected move. (Source: “ECB Surprises With Faster Stimulus Exit on Risk to Inflation,” BNN Bloomberg, March 10, 2022.)

With all this, one would assume that bank stocks would be doing really well. This is just not true.

Look at JPMorgan Chase & Co (NYSE:JPM), the biggest bank in the U.S. by assets. Its profitability has been great recently, and the business is in great shape. However, its stock price isn’t doing very well. Contrary to popular wisdom, JPM stock has dropped by more than 16% year-to-date. 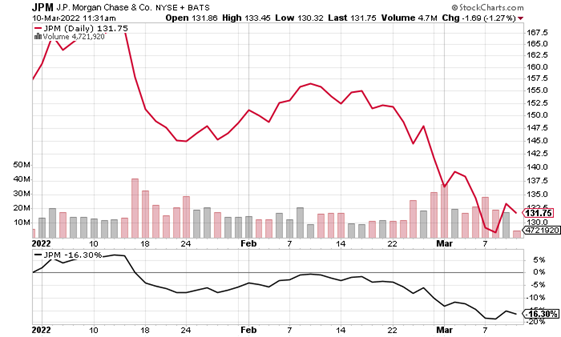 A few of the biggest banks in Europe have seen their stock prices take an almost-nosedive in 2022. For instance, shares of Deutsche Bank AG (NYSE:DB), a German bank, are down by 15% year-to-date.

Also consider the iShares Global Financials ETF (NYSEARCA:IXG). This exchange-traded fund tracks the performance of global banks, investment funds, and insurance companies. In other words, it gives us an overview of how global financial stocks are looking. Year-to-date, this ETF is down by close to seven percent. 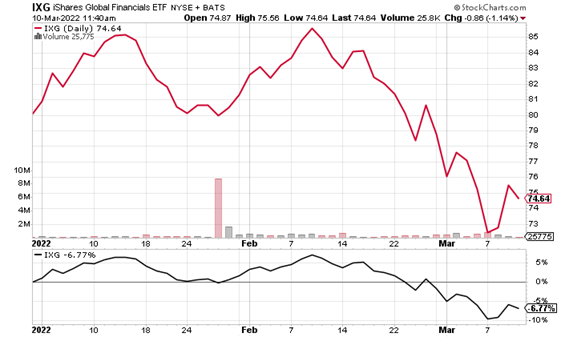 Financial System Under Stress? Crisis Could Be Just Around the Corner

To say the least, the recent poor performance of bank stocks and other financial stocks is worrisome. Dear reader, I keep saying this over and over again: I don’t want to be the bearer of bad news. I’m not rooting for a financial crisis or an economic collapse. All I’m trying to do is point out risks that could hurt investment portfolios.

I believe that the dismal performance of bank stocks is essentially a sign that there could be stress building up in the global financial system. Investors are realizing it and ditching these stocks. There are several reasons for it: the Russia-Ukraine war, commodity prices becoming extremely volatile, and economic data that isn’t getting stronger.

The longer the stress builds, the bigger the problems could be. The war between Russia and Ukraine, and the related sanctions, could lead to some sort of banking crisis in Europe. Since the financial system is already stressed, could it result in some sort of bank default?

I will end with this: the global financial system is extremely interconnected. If a problem begins at European banks, you can almost bet that it won’t stop there. It could hit the U.S. banks and create even more volatility on the stock market.