https://www.lombardiletter.com/indicator-says-gold-prices-could-surge/34203/ Time to Load Up on Gold? This Indicator Says Gold Prices Could Surge 30% Moe Zulfiqar, B.Comm. Lombardi Letter 2022-07-27T07:30:45Z 2022-07-27 04:02:28 gold prices gold price price of gold yield curve Historically, gold has been a great investment as yield curve inverts. Gold prices may be down so far in 2022, but the yellow precious metal might not remain down for too long. Here's why. Analysis & Predictions,Commodities,Gold https://www.lombardiletter.com/wp-content/uploads/2022/07/gold-bar-and-american-dollars-banknotes-banknotes-are-fanned-out-and-covered-with-a-gold-bar-invest_t20_OgjmgG-150x150.jpg

Home » Commodities » Gold » Time to Load Up on Gold? This Indicator Says Gold Prices Could Surge 30%

Why could the price of gold go lower in the near term? There’s a significant amount of pessimism among investors these days. The stock market has taken a hit and interest rates have gone higher. We could see some sort of “sell everything” event that brings down gold prices further.

Why have a bullish take on gold prices? The lower the price of gold goes, the better the opportunity the precious metal becomes.

There’s one indicator that gold bugs should keep a close watch on: yield curve, which plots the interest rates of bonds.

Historically speaking, if you buy gold when the yield curve inverts and hold that gold for 36 months (three years), you’ll make a solid return. At some point during this period, there will be a wild swing in gold prices, and those who are patient could reap rewards. This has worked like clockwork.

The Last Time Yield Curve Inverted, This Is How Gold Performed

Look at the following chart. It plots the yield curve at the top and plots the price performance of gold and stocks at the bottom. 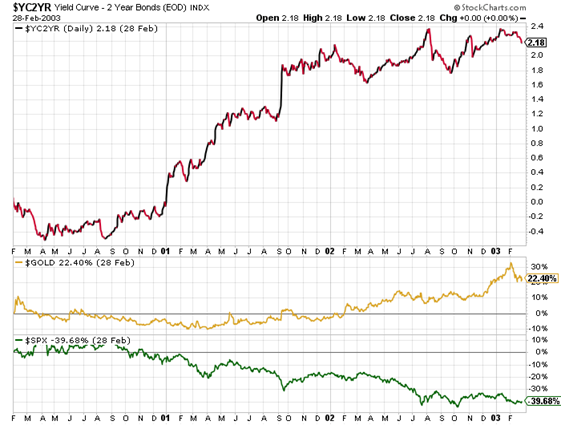 Next, look at the following chart. It plots the yield curve between December 2006, when it inverted, and December 2009. 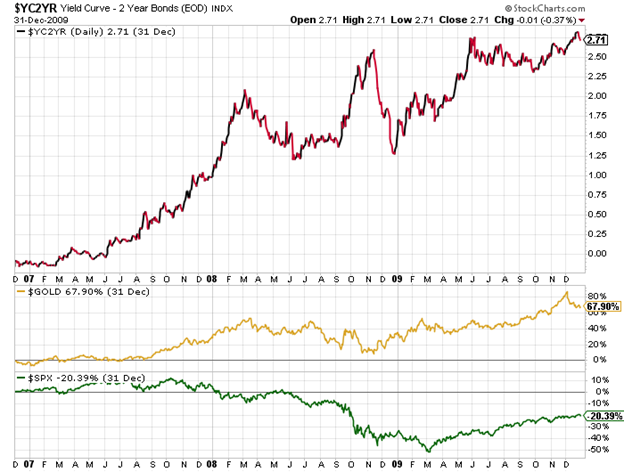 Once again, gold repeated the pattern. After the yield curve inverted, gold prices remained relatively flat for a while but then started to ascend. Three years later, gold was up by close to 70%. In comparison, stocks went down by more than 20% over the same period.

Lastly, look at the following yield curve, gold price, and stock market chart from 2019. For a brief period in 2019, the yield curve dropped to inverted territory. It hasn’t been three years since then yet, but the yield curve has inverted again. 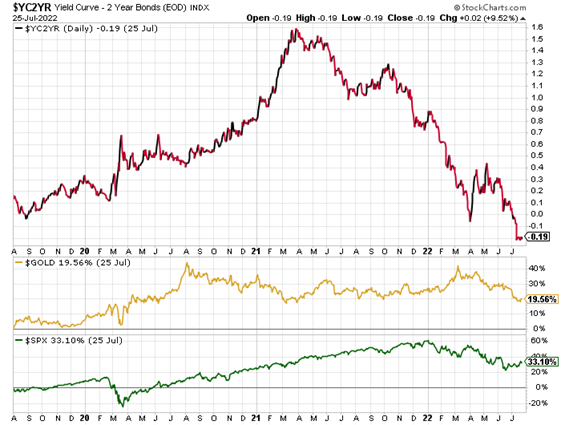 This time around, since the first inversion of the yield curve, gold prices have gone up by 19.6%. The stock market has also done exceptionally well. However, some of the stock market performance could be attributed to reckless money-printing by the Federal Reserve and extremely low interest rates.

Will This Golden Pattern Repeat Itself?

Dear reader, as the yield curve inverts again, I can’t help but be bullish on gold for the coming years.

How high could gold prices go? Remember, initially after the yield curve inverts, the price of the yellow precious metal doesn’t do much or even declines, but three years later, the price tends to be much higher.

If we take the average of the last three times this happened, the price of gold jumped by about 30%. Assuming something like this happens again, we could be looking at gold that’s well above $2,200 per ounce.

I will also say this: if gold prices repeat their pattern, it might not be a bad idea to look at gold mining stocks. They could provide leveraged returns. If the price of gold jumps by 30%, don’t be shocked if some gold mining stocks soar by a few times that.

Over the past few months, as gold prices have been relatively flat, gold mining stocks have plunged in value. Investors have gotten concerned about gold mining companies’ financials, costs, production, and everything else. Once the price of gold starts to move higher, those concerns will diminish very quickly and gold mining stocks could catch a bid. There’s a ton of value there.