The numbers don’t lie. Despite a roaring and insanely overvalued stock market and soaring investor confidence, the underlying message is that the U.S. economy continues to struggle. U.S. homebuilding fell more than expected in November and housing permits plunged. At the same time, U.S. homebuilders remain exceedingly upbeat. There is a serious disconnect here. And I think homebuilders may be a little blinded by the optimism about the Trump presidency.

U.S. homebuilding tanked in November, down an eye-watering 18.7% month-over-month to a seasonally adjusted rate of 1.09-million units. The revised October estimate came in at 1.34-million starts. On a year-over-year basis, U.S. housing starts fell 6.9%. 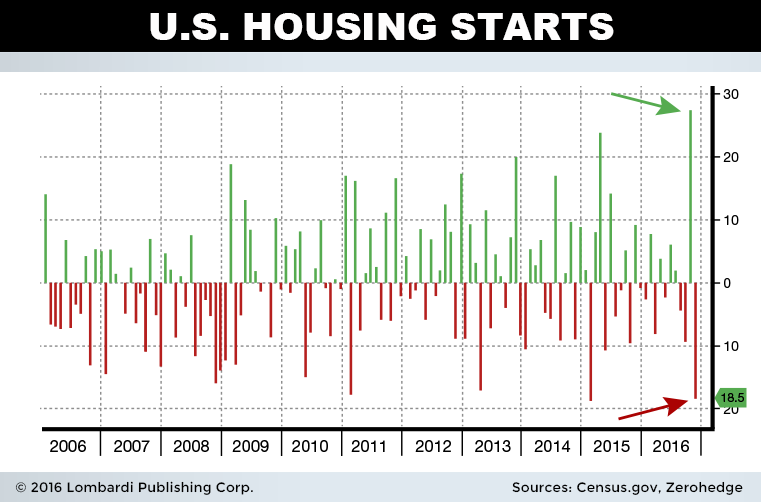 Meanwhile, building permits were also disappointing in November, down 4.7% month-over-month at a seasonally adjusted rate of 1.2-million units and down 6.6% year-over-year.

The underwhelming U.S. housing data comes a day after the National Association of Home Builders’ confidence measure climbed in December to the highest level in more than 11 years. The Housing Market Index (HMI) home builder sentiment came in at 70 out of 100; 50 is the line between positive and negative sentiment. (Source: “Housing Market Index (HMI),” National Association of Home Builders, December 15, 2016.)

This represents an 11% increase month-over-month and 16.6% year-over-year. This euphoria about the spring housing market puts the Housing Market Index at its highest level since July 2005, which is right near the peak of the housing bubble.

Homebuilders are quite confident that Donald J. Trump’s reduced regulation and taxes will be a boon for the housing industry. This is important since regulatory costs for homebuilding have increased by 29% over the last five years.

The big question is whether President-elect Trump’s tax breaks will trickle down and boost sagging new home sales. If actions speak louder than words, homebuilders may not be quite as bullish in the New Year.

U.S. Housing Has a Huge Impact on GDP

The contribution of housing to U.S. GDP doesn’t include consumer purchases that go hand-in-hand with a new home, including furniture, appliances, renovations, furnishings, etc.

Thanks to subdued housing starts and permits, and increased household debt loads, barely-there wage growth, and a lack of well-paying jobs, the U.S. economy won’t be nearly as robust as many expect. In fact, there is plenty of risk to the downside.

Despite all the optimism, the odds of the U.S. falling back into a technical recession in 2017 is not exactly remote.