The Oil Price Is Sending Us a Global Recession Warning

It wasn’t long ago that everyone complained about the oil price. It was too low, especially for North America, where shale oil needed a high price to justify the higher costs of exploration and extraction.

The whiners got their wish. The oil price is going higher. So high, in fact, that it will collide with growth. Far from improving the world economic outlook, even at its current price, the oil price is too high. It will interfere with the hesitant economic recovery in Europe and drive up consumer prices while wages remain stagnant.

Meanwhile, inflation is also moving higher, which explains why mortgage rates have reached peaks not seen since 2014.

The markets have run for years, seemingly oblivious to geopolitical tensions sprouting up everywhere. But even the most passive observer cannot remain so before the rising global tensions in 2018, which have become the main factor driving the oil price over the past few weeks.

Oil is now approaching $75.00 per barrel. The last time oil prices were anywhere near that was in 2014.

However pointless and ambiguous, the U.S. air strike on Syria over a presumed—but largely discredited—chemical weapons attack in the Damascus suburb of Douma has consolidated the bullish oil price trend.

Meanwhile, the high probability that President Donald Trump will pull the United States out of the Iran “P5+1” nuclear deal and the inevitability of fresh U.S. sanctions against Tehran in May will all but ensure further oil price increases.

Trump has been hinting about this move since the days of his  electoral campaign. He delivered a scathing review of the deal, presenting it as one of President Barack Obama’s worst mistakes. And, as Trump’s largely allegorical strikes against Syria (April 2017 and April 2018) have shown, he has decided to unravel everything his predecessor achieved.

The lifting of sanctions against Iran allowed for that country’s oil to become widely available in the market since the beginning of 2016. And that’s when oil prices started to drop as the Brent oil price chart below shows. 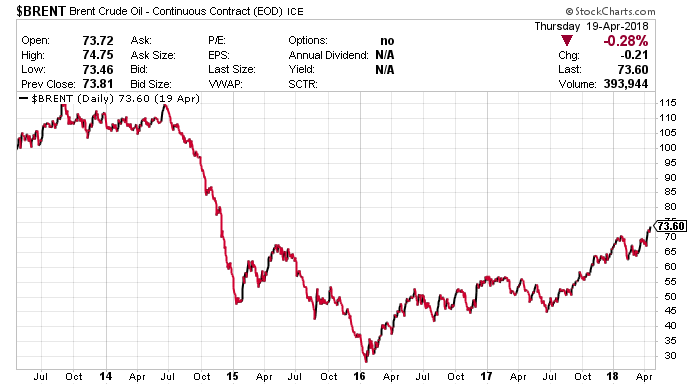 The Islamic Republic of Iran has held up its part of the bargain. It has agreed to cease all research in adapting its nuclear technology for military purposes. International inspectors have monitored this commitment for the past two years.

It matters little. Trump has been listening to other Middle Eastern regional powers—Israel and Saudi Arabia in particular.

The Republican-dominated Congress, just as it did in the case of recognizing Jerusalem as Israel’s capital in December 2017, will approve terminating the Iran deal. That will effectively deprive the global market of much of Iran’s average 2.1 million barrels a day of crude oil production.

China will not support the move, given that it imports at least 30% of Iran’s total oil production. The European Union (EU) and India each import a quarter of Iran’s oil. In other words, not only will Trump raise global tensions by scrapping the Iran deal, he will have angered America’s North Atlantic Treaty Organization (NATO) allies. It’s no wonder the Europeans have no intention of following Trump on the Iran issue.

Sadly for Brussels, that won’t matter. Washington has mighty leverage when it comes to enforcing international sanctions. The U.S. would sanction any company that imported oil from Iran, regardless of where the company’s headquarters might be. It would also enforce sanctions against any company that offered Iran technical support in extracting and/or refining oil.

Thus, if the Anglo-Dutch-controlled multinational Royal Dutch Shell Plc (ADR) (NYSE:RDS.B) were to continue operating in Iran, it would risk being ousted from the U.S. market. Few would take the risk of testing this rule.

The Oil Price Will Shoot Upward

The sanctions will tighten the noose against Iran. While boasting a more diversified economy than its neighbors, Iran still relies on crude oil exports for most of its gross domestic product (GDP). This will fuel its own internal risk dynamic. Ironically, it would also deprive Iran, a member of the Organization of the Petroleum Exporting Countries (OPEC), of benefiting from the highest oil prices in years.

Moreover, while some believe that the recent oil price hike is temporary, the U.S. resuming sanctions against Iran would add considerable durability to it. Naturally, this would have a long-term impact on the world economy, prompting another recession.

The Saudis, careful about preserving their reserves, would keep production in check, as would their Gulf allies.

And the risks are not only coming from the Middle East. In Venezuela, which has some of the biggest reserves of crude oil anywhere in the world, oil production has plummeted. Thus, from the problem of oversupply that peaked in 2016–2017, the world will have to learn to deal with a shortage, even as demand remains strong.

Russia may take advantage to fill some demand. But Russia itself faces sanctions. Moscow has won the war in Syria. All that’s left for the U.S. to do now is to try to isolate it economically and politically.

That won’t be as easy as isolating Iran. Yet, in a climate of extreme geopolitical tensions, the Russians themselves might be reluctant to increase production in the face of strong demand to drop the price.

If speculation and algorithmic trading do their thing, expect the oil price to shoot upward of $100.00, as it did in 2008.

President Trump has come under pressure to show he’s serious about punishing Russia for its presumed electoral interference. You can thank your Russiagate-peddling media pundits and Congress representatives if your daily commute will cost much more in 2018.

Russia will have to endure more sanctions. This is what has been affecting the aluminum price.

Aluminum Price and Inevitability of Recession

But it’s not just the oil price going up that’s threatening to put a Saudi desert-sized damper on the global economy. Other key commodities, and not precious metals, are also becoming more expensive. The most dramatic of these has been the aluminum price.

Russia’s United Company Rusal Plc (LON:0QD5, HKG:0486), one of the companies that could come under American sanctions fire, is one of the world’s top aluminum producers.

It’s widely known that airplanes use aluminum. But to save fuel and reduce emissions, automobiles are also using aluminum. Electric cars try to compensate for the weight of their batteries with lighter body panels and other components. In other words, demand for aluminum has grown higher than ever.

Sanctions against Russia from the EU or the U.S. will affect the availability of aluminum on two fronts. The sanctions themselves could cut off supply. European companies importing aluminum from Russia could be subjected to the same U.S. sanctions regime as those importing oil from Iran.

Or, the Russians, to retaliate against the unprecedented Western political pressure, could decide to restrict aluminum exports, knowing its ever higher strategic importance.

Either way, the price of aluminum will increase.

Cars, air travel, fuel, and a host of other products will inflate in price while wages remain largely stagnant. And this will cause the bad kind of inflation. The kind that does not improve economic conditions. Rather, it’s the kind that rears its ugly head when the cost of living increases.

That means a recession, especially if the central banks don’t reverse plans to increase interest rates. Without a major foreign policy reversal in Washington, a recession in 2019 or even late 2018 seems inevitable.