https://www.lombardiletter.com/greatest-president-ever-precious-metal-prices/10277/ The Greatest President Ever for Precious Metal Prices? Michael Lombardi, MBA Lombardi Letter 2017-04-19T05:30:18Z 2017-04-20 11:50:13 precious metal prices Trump greatest president silver prices gold prices syria The Trump administration is giving a boost to uncertainty around the world, and this could turn out to be great for precious metal prices. Here’s the full story. Commodities,News https://www.lombardiletter.com/wp-content/uploads/2017/04/iStock-496993957-150x150.jpg

The Greatest President Ever for Precious Metal Prices?

Home » Commodities » The Greatest President Ever for Precious Metal Prices?

Love him or hate him, there’s one thing that President Donald Trump has done since he took over the White House, and that’s create a lot more uncertainty around the world. And this is great for precious metal prices.

Earlier this month, 59 American Tomahawk missiles rained down on a Syrian airbase. Then the “Mother of All Bombs” (MOAB) was dropped on Afghanistan by the United States. It was the largest non-nuclear bomb ever used by the U.S. military. Both of these moves can be described as coming out of nowhere.

The events that have occurred over the past few weeks under the Trump administration are making people around the world question what could be next. That uncertainty is sending investors to gold and silver, pushing precious metal prices higher.

Silver prices are already up over 13% year-to-date.

When looking at the chart below on gold prices, pay close attention to the circled area. 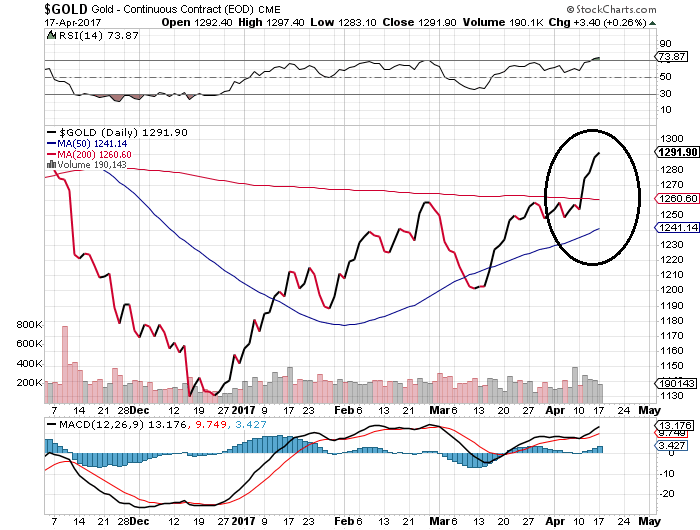 Since the U.S. dropped Tomahawk missiles on Syria, gold prices have made an almost-vertical move to the upside.

Moving to silver, while the Trump administration has proposed spending cuts at many government departments, it has increased its defense spending. Yes, silver is a precious metal that investors often flock to (alongside gold) in times of uncertainty. But silver is also used in the aerospace and defense sectors, so a lot more silver could be needed if the U.S. goes to war again.

Dear reader; so far, the Trump administration has been great for precious metals. As we have seen with Trump, geopolitical uncertainty could escalate within hours, and it takes a long time and lots of effort to reduce the tension once it starts.

Things could get a lot worse geopolitically from here on. All of this would give a boost to precious metal prices. What we’ve seen so far in the precious metals market could be just the tip of the iceberg.

With all this, I’m keeping a close eye on the shares of quality senior and junior mining companies. As precious metal prices soar, investors in mining companies could reap massive rewards.

Gold Prices a Bargain at $1,550; If They Go Lower, It’s a Better Opportunity