Gold Shines as Season of Uncertainty Returns to S&P 500

The much celebrated stock market Trump Bump might be turning into the S&P 500 Trump Speed Bump as uncertainty about the stalling S&P 500 intensifies. This bodes well for gold bulls as we get closer to the dog days of summer. With the Trump administration under intense scrutiny, investors should expect to see gold prices trend steadily higher throughout the summer as the lethargic bull market stalls and experiences a major correction, or corrections.

Gold prices have been bullish in 2017, with bullion up almost nine percent in the first four months of the year. By comparison, the S&P 500 is up 6.5%. Gold prices have been getting a boost from political upheaval in Washington, declines in the U.S. dollar, and ongoing geopolitical tensions. The S&P 500 on the other hand, only really rises during earnings seasons. The first-quarter earnings season is now over, but turmoil in Washington and geopolitical tensions remain.

Currently trading hands at $1,261 per ounce, gold could experience a short-term breakout and move towards $1,275 per ounce and then $1,290 per ounce. The breakout in gold prices could come as the pressure surrounding the Trump administration builds; is Trump facing an impeachable offense?

Meanwhile, the long-suffering bull market and S&P 500 could get cobbled on uncertainty and simmering tensions in Washington. Should President Trump’s administration get bogged down in controversy, the chances of him getting his tax plans enacted seem remote. And with nothing to help boost corporate profits and U.S. gross domestic product (GDP) growth, the S&P 500 and fading Trump Bump could tumble hard in the coming months.

The S&P 500 has been on a fantastic run, soaring 260% since bottoming at 666 in March 2009. Unfortunately, strong earnings and revenue growth did not fuel the bull market. The Federal Reserve’s easy-money policy and bond-buying program were responsible for most of those gains.

For much of last summer, the S&P 500 traded in a pretty tight range. Wall Street was in an earnings recession but investors were more than willing to support the bull market, no matter how tentatively, in the lead-up to the November election.

Once Trump won the election, the S&P 500 broke out and stocks surged considerably higher. Investors were optimistic that President Trump’s proposed tax cuts and stimulus spending could reinvigorate corporate earnings and get U.S. GDP to three percent.

It’s been a different story since the beginning of March, though. Gold prices have resumed their bullish ways while the S&P 500 hasn’t really moved, despite a solid earnings season. This should cause stock market bulls more than a little concern.

For the first quarter, the blended earnings growth rate for the S&P 500 is approximately 14%; this represents the S&P 500’s highest year-over-year growth rate since the third quarter of 2011 (16.7%).

While this sounds great, it’s important to remember that year-over-year data is, like all earnings reports, relative. First-quarter 2017 earnings look solid because a year ago, the S&P 500 was in the midst of the longest earnings recession on record.

Moreover, the solid first-quarter 2017 results are not as rosy as they appear. S&P 500 companies that reported the strongest earnings did so because they didn’t rely on the U.S economy.

Earnings were solid in the first quarter of 2017 but the S&P 500 didn’t exactly respond in kind. Which is a nice change, since the S&P 500 had been experiencing strong growth in spite of weak to moderate earnings growth. Investors are only willing to send stock prices higher because of streamlining and financial engineering for so long.

That said, investors have been happy to do so for years now. That might be coming to an end, though. If it does, what is left to keep the long-in-the-tooth bull market afloat? Of late, the S&P 500 bull market has been a one-trick pony, rising during earnings season and then taking a breather for the next earnings season. 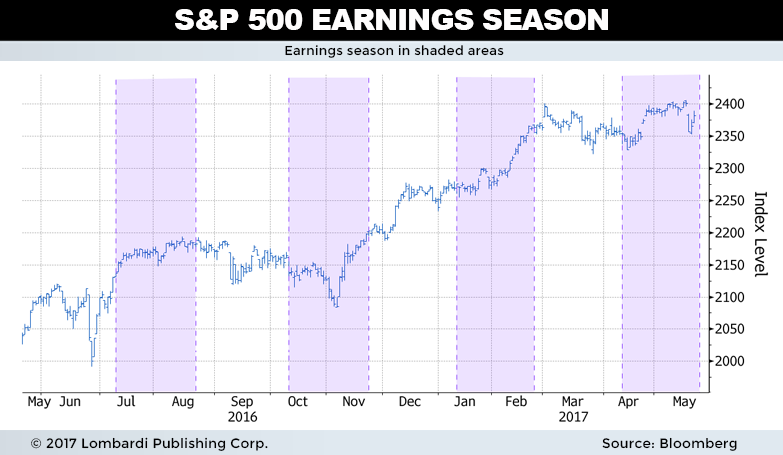 In the absence of strong, sustainable U.S. economic data, the S&P 500 has lumbered along; saved only by earnings seasons. This makes a little sense, what with there being little to no economic data coming out that suggests the U.S. economy is on a sustainable growth path. Optimistic investors are desperate to keep the bull market going, so any sliver of news is good enough. But that is only going to make the upcoming stock market correction or stock market crash that much worse.

The only time stocks broke the earnings seasons trend was in the November to January stretch, but that’s because stocks were enjoying the Trump Bump. That courtesy appears to be over. The S&P 500 increased just 1.4% during the first-quarter earnings season.

It might not be too long for investors to see what the summer of 2017 has in store. Investors have to wait another two months before the second-quarter earnings season starts. At best, it’s going to be a tough, choppy ride. We know this because investors have already gotten a taste of what the next couple of months are going to be like.

On May 17, the S&P 500 experienced its worst sell-off in eight months after it was reported that President Trump asked then-FBI director James Comey to drop the investigation of Michael Flynn, his former national security advisor.

In addition to potential obstruction of justice charges, the Trump administration is facing additional heat after it emerged that Flynn misled Pentagon investigators about his links to Russia.

Failing to report foreign lobbying income and misleading the Pentagon are both felony charges that, if convicted, come with heavy prison sentences. Naturally, Flynn invoked his Fifth Amendment right against self-incrimination.

While most people do not look fondly at those who invoke their Fifth Amendment rights, Trump summed it up nicely last September at a campaign event in Iowa, “The mob takes the Fifth Amendment. If you’re innocent, why are you taking the Fifth Amendment?” Granted, Trump has pleaded the Fifth nearly one hundred times himself. (Source: “Trump blasts those who take the Fifth, but he used it 97 times on adultery questions,” McClatchy DC, September 30, 2016.)

Still, Trump’s opinion of someone pleading the Fifth or taking an immunity deal isn’t too far off Flynn’s own opinion. During an interview in 2016, Flynn said, “When you are given immunity that means you have probably committed a crime.” (Source: “Michael Flynn Full Interview: Trump is Opening ‘Huge’ Lead,” MSNBC, September 25, 2016.)

Moreover, it was reported recently that President Trump asked two intelligence officials back in March to publicly deny that there had been any collusion between the Trump campaign and Russia. (Source: “Trump asked intelligence chiefs to push back against FBI collusion probe after Comey revealed its existence,” The Washington Post, May 22, 2017.)

Those kinds of headlines spread out over the course of a year or two might be something Wall Street can easily digest, but to get hit with this much chaos in just a matter of days and for investors to shrug it off, like they did with weak U.S. economic data and geopolitical tensions, might be asking a bit much.

Gold retreated off August 2016 highs near $1,060 per ounce and took a beating after Donald Trump won the U.S. election. Investors believed that Trump’s pro-business policies would usher in a period of growth and low volatility. By mid-December, gold prices had fallen to $1,124.30 per ounce.

It appeared as though 2017 was going to be an uneventful year for gold bugs as investor optimism remained strong. Plans for economic growth has been mired in political controversy after controversy and fears that the political trouble will spill into the markets is rising.

As a safe-haven investment, gold bullion has entered a new bull market as investors seek to manage the risk that President Trump’s administration is facing. Again, in the coming weeks, gold prices could breakout to $1,290 per ounce as investors get spooked about the health of the U.S. economy and troubles percolating in Washington.

Should Trump’s administration face fears of impeachment, investors can expect the S&P 500 to be gutted and gold to soar to record levels.