The Gold Price Could Rise Sharply in the Next Few Months

Two important developments will affect the gold price over the next few months. The first is that President Donald Trump has all but declared a “cold war” on China, all but identifying it as the principal culprit for abusing American technological innovation and violating copyright norms. Trump has also stressed he wants to change the balance of trade in America’s favor.

The second is that the Federal Reserve’s quarter-percent interest rate hike, announced on March 21, may have caught several investors by surprise. Given the optimistic chatter about job growth and supposedly rising wages—therefore, higher inflation prospects are on the horizon—the small increase warrants a sobering perspective. Rather than a bullish move, the U.S. dollar has dropped slightly against major international currencies.

The markets seemed disappointed by the fact that instead of four rate hikes in 2018, Powell said there would be only three. Wall Street and fickleness go hand in hand. Rather than interpreting this step—because it supports taking risks on stocks—investors have reacted with caution.

It’s as if, by applying a moderate rate hike, Powell had conceded that dark clouds are lurking. The U.S. economy may not be performing as high as many have enthused over. But the risks on the horizon are becoming less abstract now.

Trump wants to impose some $60.0 billion in tariffs on Chinese imports alone. The fact that he’s let Europe, Australia, and NAFTA partners off the hook sends a clear message to Beijing—and may even get some quiet/behind-the-scenes backing from Brussels. Yet, Trump and Americans, in general, should expect consequences. China is a country on the economic and military ascendant. It’s not going to put its head in the sand like an ostrich. China will react.

The question is how. There’s no doubt that Trump’s tariffs are going to hurt China. The president is determined to reduce the trade deficit, which is largely in China’s favor. In some ways, China has become a victim of its own success. The risks are on both sides of the Pacific; equity markets could suffer. The Chinese government has banned Bitcoin trading on its territory.

Given that there’s uncertainty on both sides, the appeal of precious metals and safe-haven investments has increased. The gold price could finally find the support it needs to cross the next major barrier. It has, in fact, made the biggest single-day gain in weeks. 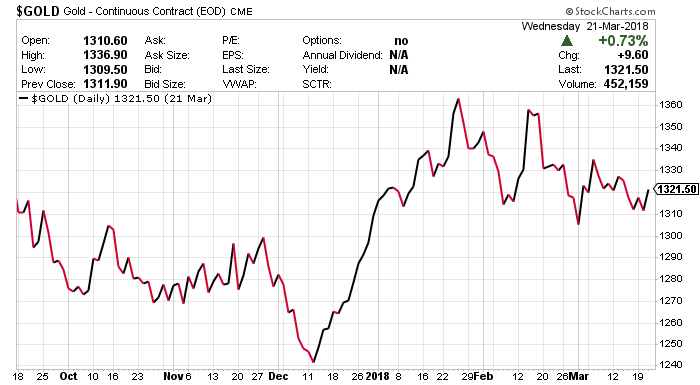 Trump’s anti-China sanctions are significant. They could overturn measures that were first adopted in 1974. That’s just three years after President Richard Nixon’s historic visit to Beijing, which marked a massive shift in the policy of the People’s Republic. In other words, Trump is going for broke.

It’s a gamble, and it’s all based on Section 301 of the Trade Act of 1974. This is no small matter. This is the Act that demands American companies that want to operate in China to transfer intellectual property and technology to their local business partners. (Source: “China facing US$60b in punitive tariffs in Donald Trump’s assault on Beijing’s tech policy,” South China Morning Post, March 23, 2018.)

It’s not by chance that Trump wants to impose $60.0 billion in tariffs on Chinese goods. That figure represents a rough estimate of what American companies doing business in China lose each year as a result of Section 301. The message that Trump has sent is clear: China benefits far more than the United States from their trade partnership.

Trump is taking this risk because he understands that China is banking on moving from being mainly a manufacturing power to a fully developed industrial one, rivaling the United States and Europe in design and conception of technology.

Trump Is Gambling with a Crucial Commercial Relationship

Trump’s move cannot but alter what might be the most important trade relationship in the world. Investors should be worried. Trump’s moves will do nothing to boost U.S. exports toward China. If anything, China will take even more steps against that.

Make no mistake, China boasts a population that’s over four times that of the United States. What would be the smarter long-term strategy to pursue? Trump is going for short-term gains and “patriotism” appeal. But investors care about their wallets—more than transient pride.

Indeed, the markets have already spoken: The Dow has dropped to the lowest level since the flash-crash of the first week of February 2018. Now it’s China’s turn and Beijing can hit back. It won’t necessarily be in the form of a trade war. China has already been shifting away from relying on manufacturing over the past few years.

There’s a growing “middle class” in China, whereas in the United States and the West, the middle class is shrinking. This means that China has been gearing up to stimulate domestic demand, rather than external, for growth. In other words, in the longer term, the U.S. has more to gain by not shaking the boat too much—even if there’s a logic behind Trump’s thunderous trade pronouncements.

Still, the damage is done. Trump has intensified investors’ impulse to pursue a flight to safety. One of the main effects of the trade war will be to slow global economic growth. Trump’s gamble may be to force China to adopt measures to protect foreign investment, encouraging more of it. But, Trump may have exceeded in his condemnation. President Xi Jinping, who wants to change the Constitution to adopt what might be best described as “presidency for life,” will have to show some strength.

Since the early 1970s, the United States stopped using gold as the basis of the dollar’s value. The Bretton Woods Agreement ended in 1971. Since then, the United States has become one massive debt-accumulating machine, borrowing all over the world through the sale of bonds (U.S. Treasuries).

Japan and China have become its major creditors.

In practice, the Japanese and increasingly, the Chinese, are financing Americans’ consumer habits. Indeed, while China may enjoy a massive trade surplus with the United States, it’s also true that it uses that surplus to buy back U.S. debt. It’s not by chance that Bretton Woods ended in 1971.

Indeed, this must be the starting point of an analysis of the effects of Trump’s trade war with China. Note that over the past 30 years, the U.S. has accumulated some $10.0 trillion worth of trade deficits with China. (Source: “Cumulative U.S. Trade Deficits Resulting In Net Profits For The U.S. (And Net Losses For China),” Seeking Alpha, October 15, 2016.)

China Can Muster a Big Debt Muscle Against the U.S.

The U.S. government or public debt has stretched over $21.0 trillion. Trump’s tax cuts risk driving it higher and at a faster rate. The question is: Without gold as a backup and with huge debt, how can the U.S. keep its huge expenditures? It’s a self-perpetuating problem. The United States maintains a huge geopolitical and military presence. That is its insurance policy against its public debt.

The mere threat that China could start dumping its holdings of U.S. debt will test or break that system. That’s why a trade war with China cannot remain in the realm of “trade” alone for too long. Sooner or later, the U.S. will be tempted to use its military power to defend a policy that’s existed for almost 50 years.

Moreover, the dollar’s direction considering a trade war with China is bearish. And the weaker the dollar, the higher the gold price. A trade war and a weak dollar makes for a great investment in 2018. If Trump is prepared to see his threats through to their inevitable conclusion, the gold price should jolt. There are good odds that Trump will do this.

Trump was elected on a job growth platform. He wants to bring back the heydays of the 1950s and 1960s; that’s what he means by “Making America Great Again.”

By that logic, Trump must bring back the jobs that left America in the 1990s under Clinton and even more so under G.W. Bush and Barack Obama. By creating economic (and political) barriers to China, Trump believes he can grab a bigger slice of the global market for U.S. companies, boosting employment prospects for American workers. The money is undecided about whether this can work.

But should Trump proceed with this strategy, you can bet the gold price will increase.