Gold Price Forecast Looking Upon a Harbinger of Positive Catalysts

Our long-term gold price forecast is on the upswing, thanks to bullish tailwinds blowing in gold’s favor. Below, we’ll highlight three main catalysts that could take gold to $5,000/oz and beyond as well as our gold price forecast for the next 10 years.

In the meantime, gold prices in U.S. dollar terms have to work through the so-called “Goldilocks economy” that’s keeping them down. That is, GDP growth hovering between two percent and three percent, low inflation, and rising interest rates. It isn’t the type of environment conducive for sustained gains in prices.

The gold price per ounce has been hovering between $1,200-$1,360 in a range-bound trade that’s been a real snooze to watch. Every rally has been sold; every sell-off bought. Gold rests in a holding pattern, waiting for a dominant catalyst to take charge.

Think of it as an opportunity cost of sorts. If a high-interest savings account pays 3.75% and inflation is 2.5%, an investor can earn “risk-free” returns of 1.25% just for keeping money in the bank. Gold can’t match yields of any sort.

But when real interest rates are low, holding gold becomes cheap. Heck, it may even pay a defacto yield in a negative rate environment, when depositors pay for the privilege of sheltering their money.

Looking past the post-mortem after-effects a global recession will have on the economy, even lower real interest rates might be the norm. This would be tremendously gold-positive.

A perfect template is Japan. It has one of the lowest real interest rates in the world; certainly, in the industrialized world. The Bank of Japan maneuvers short-term interest rates below zero (-0.1%) and 10-year government bond yields around zero percent. With inflation only running about 0.5% annualized, the spread between rates and inflation is ultra-low. (Source: “BOJ’s Kuroda says limits to how deeply rates can go negative,” Reuters, September 21, 2017.) 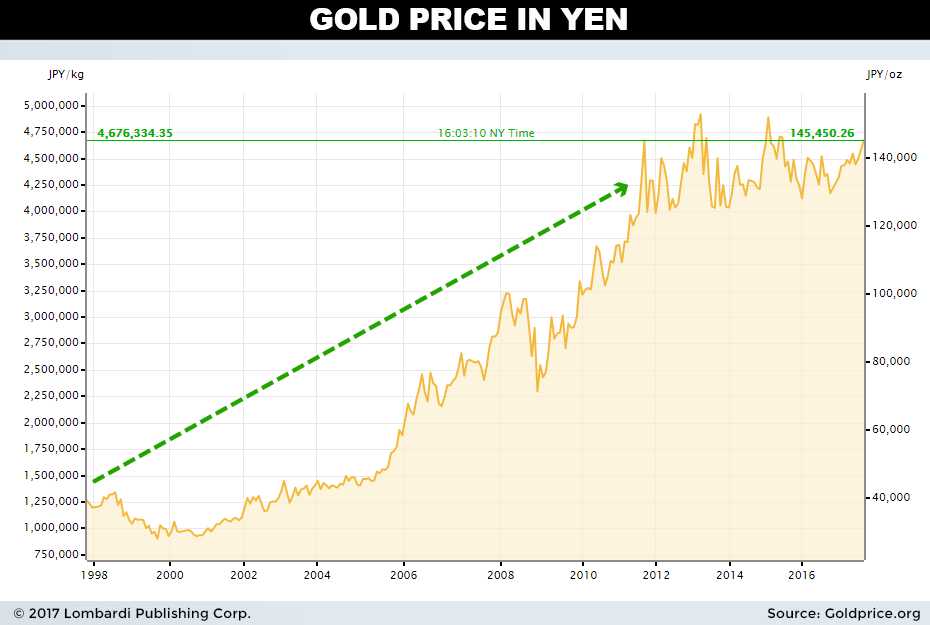 It’s perhaps the primary reason why gold prices in yen are holding up extremely well (far better than USD). In fact, it’s only about five percent off its all-time highs (compared to gold/USD which is off 35%).

Now picture a world where rising debt levels cannot be extinguished, forcing central banks to intervene in bonds to suppress interest rates. The trend towards more monetization, more intervention, and demand substitution is unmistakable. We expect interest rates could be headed even lower (or negative), along with inflation, forcing real interest rates even lower.

In other words, the world will probably follow the Japanese model of top-down central bank control and monetization. This will become evident when the Fed conjures up many more trillions to bail out the economy and pension funds during the next recession. Deteriorating trends in demographics will only hasten deflationary tendencies even more.

If we’re right about this prediction, gold prices 10 years from now will be much higher as coordinated real interest rates in most of the western world trend lower.

The production costs of gold, like other commodities, is largely influenced by energy costs. The higher the price of crude oil, the higher the gold production costs. This is especially true in the energy-intensive gold mining sector, where unearthing a tonne of rock might yield two or three ounces of gold after several processes are followed.

Thus, energy complex costs have an enormous effect on price. Gold prices should rise with the cost of energy, as the implied cost of unearthing future production rises.

Simply looking at gold prices vs oil prices over time gives you a good idea of the strong correlation between the two. 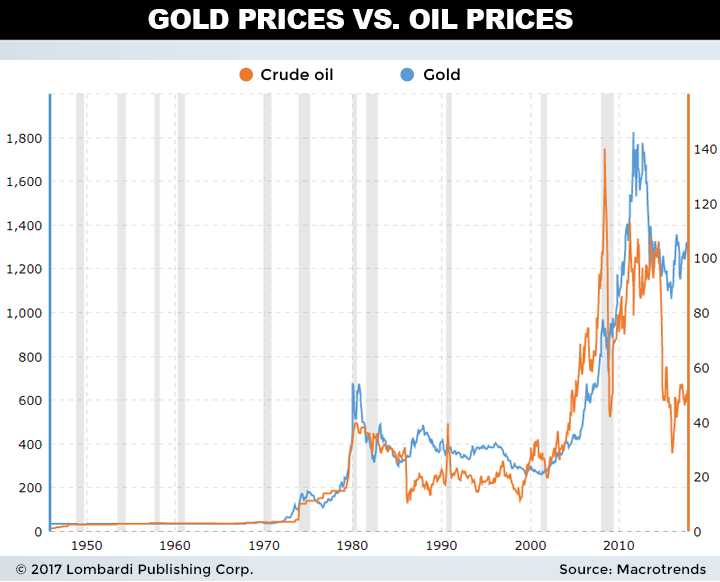 Except for a few severe dislocations, the two commodities generally move together in trend and voracity. In fact, crude oil’s overshoot starting in mid-2014 should have it playing catch-up in the intermediate term.

This factor has numerous moving parts to it.

For one, central banks (in America, the Federal Reserve) can adjust interest rate levels. Most investors are familiar with the Fed’s near-monthly two-day meetings, which result in either an adjustment in the Fed Funds Rate or a cryptic statement about future interest rate adjustment expectations.

The Fed also targets inflation levels as part of its “price stability” mandate. In this business cycle, the Fed has been targeting two-percent inflation as its desired objective.

With the ability to exert direct influence on both interest rates and inflation, the Fed can steer capital towards gold or other risk assets like stocks.

World central banks are also among the biggest direct buyers of gold. It is purchased periodically for a number of reasons.

For one, gold shores up capital reserves and promotes stability of a country’s financial and fiat currency system. Gold also provides a hedge against a sagging U.S. dollar, as most nations hold a significant amount of USD in foreign reserves.

Given the chronic indebtedness and weakening fiscal position of most world nations, central bank accumulation of gold seems probable. Even during a multiyear period of solid world economic growth, central banks have been net buyers since 2008. Not a big surprise when you consider the debt-to-GDP ratio in most industrialized countries has continued to rise.

With sovereign debt levels careening out of control in “good” times, imagine what will happen when the environment changes. Even higher levels of debt monetization and stimulus to normalize economies will be extremely gold-friendly.

Gold Reserves by Country (as of February 2017)

Gold Price Forecast for the Next 10 Years

Trying to predict an accurate gold price forecast 10 years out takes vision. So many variables exist beyond what is known today.

For instance, will a U.S. dollar crisis unfold, where nations abandon transacting trade in U.S. dollars? That would be a game changer for gold, as the dollar would weaken significantly.

We already see this trend accelerating. China and Russia have announced a bilateral agreement to exchange big-ticket goods in rubles and yuan. Iran vowed to ditch the dollar in response to Trump’s “Muslim ban.” Venezuela has threatened to do the same thing as its socialist utopia disintegrates.

As the U.S. continues to engage in reckless fiscal spending, the problem will only feed on itself. Indeed, when agreeing to a temporary debt ceiling deal in September, president Trump vowed to bypass future debt ceiling negotiations altogether. Thus, the fiscal malfeasance has potential to grow in the future.

lI’m not forecasting the latter to happen, as I expect a more Japan-esque type environment. But it’s a possibility worth considering.

Using a baseline trend scenario in skyrocketing sovereign debt, further interest rate suppression (in many cases, negative rates), moderately higher hydrocarbon prices, and shifts away from the U.S. dollar as the world’s “reserve” currency, we set our gold price forecast to $5,000/oz for the next 10 years.

As always, the move is bound to be asymmetrical depending upon the period of the business cycle. As mentioned, today’s moderate inflation and moderate growth environment is not particularly gold-supportive. But during the next crisis, when the full scope of stimulatory measures needed to stabilize the economy are known, gold could shoot up like a rocket.

I haven’t even focused on the extreme political risk. The “fear hedge” risk that gold provides should come into play if, for example, war in the Middle East breaks out. An increase in oil prices—especially in a long-term conflict—will make gold production more expensive, exerting upwards bias on prices.

With all that’s going on in today’s world, gold seems like the ultimate smart play. Real interest rates are likely to fall, geopolitical risk is the highest in a couple decades, and fiscal insanity is off the charts. Gold is one of the few assets that act as insurance against fiscal calamity and have great capital appreciation potential in bursts when conditions are ripe.

If we’re right about our gold price forecast, $5,000/oz gold may be on the long-term horizon for prescient investors.