Precious Metal Analysis Suggests Gold Is a Great Investment for 2018

The U.S. Dollar Is Under Pressure. That Makes for Bullish Gold Investments in 2018

The U.S. dollar cannot catch a break these days. It’s sunk to the lowest level in months and there’s no parachute to slow the descent. Neither inflation nor higher interest rates are likely in the short or even medium term. The U.S. economy is not growing fast enough, which prevents the Federal Reserve from raising interest rates. There’s little doubt that a gold investment in 2018 would be wise.

Indeed, investing in gold before 2018 might be wiser. The gold price in 2018 could push and break the $1,400-per-ounce barrier. But that’s just the beginning, because if the gold price forecast for 2018 has taken a favorable turn, then gold future price predictions are even more bullish. If you have been wondering what the best way to invest in gold is, or how to invest in gold, 2017 has provided a textbook example.

During the second quarter of this year, gold prices fell slightly. Yet they never stayed below $1,200 per ounce for too long. Perhaps expectations that Trump was going to ease geopolitical tensions with Russia helped to reduce risk. More importantly, the Federal Reserve raised interest rates three consecutive times, most recently in June. That added more pressure, hurting gold and precious metals in general, as it were.

The proof was in the pudding, as they say. All it took to reverse the course of gold prices was an admission from Fed Chair Janet Yellen. She conceded that, after all, the U.S. economy is not performing quite as well as everybody thought. The most optimistic gross domestic product (GDP) growth statistics of about 1.7% are far below expectations. Trump said that he would boost the annual economic growth rate to three percent, but that seems unlikely if not impossible now.

The Economy Is Not Performing All That Well

There is a perception that the economy has been performing well. The news headlines blaring out of radios and TVs can’t hold back their enthusiasm. Pundits on the ever growing list of financial news shows from New York, London, and Hong Kong speak of bullish scenarios. It was just a few nights ago that a serious-looking analyst, wearing a colorful but respectable tie, proclaimed that the current bull market run on Wall Street—already nine years in the running—has a decade or more left in it.

But does it? Predicting the continuation of a sustained market run is like predicting the weather a year from now. Except that the weather gives us more tools to work with. There are actual atmospheric phenomena that can be tracked and interpreted. They tell us if it’s going to be sunny or rainy, cold or warm. So far, stock market analysts haven’t come up with as “accurate” predictive tools, let alone ones able to predict stock valuations months in advance.

You might think gold suffers from the same predictive dilemma. But, in fact, gold has been around so long that the tools or mechanisms we use to understand its price fluctuations can be more easily and reliably understood. Unlike the individual stocks that make up the exchange market, the factors that move gold up or down are more general, which is reassuring for those interested in gold investment.

After that premise, the big picture now has become rather clear. This makes it easier to make gold price predictions. The gold price in 2018 should be considerably higher than now. It seems likely that gold could hit a price of $1,300 per ounce before the end of August 2017. But, a cluster of risks is building around Washington, which could spread to Wall Street before the end of the year.

One of these risks is President Donald Trump’s impeachment. This does not mean that we encourage or agree with it, but it’s a realistic scenario that cannot be ignored. Given the past experience with Bill Clinton, who had actually managed to execute some of the policies he wanted, the United States could be looking at a turbulent 12 months ahead.

The “psychological” factor of an impeachment on the course of the markets alone could add a few hundred dollars to the price of gold, which makes gold investment in 2017 seem like a good idea. In Trump’s case, there’s the additional negative energy that comes from deflated market expectations. Since November 2016, the stock market has added some 4,500 points to the Dow Jones. That’s in less than a year! But with Trump gone, the strongly pro-market policies like major tax cuts and penalty free repatriations of American capital from abroad won’t have the foundation on which to rest.

Thus, gold has plenty to gain for the rest of 2017. It could gain far more in 2018 on the back of fresh geopolitical tensions building on top of the existing ones. They would combine the growing instability surrounding Donald Trump with a chaotic international situation. If the market has been quiet for gold so far, gold investment in 2018 could get very loud indeed.

The following chart shows the Citigroup Economic Surprise Index. It measures the difference between financial expectations and actual indicators. If it’s moving upwards, it says the economy is doing better than expected. Downwards means the opposite. It’s pointing straight down now. Stocks are dangerous. 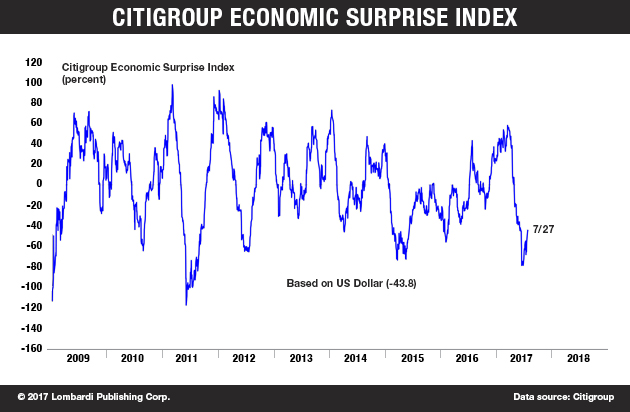 Gold future price predictions have become so bold that demand for physical gold itself could increase in 2017 and 2018. The political uncertainty and tensions across the globe have made the holding of physical precious metals popular again. In addition, there are indications that physical demand from Asia is recovering strongly.

India, the second-largest gold consumer in the world, recorded a rise in demand since January in the wake of the government’s decision to lower import duties on gold bullion. (Source: “Gold steadies after slipping from six-week high,” The Times of India, July 28, 2017.)

Meanwhile, in China, the world’s largest consumer of gold, local consumption grew by 10% in the first quarter, with investment bullion sales that grew by over 50%. (Source: “Chinese Demand for Gold Bars Climbs by Half on Hunt for Havens,” CNBC, July 28, 2017.)

With demand growing, even if there should be surplus of supply in 2017, prices should rise in the face of higher risks. Investors everywhere are simply looking for a haven from the turmoil.

Then there’s the fact that the same turmoil that’s driving gold demand higher is putting pressure on many stocks. The one sector that could remain bullish is defense. So much of the risk owes to the higher chances of wars erupting all over the world. The Fed’s next decisions are sure to reflect this. To raise interest rates requires confidence in the economy.

When the Fed raises rates, it thinks the economy has become so strong that it can sustain a higher cost of borrowing. But the growing disappointment over Donald Trump’s shock and countershock on the U.S. economy will soon catch up with Wall Street. Yet, it will support a higher gold price forecast for 2018.

While conservative estimates limit themselves to gold settling in the low side of $1,300 per ounce, Kaiser Research Online expects gold could reach $2,000 per ounce over the next three years. (Source: “Kaiser Research Online’s John Kaiser on Why Midas Gold’s Stibnite Gold Project Could be a Huge Winner,” Resource Stock Digest, July 10, 2017.)

If you think that’s impossible or way off the charts, consider this. The big rally on Wall Street was predicated on Trump’s tax reform. This is the issue that Trump must win, especially after the embarrassing loss of the healthcare reform bill in the Senate. If he doesn’t, Trump is a sitting duck in the White House. The economy won’t have a leg to stand on and the markets will flop. It’s a lose/lose situation: less-than-expected GDP growth and a stock market crash on Wall Street.

Even if Trump gets the tax reform through—if the Russiagate fanatics don’t get to him first, pushing for impeachment—it might come in a diluted form. Trump’s plan to cut corporate taxes from 35% to 15% always bordered on the overly ambitious side. He may revise the cut, limiting it to 25%. This will still raise questions about the debt, but it might be more digestible for the Democrats.

Yet, given that the Senate has voted to keep Obamacare, any tax cut achievement will be a miracle. Trump’s plan was to finance the tax reform with savings generated by the cancellation of Obamacare. The rest of the cuts, according to Trump, was to arrive in the form of higher tax revenues. He expected more Americans to be finding better-paying jobs. That would have pushed economic growth, filling government coffers. It was simple and brilliant.

The IMF has revised the U.S. economic growth prospects downward. The government will have to raise the debt ceiling or be forced to shut itself down. Against this background, Trump will have to deal with the inevitable repercussions of the diplomatic war between Moscow and Washington.

The combination of internal and external political risks facing the United States has rarely been more intense. External and internal problems, inconclusive policy promises, stock market bubbles, and an inability to ease tensions with Russia will put tremendous pressure on the U.S. dollar. For those interested in gold investment, that alone makes for much more bullish gold price predictions for 2018.