Where Will World War 3 Begin?

In 2017, the marching sound of boots on the ground is already echoing throughout Eastern Europe. The South and East China Seas have become a prime destination for military ships and U.S. diplomatic tensions are at a level of intensity not felt since the coldest days of the Cold War. It would be foolish, therefore, to dismiss warnings or fears of World War 3 in the next few years.

Any major conflict that breaks out now could escalate to a World War 3 scenario. These are hardly the musings of a few conspiracy theorists or eccentrics. The present geopolitical and economic background is weak, there’s a tremendous potential for unforeseen events (black swans) to trigger a calamity as WW3.

Where could it happen? Whereas World War 1 could not have started but in Europe, given that the world’s international powers were there, World War 3 could start anywhere. The United States remains the dominant power today. Whether we have a WW3 in 2017 or a WW3 in 2018 is anyone’s guess. But the conditions exist for a World War 3 in 2017.

In 1914, when WW1 started, the U.S. was powerful, but also isolationist and less influential than the United Kingdom or even France. Just consider that the international language was French and not English in 1914!

WW3 Could Start Anywhere from Russia to China and Syria. Here’s Why

Today, any number of settings could set off the deadly spark of conflict. Russia-Ukraine and the Syrian War lend themselves to WW3 predictions. Everything in the world is unfolding as if the world is already preparing for war, worries none other than former Soviet leader Mikhail Gorbachev.

Gorbachev managed what could have turned into WW3 with Russia into one of the most peaceful periods in recent history. That period was the early 1990s and at least insofar as Eurasia and the Americas are concerned, the world felt safe. Now that China has entered the arms race, a China WW3 scenario cannot be excluded.

There was palpable hopefulness about the future, even if the real economy had already started to give way to the predatory and unproductive financial games that would lead to financial crashes and economic collapse rivaling 1929 in negative intensity. Such was the optimism of those years between 1990 and 1996 that, never before or again, were the Palestinians and Israelis so close to reaching a permanent peace.

The 1990s began with the fall of the Berlin Wall, opening up the Eastern Bloc, and breaking up the Soviet Union. That process faced and passed a major test in 1990/1991. Iraqi dictator Saddam Hussein launched an invasion of Kuwait in August of 1990.

By January of 1991, the United States had assembled a major international coalition. It even included Soviet-protected states like Syria in the coalition. Had the United States responded to a similar invasion while the Cold War was in full swing, it could have resulted in WW3, triggering a Russian response.

But, as the 1990s progressed, the integration of Russia in the western system did not proceed well. Under Boris Yeltsin, who led the Russian Federation after Gorbachev allowed the Soviet Union to break up, Russia saw a “wild west” rapacious form of capitalism. A handful of people with government connections became fabulously wealthy taking over former state productive assets for kopeks on the ruble.

But, there was a plan from the West to encroach on Russia, weakening its influence. The wars of the former Yugoslavia provided a perfect opportunity to divide and conquer. After the independence of Slovenia, Croatia, Serbia, Bosnia, and Montenegro, NATO used Kosovo as a trigger to complete the task. They weakened Serbia and humiliated Russia.

Yeltsin could do little but watch. In 2000, Vladimir Putin took over the presidency and changed the submissive tune of the 1990s. He restored Russian nationalism and pride. The West has tested Russia on several occasions, finding out that Putin won’t budge. The latest and biggest of these tests has been Syria.

Now, the spark for WW3 in Syria has become a credible proposition. Likewise, nobody can dismiss the possibility of a spark for WW3 in China or in North Korea. Clearly, the U.S. government and many of its allies and rivals worry about it. If they didn’t, world leaders would be less keen to spend taxpayers’ money on heavy armaments. 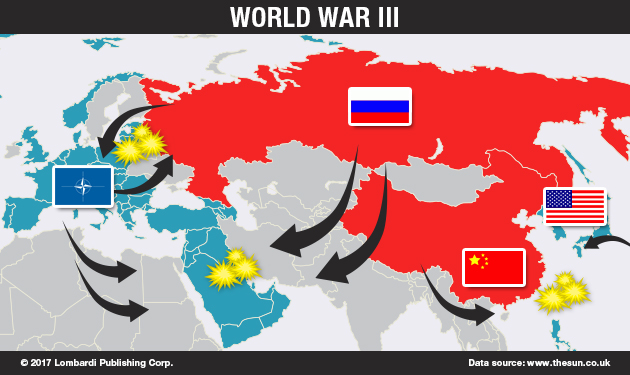 In 2017, Europe will celebrate 60 years of unprecedented peace. The event that symbolizes the start of that peace is the Treaty of Rome of March 25, 1957. It was the foundation for the European Union. Yet the EU faces internal and external threats now. The celebrations of politicians aside, it has raised the alarm that there’s high risk of global conflagration again.

Europe might not last another five years, let alone another 60. An increasingly uncertain world, the physical and political barriers set up after World War 2 are eroding at a fast pace. The leading powers of the Cold War, while building their armies and nuclear stockpiles, tried to avoid bellicose rhetoric. This was especially the case after the Cuban Missile Crisis in 1962.

Now, many people, whether or not in positions of power, are worrying about a major world war again: WW3. A recent report on what the world might be like in 2035, published by the National Intelligence Council, offers few reassurances and many concerns. (Source: “The National Intelligence Council: The Upcoming Global Trends 2035 Report,” Small Wars Journal, May 30, 2016.)

The report, loaded with WW3 predictions, speaks of economic and environmental calamities, which create the very kinds of conditions that lead to wars. The question is, however, will the world as we know it even make it as far as 2035? The intelligence agencies discuss what they call the paradoxes of progress.

Despite the economic and technological opportunities, our societies have never been threatened by so many dangers. Thus, they present a number of scenarios that could spark a major global war, or WW3, over the next 20 years. History has taught us not to trust peace agreements. David Fromkin wrote one of the best books ever on the topic of WW1.

What Is WW3? A Look Back to WW1 for an Explanation

The title of the book does not mince words or intentions: A Peace to End All Peace: The Fall of the Ottoman Empire and the Creation of the Modern Middle East. In it, Fromkin discusses the events and developments leading up to the First World War. In particular, he breaks down the flawed formation of the current Middle East, highlighting its potential to serve as a trigger for many wars to come.

That’s one of the reasons that Islamic State, or ISIS, has raised such concerns. It has literally leveraged its power on the back of the 1919 Treaty of Versailles that Fromkin identified as a weak link in 1989. At the Paris Conference in 1919, then British Prime Minister Winston Churchill drew the map of the modern Middle East after the disintegration of the Ottoman Empire.

George W. Bush and his advisors made a huge mistake, ignoring Fromkin’s analysis. Fromkin notes that Iraq in particular, created by assembling three Ottoman provinces together (Shiites in South, Sunnis in the middle, and Kurds in the north), was a time bomb that could go off anytime. Syria, meanwhile, was subdivided into small rival regions.

That left them prone to fighting among themselves. Indeed, as David Fromkin put it, it was a truly the “peace” that would end any hope of peace. Not surprisingly, to date, most Arab states have only known the rule of the iron fist. That’s because it’s been the only way to keep those countries united and somewhat stable.

When one of these dictators falls, as in 2003 in Iraq or in 2011 in Libya, the state edifice collapses. President al-Asad in Syria has not fallen only because the West miscalculated Russia’s resolve to maintain Syria in one piece. While the war with ISIS and the other Islamist rebels appears to be ending, groups like ISIS can spring up anytime.

The potential for a WW3 beginning in Syria exists now. President Trump might scrap the Iran nuclear deal. He has said that clearly. Scrapping the deal means the U.S. or Israel will launch a military strike against Iran’s nuclear facilities. At that point, Iran, a Russian ally, would enter a state of war with the United States, dragging in key elements of the Middle Eastern chessboard.

Had the U.S. pursued Iran or Syria in the 1990s, when Russia was dealing with the aftermath of the USSR’s collapse, there would have been little risk of repercussion. Moscow was still trying to make sense of the Afghanistan disaster to become involved in a Middle Eastern war. But, Putin has put Russia on the nationalist march again. He will react.

As the world stands now, a black swan event could spark a Syrian war that could pit the U.S. against Russia. Thus, the impact of the First World War continues to affect the future and where the triggers of the next war shall emerge. The problem is that NATO has been pushing its borders to the threshold of the Russian Federation after the Cold War.

That means Russia would come under pressure from Europe as well, even the spark for war came from the Middle East. The Russia-Ukraine tensions remain. All it would take to intensify the level of mistrust is NATO extending membership, even a partial one, to Ukraine.

The military West, NATO, and the U.S. have exploited Russia’s period of weakness to expand their influence eastward. Sabotaging relations between Russia and its European neighbors was one of the keys to achieve this effort. But Russia has not been weakened; the Syrian war has shown it has sophisticated weapons that are a match for whatever the Americans can throw at them.

From the intensification of the fighting in Ukraine to the revival of tensions in the South China Sea the world is dancing on the edge of a volcano to an eerie tune. Another global conflict is possible. It will be the Third World War, involving the United States of America and its allies in the West against Russia with its allies in the East.

This Is the Reason the Gold Price Has Stumbled