These Factors Could Lead to World War 3

This may sound outrageous, but it’s true: World War 3 (WW3)is starting to become a topic of discussion among individuals these days. One big question is being asked: could there be an issue that leads to an outright war involving major nations?

You have to wonder: why would someone even think World War 3 could be a possibility?

Sadly, if you just look at the newspapers, it’s easy to get swayed into this opinion. The headlines are filled with words that are simply alarming.

For instance, not too long ago, President Donald Trump issued a temporary ban on all individuals from certain countries, and then removed the attorney general from her position because she questioned the constitutional legality of this ban. (Source: “Trump fires acting Attorney General for defiance on immigration order,” The Globe and Mail, January 30, 2017.)

This has led to individuals asking what could be next. Could there be retaliation from the countries that were banned, and could this result into something major like WW3?

But it’s not just the policies in the U.S. forcing people to think about World War 3. Around the world, there are developments that suggest conflicts can brew and get bigger.

Another example of this is the South China Sea dispute.

At its basic level, China is trying to have further control over the South China Sea, which includes key maritime territory. In the process, it has sent out naval ships, and is building man-made islands. (Source: “The South China Sea: Explaining the Dispute,” The New York Times, July 14, 2016.)

This has countries bordering the South China Sea concerned. As a result, the U.S. has become involved and wants to mediate.

Could this turn out to be an issue that acts as a catalyst to WW3?

Then, there’s the Middle East. Syria and Iraq remain the troubled spots in the region. There are too many countries and groups involved, and the fear is that one bad move can lead to severe consequences.

Add Russia to the equation, too. There’s a lot of noise that Russia wants to increase its borders. Russia annexing Crimea was a major red flag about its intentions.

With all this said, look at the chart below. This chart shows Google searches of “WW3,” since 2004.  It’s scary to say the least. 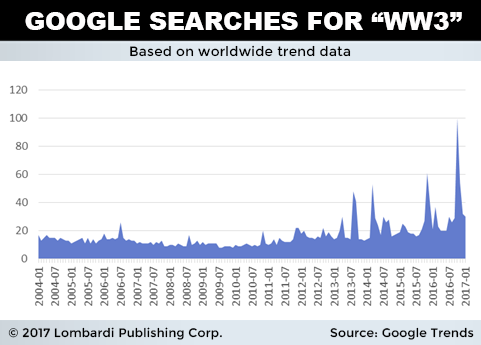 In the past two years, there have been significantly more Google searches about World War 3.

Could There Be WW3?

I would prefer no wars whatsoever. There isn’t any point in them, and they lead to wounds that take a very long time to heal. Simple.

Here’s the thing, though; if this rhetoric continues, and World War 3 becomes a mainstream topic, it’s going to create uncertainty around the globe.

Understand that—despite certain industries profiting from military conflict—overall, wars wipe out wealth. So, it wouldn’t be shocking to see investors run toward safety on the back of all the noise. With this, if there’s one thing that has a solid track record storing wealth and value, it’s gold. More uncertainty could cause spikes in gold prices.