The Wealthy Lose Out with the New Tax Cuts and Jobs Act?

Republican Party spokesperson Kayleigh McEnany recently took to Twitter, claiming that the new tax cuts and jobs act is going to eliminate $4.0 trillion in tax loopholes for the wealthy.

McEnany goes on in more detail, saying that there will be fewer tax deductions given to the following individuals associated with the government: members of Congress and lobbyists. Also, corporate taxes are expected to see fewer benefits, from everyday businesses costs all the way to executives within a company.

McEnany used to work for the CNN network as a commentator. Her former employer is important to note because they have a political stance against President Donald Trump. The president himself has said that any report related to him from CNN is “fake news.”

More recently, President Trump was correct in calling out the network for spreading “fake news.” CNN reported that Donald Trump and his son had access to documents from WikiLeaks before they were available to the public. It turned out that this was false; there was an e-mail sent to Donald Trump Jr. but this was after the public had access to the documents. In the end, CNN did apologize for stating incorrect facts. (Source: “CNN corrects story on email to Trumps about Wikileaks, ” CNN, December 8, 2017.)

Let’s go through an in-depth fact check of whether the claim by Kayleigh McEnany is true or false.

Changes to Taxes for Political Figures and Affiliation Members

Individuals who are involved in politics in Washington and around the country will be impacted by the new tax cuts and jobs act. One major change that will impact the tax returns of politicians will be regarding moving expenses. Previously, when a politician (or any American taxpayer) was going to make a move, let’s say to Washington, moving costs could be used as a tax deduction. Under the new legislation, this will end (except for serving members of the military). (Source: “H.R.1 An Act to provide for reconciliation pursuant to titles II and V of the concurrent resolution on the budget for fiscal year 2018,” Library of Congress, December 20, 2017.)

In addition, members of Congress will no longer receive the ability to deduct costs incurred from living expenses. In the past, this tax deduction was used for individuals who were relocating their residence in order to meet the schedule of Congress.

Also, the deduction that was once seen for local lobbying will no longer be accepted by the Internal Revenue Services (IRS). (Source: Ibid.) 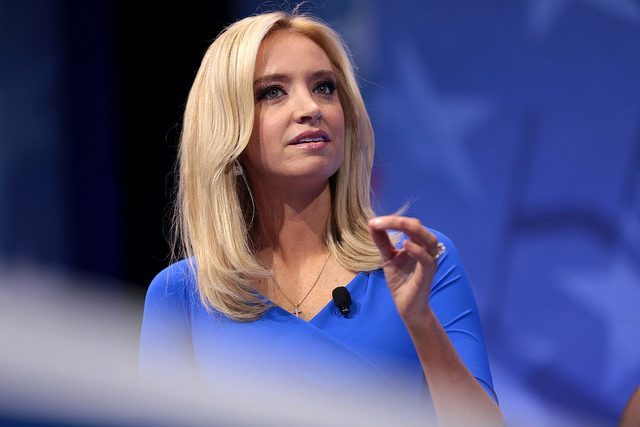 Was Kayleigh McEnany right about taxes on political figures and those affiliated with them?

Yes, she was correct in her statement relating to members of Congress and lobbyists no longer receiving certain tax benefits.

Changes to the Corporate Tax Rate

In regards to the corporate tax rate, there will be changes occurring which will both hurt and benefit businesses. The first major change is that the corporate tax rate will be going from 35% to 20%. Companies that use debt to grow their businesses will incur interest costs, which is presently a business expense write-down. Under the new rules, there will be lower limits of how much interest that can be written down when compared to the earnings before interest, taxes, depreciation and amortization (EBITDA). (Source: “Tax Cuts and Jobs Act Will Cost $1.5 Trillion,” Committee for a Responsible Federal Budget, November 2, 2017.)

In addition, there will be limits on net operating loss carryovers; this is when a profit in one year is written off against a year which generates a loss. The entertainment expense deduction will be eliminated and the executive compensation benefit will be reformed.

Was Kayleigh McEnany Right About Her Corporate Tax Statement?

Yes, Kayleigh McEnany was correct about her statement about there being an elimination to entertainment and executive compensation tax benefits that were received in the past.

What does this mean?

Well, previously, when a company purchased items such as food, tickets for a sports event, or tickets for a musical, they would be able to write it off from taxable income. This is one method that allowed companies to persuade their clients or employees to remain loyal to the company. Therefore, at times, there would be reckless spending by companies because the money could be deducted from their taxes. This is one example of a tax loophole being closed for corporations.

Another tax loophole that is going to be closed relates to how executives get paid. Now the plan is to tax executives when shares as part of their compensation are vested rather than paid. When an executive is paid in vested shares, there is a lock-up period before the money can be obtained through a sale of the shares. In the past, when this lock-up period ended, there would be taxes applied. Now, even during the lock-up period, there will taxes applied to executives.

Both of these actions remove tax benefits that greatly impact the wealthy. This move by the Trump administration is to simplify the tax system. Rather than offering so many specific tax benefits and breaks, an overall lower tax rate is being offered.

Is the Tax Cuts and Jobs Act Really Going to Cut $4 Trillion in Tax Loopholes?

Lastly, the statement regarding the $4.0 trillion in loopholes being closed out is true. The Committee for a Responsible Federal Budget has a breakdown of all the of savings and costs of the new tax cuts and jobs act. Individual tax increases are expected to cost taxpayers $3.3 trillion. Also, business tax increases are estimated to amount to $1.2 trillion. When both of these amounts are added together, it does amount to more than $4.0 trillion. (Source: Ibid.)

In the end, all the statements made by Kayleigh McEnany are correct. There is no “fake news” being reported by her comments.