Federal Reserve Shakeup Could Set Tone for U.S. Monetary Policy 2017 and Beyond

The U.S. Federal Reserve is poised to lift interest rates this year, but what’s happening under the hood could be the more intriguing story. If Donald Trump shakes up the Fed, the direction of U.S. monetary policy 2017, as well as monetary policy for the next decade, could change drastically.

The Federal Reserve currently has two open governor vacancies, with Daniel Tarullo exiting stage-left on April 5, 2017 to make it three. His departure will mean that three open spots, out of a board of seven, will become available within two months. Furthermore, Federal Reserve Chairperson Janet Yellen’s term is up in February 2018, so Trump will have an opportunity to influence the Fed from the top down within the year. Through his appointees, we shall gain a glimmer of what Trumponomics is really all about.

And how do we know which types of monetary policies Trump favors? He’s already told us, very explicitly.

Donald Trump policies could also favor more liberal Fed monetary policy as it pertains to interest rate predictions. After all, Trump has used debt financing his entire life in private enterprise with (mostly) great results. He is known, in fact, as the “King of Debt.” Why wouldn’t he look to do the same within the confines of government? Trump is on record saying that the federal government should be run like a business, so there’s little reason to believe he’ll suddenly become a fiscal hawk now that he’s in the Oval Office.

Trump has repeatedly expressed his support for increased debt spending. All throughout his campaign and subsequent election, Trump stated that America should borrow more while rates are low. “What’s going to happen when the rates eventually will go up and you can’t borrow…This is the time to borrow.” (Source: “Trump: This Is The Time to Borrow,” The American Spectator, August 11, 2016.)

If Trump were to withdraw his support for lower rates, the whole premise of increased debt spending becomes fallacious. With U.S. government debt sitting at 106% of GDP, and rising relentlessly, ramming a comprehensive infrastructure plan through Congress would be difficult. The United States can ill afford to spend hundreds of billions more annually servicing debt payments rising interest rates would bring.

Either way, it looks like Trump’s pick for Secretary of the Treasury, Steve Mnuchin, is poised to do the heavy lifting on deficit spending. He’s currently working with Congress to procure greater deficit spending passed rather than constraining it. “I would like us to raise the debt ceiling sooner rather than later.” (Source: “New Secretary’s first job: Avoid a crisis,” CNN, February 13, 2017.)

From whichever angle you wish to analyze this administration’s policies on government spending, they invariably lead to the view that deficits in the near term don’t matter. This view is having a profound effect on equity market performances and monetary policy 2017 business expectations.

As stated, with two open governor vacancies, and a third on the way in April, Trump could influence monetary policy 2017 and beyond through his Federal Reserve appointees. Trump’s biggest impact will be when he nominates a replacement for Janet Yellen, who’s tenure ends next year. These appointees could set the course for monetary policy for the next decade. 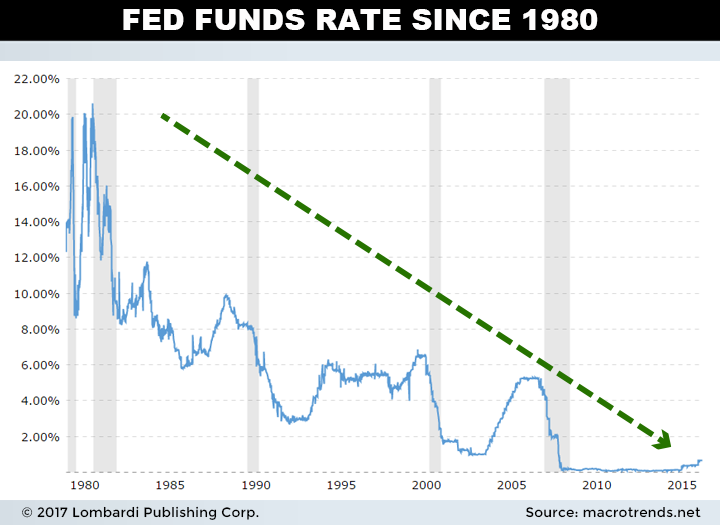 Regardless, with a professed debt spending and weaker currency agenda publicly espoused, Trump will likely seek to appoint deficit and stimulus doves to council. For all the hullabaloo about Trump’s conservative leanings on immigration, abortion, and education, he’s a liberal when it comes to debt spending.

Although the Republicans enjoy a clear majority in the Senate, Trump still may encounter steep resistance if he attempts to appoint governors who are too liberal on fiscal policy.

The Republican Senate is filled with several noted deficit hawks, including House Majority leader Paul Ryan, Mike Lee, and Rand Paul. In fact, it was the latter who voted against repealing the first step of the Affordable Care Act because the underlying budget proposal increased the federal debt over 10 years. Paul was the only Republican to vote against it on this basis, but what about next time? How many Republicans are willing to cross the isle in a serious attempt to reign in the deficit?

Whomever Trump appoints to govern the Fed, they are likely to accommodate lower interest rates and lavish stimulus spending.

Even if Trump’s appointees make it through Senate confirmations, there’s no guarantee that rising interest rates anyway won’t occur anyway. Currently, odds are less than one in three that the Federal Reserve will raise the Fed Funds Rate rate three times in 2017, as they’ve indicated they would do. Even though it’s more likely that the Fed won’t raise much, it’s not inconceivable that it could still happen.

What are the three objectives that U.S. Congress established in the Federal Reserve Act? They are maximizing employment, stabilizing prices, and moderating long-term interest rates. While things look under control now, evidence suggests the potential for overheating with objective #1 and #2, should inflation rise to unacceptable levels.

It seems inconceivable that a country with 93 million people out of the work could potentially have an overheating job market, but it’s possible. The problem is not the size of the labor pool so much as the available skilled labor. Many of America’s sidelined workers have either not been retrained, are too old, or are simply under-skilled.

The Fed is now “more worried about an overheating labor market,” said Director of U.S. Macro Investor Service at Oxford Economics, Kathy Bostjancic. “Then you lay on top the potential for pretty extensive fiscal stimulus… The worry is that really could push the economy and the labor market into an overheated condition.” (Source: “Despite hints of looming price hikes, interest-rate boost unlikely this week,” PressReader, February 1, 2017.)

Currently, official U.S. employment stands at 4.9%, or near the natural levels of full employment in a highly industrialized economy like the United States. This official “U-1” snapshot of employment is the figure that the Fed pays most attention to when assessing the condition of the labor market.

It’s also possible monetary policy tools may be used to quell overheating prices (inflation), which is simmering in several markets. Consumer prices recorded their biggest gain in nearly four years in January, as U.S. retail sales rose more than expected. This is giving the Federal Reserve more ammunition to raise rates as early as next month.

“All things consumer show the economy is starting the year off with a bang,” said Chris Rupkey, chief economist at MUFG Union Bank in New York. “Interest rates are too low and with an economy this strong rates need to be put on a preset course higher.” (Source: “U.S. retail sales rise; inflation posts largest gain in four years,” Reuters, February 15, 2017.)

Lastly, pillar #3 of the Federal Reserve’s mandate, moderating long-term interest rates, looks like a given, with labor and simmering consumer prices forcing the Fed’s hand anyway. The Fed Funds Rate has been below one percent for over eight years, since the bottom of the U.S. housing bubble. The time to normalize long-term rates appears to be now, to bring all facets of the Fed’s mandate in line with its objectives. The interest rate forecast 2017 can only head higher as a result.

What is the goal of the Fed’s monetary policy? By mandate, it’s supposed to be about maximizing employment, stabilizing prices, and moderating long-term interest rates. The Fed has done a fine job meeting its first two objectives, but the time has arrived to meet the third. Donald Trump, through his policies and likely Fed appointees, will try to forestall moderating the Fed’s long-term rate objective as long as possible to finance infrastructure spending, tax cuts and deficit financing. However, much will rest on the new leadership he appoints to the Fed, and who the Senate is willing to confirm.

This is the real story that market bears will be watching into early 2018.