Could Bitcoin Become the Best-Performing Currency in 2017?

Home » News » Could Bitcoin Become the Best-Performing Currency in 2017?

When it comes to currencies, fiat paper is no longer king. There’s a new sheriff in town, and it’s making waves all throughout the digital world. Not everyone knows Bitcoin (BTC) was the best performing currency in 2016, but more folks are waking to the fact there’s a real and tangible alternative out there. With momentum on Bitcoin’s side, it could easily again become the best performing currency 2017. 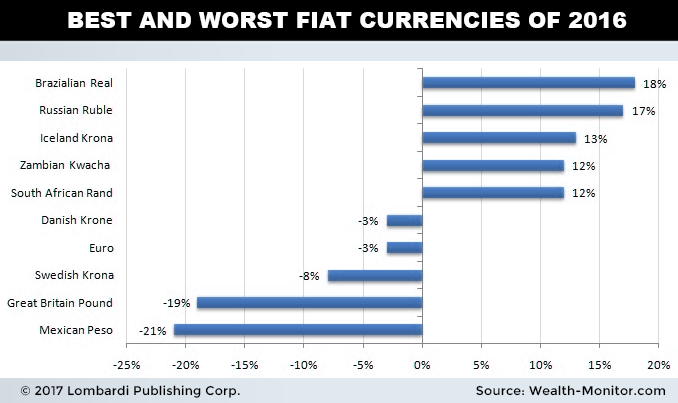 Bitcoin Could Be Best Performing Currency 2017

At the start of the year, it looked again like Bitcoin would become the best performing currency 2017. Prices ended 2016 at $956.00/USD and have risen to around $1,275/USD by early March, for another 34% gain. The price has cooled off lately, owing to factors which we’ll discuss later in the article. Still, it was an impressive beginning.

There’s been no shortage of positive catalysts in the new cycle to keep prices buoyant.

Among the most significant developments has been India’s decision to remove 500- and 1000-rupee notes from the money supply, effectively removing 84% of hard currency from circulation. This has many citizens scrambling for an alternative to hard currency, and preferably one that bypasses the banks altogether. This has increased Bitcoin’s profile on the subcontinent. As a result, Indian start-up Unocoin predicts that the number of Bitcoin users in India will grow by approximately 56% per year. (Source: “Demonetization is Leading to Another Catalyst for Bitcoin Demand and Prices,” BTCManager.com, December 2, 2016.)

This dovetails with news that the Japan Exchange Group, operator of the Tokyo Stock Exchange (TSE), has been green-lit to use blockchain technologies like Bitcoin as a core trading infrastructure. The aim is to improve the operational efficiency of trading platforms, but a mainstream cryptocurrency trading platform could emerge as the projects morph. Similar technology is currently in use or in testing phase in stock exchanges in Australia, South East Asia, and NASDAQ.

If these—and many other such corporate initiatives—experience success, big industry reaping the benefits of blockchain technology are in position to lobby the government to bring about more Bitcoin applications to the mainstream. Corporations are the real (if not main) driver of public policy through their private/public partnerships with the government. Call it a de facto “corporatocracy.” This should lend to growing trickle-down demand for Bitcoin to the consumer, possibly leading to it becoming the best performing currency 2017.

Chinese investor buying continues to be the epicenter of buying and demand, despite the government tightening control of exchange trading. This trend doesn’t look like it will reverse anytime soon, with China facing a raging credit bubble that makes the Japanese asset price bubble in the late 1980s look like child’s play. Investors are acting accordingly to protect their wealth, by using Bitcoin as one method of wealth transfer outside the country.

The world’s fourth-largest country has seen its gross domestic product (GDP)-to-debt ratio soar from 148% at the end of 2007 to around 277% before the start of 2017. It faces a triple-hydra of rapidly declining foreign currency reserves accumulated during its 25-year export boom; a massive property bubble with dozens of ghost cities and millions upon millions of vacant residential/retail properties; and slower new-normal export growth, with Trump threatening to reverse the tide of globalization.

The Chinese badly need structural reforms, but they’re following the central bank playbook to a T. Their response to a slowing and ultra-mature expansion cycle has been to pile up debt at alarming rates. Their response to a declining yuan: currency intervention. Same thing as it relates to capital controls, the tried and true measure of desperation in a bid to retain foreign/domestic capital. They’ve essentially embarked on placing structural impediments to make transferring money outside the country much more difficult.

Some of these measures are actually working. The stampede of foreign currency, which has been leaving China for years, has finally slowed to a trickle, if only temporarily. Only a net $900.0 million worth of yuan left China via payments in December, according to the State Administration of Foreign Exchange. That’s 98% less than the record outflows seen in September 2016, much less than last year’s $25.8 billion total in December. (Source: “China’s Yuan Outflows Plummet, Showing Capital Controls Pay Off,” Bloomberg, January 20, 2017.)

Even if China is successful in warding off capital outflows now, history shows that people will find a way to circumvent them. Despite the recent troubles in Bitcoin’s price owing to a crackdown by Chinese authorities on the exchanges (i.e. limiting margin on trading accounts), Bitcoin should still remain a prime vehicle to export wealth abroad.

About the only thing seemingly able to stop Bitcoin from being the best performing currency 2017 is Chinese government intervention disturbing the free market.

Will Bitcoin Become the Best Performing Currency in 2017?

Notwithstanding China’s overt efforts to tamp down on Bitcoin’s popularity, there is a second factor negatively affecting price currently. It’s something known as a “hard fork” and it has investors nervous.

In a nutshell, proposed software updates are threatening to change how the Bitcoin network functions. Two factions are pushing for “Bitcoin Unlimited” (BU), and “Segregated Witness” (SegWit) to be used respectively. Both cannot co-exist because they would “fork” the Bitcoin network, rendering two competing cryptocurrencies.

So why is this happening anyway? Essentially, Bitcoin has become too popular for the network to process transactions efficiently enough. Bitcoin transactions are processed in blocks of cryptographic script to verify and confirm transactions. But as more transactions are taking place, the one-megabyte size limit on blocks built into the system is too clunky and is causing transaction delays too onerous for customers and vendors alike. Transaction times are already up to 13 minutes on average, with a significant percentage taking over 30 minutes. It’s hard to imagine profound wide-scale payments applications going mainstream at those rates.

The various factions within Bitcoin have long recognized some change would be needed. Without it, there is a risk that vendors and companies would simply choose to migrate to other platforms or solutions. There’s also the risk that Bitcoin’s potential as a viable payments technology could be stunted.All the Bitcoin news surrounding two different BTC versions, a dilution of the brand, and overall confusion are currently roiling the markets. BTC’s price has tumbled over 25% in the month of March 2007 alone, before recovering to $1,050/BTC as of this writing. The hard fork issues are largely responsible, as the market had fully recovered from the China’s BTC exchange clampdown in January/February. While concerns are certainly legitimate, there’s much reason for optimism.

Competing cryptocurrency Ethereum went through the same ordeal. It went through at least four hard forks, which resulted in the creation of two competing currencies: Ethereum Classic (ETC) and Ethereum (ETH). Prices tumbled about 50% from the hard fork date to the end of December 2016. But, once the market fears dissipated, and ETH became firmly established as the market leader of the two Ethereum versions, prices began to skyrocket again. In fact, ETH has increased over 700% since the end of December 2016, with the hard fork issues behind them.

Prior to the hard fork, Ethereum investors had similar concerns. The complications involved would leave people stuck on an incompatible chain; the infighting in the community would result in weaker miner cooperation; the dilution of the brand would leave two or more types of Ethereum on the open market. In the end though, Ethereum has rebounded and undertaken a much stronger position in the marketplace, measured by price and blockchain robustness.

Should Bitcoin get through the hard fork issue and break new highs, the sky’s the limit for the Bitcoin price outlook 2017. My Bitcoin forecast could be the next stop once the last pillars of angst get kicked out. There should be little in the way of technical resistance once the hard fork issue gets resolved. Ethereum has already provided precedent that a cryptocurrency can emerge from a hard fork in a stronger position, and Bitcoin is primed to do the same.

My Bitcoin price prediction is a reflection of the belief that Bitcoin will also pass the hard fork test. I believe that history will show it to be a bump in the road on the path to greater stability and viability as a transacting currency.

Bitcoin was the best performing currency of 2016, and I wouldn’t be surprised to see triple-digit upside again in 2017.