The companies in the top junior lithium mining stocks list 2017 have been preparing for this occurrence since 2014, by scouring for new supply and ramping up modest production. I’ll set out all of the junior lithium miner stocks that are publicly listed in North America so you can consider your investment options. With a little luck, maybe you’ll find the next four-bagger stock.

With so many options available to investors, why look at lithium? Great question. Certainly, there’s no shortage of other sectors doing splendidly well in this “everything” bubble we’ve been witnessing. Technology, consumer discretionary, materials, healthcare, etc. all have done spectacularly. In truth, besides select sectors like retail and energy, almost everything has outperformed since the U.S. housing bubble imploded and the S&P 500 pivoted at 666 in 2009. It has been an historic bull run without question.

But, unlike other growth-challenged sectors that have appreciated mostly on historic valuation expansion (which is unsustainable), lithium usage offers a splendid growth profile. Usage of lithium-ion batteries is exploding throughout the world, and not just from automakers. Drones, power tools, phones, tablets, and wearables are all taking advantage of advances in power capacity and weight/size reduction that traditional batteries don’t offer. Although lithium ion-batteries are the growth driver, it actually accounts for a minority percentage (around 35%) of lithium use today. Lithium is a critical component of other industrial gases, solvents and polymers.

However you slice and dice the numbers, demand is exploding, but supply is not doing the same.

This is a huge problem, since demand for lithium in China alone should top 100,000 tons by 2020. For every 100,000 electric vehicles, between 5,000–8,000 of battery-grade lithium carbonate will be needed. And the production of these vehicles from most of the major automakers is taking off. (Source: “Lithium Carbonate Market China and Global 2020 Forecast Research Reports,” PR Newswire, January 20, 2016.)

Leading this demand surge is Tesla’s Gigafactory production plant in Nevada. Mass battery cell production for their storage products and “Model 3” automobiles commenced in January 2017, and the numbers are breathtaking. The company expects that, by Q2 2108, the Gigafactory will produce 35 GWh per year (35,000,000 kWh) of lithium-ion battery cells, accounting for almost as much as the rest of the world lithium battery output combined! That is not a typo, and it exemplifies the breakneck demand gripping the industry. (Source: “Tesla Gigafactory,” Tesla Inc., last accessed July 10, 2017.) 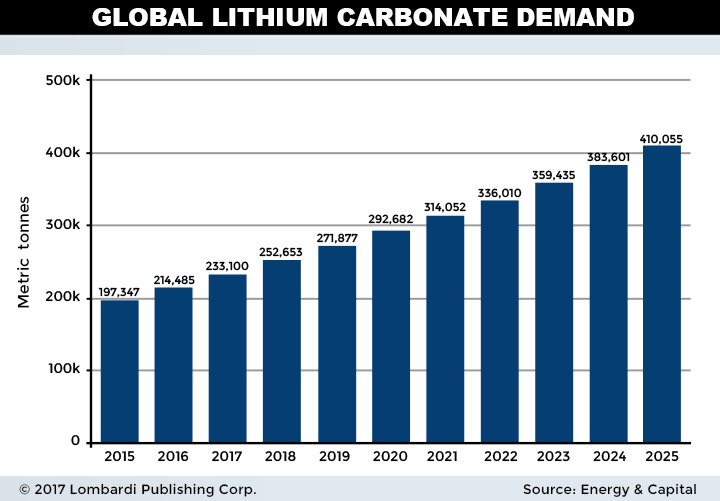 What does it mean for investors?

Assuming that the supply/demand imbalance is likely to stick around for the foreseeable future, the winners on the junior lithium mining companies list could be lucrative investment portfolio plays. Why? Because lithium, as with any mining entity, takes several years from discovery to ore production, even when an economically feasible property is found. There are the indicated and inferred mineral assessments, environmental studies, financing negotiations, and political wrangling. Even when projects get green-lighted, delays are the norm rather than the exception. Much can go wrong in technically-challenging environments related to mine openings.

Lithium extraction is a more time-consuming and technical process than other alloys. About 80% of global reserves are found in the salt brines of South America (about 50% coming from Chile). Extracting lithium requires multiple steps to separate it from other alloys and impurities. The first step, called solar evaporation, takes a full four months before the extraction process moves downstream. Without going into full specifics, this should give you an idea of the time-consuming and costly nature of lithium extraction from salt brines, and why you can have confidence that supply/demand imbalances should stick around for a long time.

From a more macro perspective, lithium miners are subject to the same business-cycle forces as all others. In periods of strong world growth (particularly in industrialized countries), prices will be supported. At the beginning of a business cycle, junior stocks are often the best to consider. That’s when valuations (coming off of a recession) are usually the cheapest, and hope of prolonged growth springs eternal.

In periods of weak global growth, the opposite is true. Interest in speculative assets starts to wane, and capital flight gravitates toward more quality names. Investors should be mindful that junior miners often get beaten down severely because of their lack of cash flow. Many will need significant financing to continue drilling operations (or even just to keep the lights on). That often means equity dilution, which devalues existing shares when more are issued. Raising capital is harder when commodity prices are falling.

When you boil it all down, often “hope” is all that junior miners really have. Investors buy into the potential more than anything else. It’s hope that the next great property is on the horizon; hope that commodity demand will soar above expectations; and hope the one or two promising properties yield production somewhere down the line.

Hope is a powerful aphrodisiac to investors starved for the next big thing. There’s nothing wrong with using risk capital, but, with junior miners, timing is everything. That’s why junior miners are poor investments in declining business cycles; hope drains away. Only the well-financed companies with long-term catalysts generally survive the contraction without getting crushed.

Either way, the supply and demand problem is the epicenter of investor enthusiasm re-emergence within the junior lithium mining stocks. That’s why junior lithium stocks might hold up better than its peers during the next crisis. There’s simply too much demand out there for the strong ones to go into hibernation mode. Strong demand for lithium-ion batteries won’t abate much even if the world slips into economic upheaval. There is too much potential for cost savings, convenience, and environmental benefits to turn back now (although demand will eventually slow, like demand for everything else).

The best junior mining stocks are out there, but investors have to know what to look for. One way is to subscribe to the Lombardi Letter Investment Newsletter for our favorites. But, for those willing to go it alone, here are some key things to look for.

Before I continue talking about junior lithium mining stocks, I’d like to mention that many of the primary junior mining stocks to watch are far away from production. For example, when Canaccord Genuity Group Inc (TSE:CF) initiated coverage on four of the largest lithium exploration and development companies listed on Canadian exchanges, their top pick, Critical Elements Corp (CVE:CRE), didn’t expect to produce ore until 2021. That’s quite a long time out.

There are other companies that offer shorter  production timeframes however, so you’ll have to weigh the pros and cons of quicker cash flow versus property quality, debt levels, etc. Most junior mining companies don’t have a ton of free cash lying around, and investors always have to consider dilution.

If you’re looking for American pure-play junior lithium mining stocks, you may be out of luck. The notable ones are mostly of the mid-to-large-cap variety, such as Albemarle Corporation (NYSE:ALB). If you want to keep your junior lithium mining stocks grounded in North America, investing in Canadian companies is likely your best option. This is less of an issue in today’s world, but notable nonetheless.

Finally, while there is a semi-popular lithium ETF, none of its holdings are junior lithium mining stocks. They tend to be either larger miners, which aren’t pure-play lithium stocks, or companies like Tesla, which make vehicles powered by lithium batteries. Certainly, large consumers of end-use lithium are valid lithium plays, but they are demand-side while miners are supply-side. Both are interconnected, but trade off of very different dynamics.

Listed on TSX or TSX Venture

With an annual expected growth rate of 30% through 2025, lithium stocks will continue to attract attention in a growth-challenged world. Supply and dynamics will continue to skew toward shortages, creating a “put” in the commodity price. Lithium should continue to be one of the rare growth sectors in an otherwise staid, predictable world of commodities.

Finding the ultimate winners won’t be easy, but it rarely is with junior miners. But, if you conduct strong due diligence and maintain a strong investment thesis, you should be in good shape. The sector is poised to deliver the right conditions for success.